Capt. Claude Hamilton Harris, M.C., commanding No. 2 Co., Seaforths, in a letter to Mr and Mrs Meikle says: “Your son on the fatal day did deeds which will last for ever in the memory of all who knew him. Your boy has been under my command ever since he joined the Battalion, and I therefore saw him under all conditions of life in and out of action. To tell you what I thought of him is absolutely an impossibility, as I cannot praise sufficiently his beautiful character, or describe his wonderful personality. To replace him is an impossible thing, and I assure you his loss is deeply deplored.”

The Directors of the Glasgow, Barrhead and Kilmarnock Railway, with whom Sergt. Meikle was employed as a clerk at Nitshill station before joining up, writes: “His record of most conspicuous bravery is one which has gained the admiration of everyone, and my Directors feel sure that the noble services he has rendered will be to you a proud and lasting memory. My Directors are gratified to recall that, before joining His Majesty’s Forces, he was a faithful member of the staff of this railway at Nitshill station, and they regret exceedingly that your gallant son was not spared to enjoy the high distinction which he attained and to wear the coveted V.C. which he so nobly won”.

“I am sure you would like to know early,” writes a distinguished officer of Sergt. Meikle’s battalion to Colonel Mason Macfarlane, C.M.G., who took the battalion to France and led it into action for its baptism of fire at Neuve Chapelle, “that the old battalion has at last got a V.C. The winner is Sergeant Meikle, a most excellent N.C.O., who distinguished himself greatly on the Marne. He attacked an enemy M.G. post by himself, advancing for about 150 yards over open country, killing the crew with a revolver and stick. He then went on and tried to knock out another M.G. crew, armed only with a stick. He was killed just by the gun, but he enabled other two men to come up and finish the crew off. It is one of the greatest acts of individual bravery I have heard of, and one is proud and glad it should have been performed by an officer of this battalion.”

Sergeant Meikle joined the 2/4th Seaforths on the 8th February, 1915, when barely 19 years. He was trained at Bedford, Fort George, and Blair Atholl, being one of the hardy band to cross the Grampians on the long trek between the Fort and the Blair. He went to France on July 30, 1916, and although wounded on two or three occasions, never seriously, had only been home on furlough, his last leave being in November, 1917, shortly after the battle of Cambrai. He had a high reputation in the battalion throughout, and it was felt that when he got the Military Medal for gallantry in action on September 20, 1917, he had won it well. Sergt Mekle received a gold watch from the people of Nitshill when home on furlough, and was promoted sergeant on returning to France.

The son of a very worthy couple, Mr and Mrs Meikle, Nitshill, Renfrewshire, his father is an old soldier, who served in the Royal Garrison Artillery and holds the Burmese Medal. Sergt. Meikle was brought up from childhood in connection with the Primitive Methodist Church, Pollokshaws, of which, although three miles from the home, the family, on the testimony of the Rev.F. J. Sainty, pastor of the congregation, are “among the most faithful adherents. Sunday after Sunday throughout the year they are found in their places at the forenoon service; the parents and two sisters are adherents.”

Fourth Seaforths everywhere, lamenting as they must do the death of a hero so brave and a soldier so valiant, rejoice in the proud honour and distinction he has brought to a battalion as famous as any in the glorious Division with which its identity will ever be associated.

In August 2018 the Ross-shire Journal reported on the honour to John Meikle, VC, in his home town of Kirkintilloch, the account of which is reproduced courtesy of the Editor.

To mark the 100th anniversary of the act which earned John Meikle the Victoria Cross a memorial slab was unveiled in Kirkintilloch.  His VC made the journey from Dingwall Museum for the moving ceremony, accompanied by members from 4 Scots – the direct descendants of the Seaforth Highlanders – as well as veterans from the Queen’s Own Highlanders. 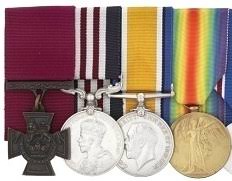 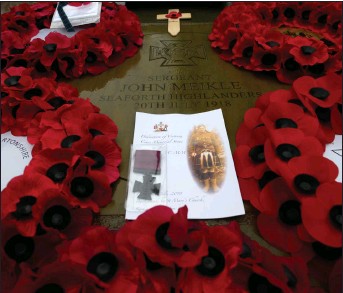 John Meikle’s Victoria Cross was placed on top of the new memorial during the ceremony. [Photo courtesy of The Ross-shire Journal.]

Sergeant Meikle is buried in Marfaux military cemetery in France. As well as his medal, Dingwall is also home to a memorial honouring him. The latter is adjacent to Dingwall Station and was relocated there in the 1970s from its original site at Nitshill Station in Glasgow, where Sergeant Meikle had worked before the war. 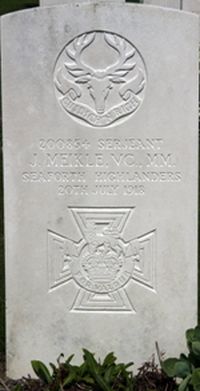 To read more about the Newspaper article that appeared in the Ross-shire Journal on 1st November 1918 or find out more about Memorial to John Meikle in Dingwall click on the buttons below.