The following is an excerpt from ‘ The Romance of a Royal Burgh’ by Norman Macrae, first published in 1923 (page 56.).

James IV took a direct and personal interest in his Ross-shire properties, and made several visits to the Castle of Dingwall (these will be referred to in the next chapter), Kinnairdie Farm being specially called upon to provide not only for the King but for his deputies.

In 1507, James appointed Andro, Bishop of Caithness, his Chamberlain of Ross and Custodier of the Royal Castles of “Dingville” and Ardmeanach (Redcastle).

The Bishop held office for nine years, and he was given the rents of lands, woods, and castles partly to help the repairs of Dingwall Castle and the Red Castle.

Interesting references to Dingwall Castle are made in the reports furnished to his Royal master by Governor Andro. From these we gather that extensive repairs and additions were made to the Castle on account of (1) an attempt made by Red Hector, Tutor of Kintail, to seize the stronghold and so possess it by right of might – the Mackenzies of Kintail made several attempts previously to possess themselves of Dingwall Castle, but no Mackenzie held it until its glory departed, when it came into the hands of the Rev. Colin Mackenzie of Fodderty, who was the grandfather of the wife of Dr Kennedy of Dingwall – and (2) the incursions of west coasters under Sir Donald Macdonald of Lochalsh, the Macdonalds coming and going for thirteen months. During this anxious time the Bishop-Governor records that he had to provide additional defence works and to employ extra soldiers. A “perch of land” was bought from some person in the town (quite an interesting fact) for the purpose of bringing the “pit” to the Castle (what the “pit” was is not defined) and in order to strengthen the defences he bought “engines of war – serpentines, hagbuttis, culveringis, hand-bowies, arrows, halberts, laith-axes, jeddart staves, the powder callit lezgunpulder. . . and mony utheris thingis.”

Governor Andro attended to the amenities of the Castle grounds as well as to the defensive strength of the structure. One of the three remaining ruin-relics of the Castle is what is still known as the “doo’ cot.” This originally was one of the corner towers of the old Castle, but was transformed by the Bishop into a dove cot after the type of the Norman towers, with low domed vaulted roof, having nest holes built into the wall on the inside. 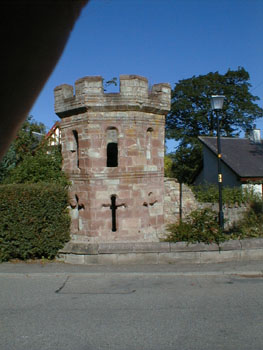