Dingwall Of Old – a Virtual Tour

Dingwall history in old photographs - a virtual stroll around the town

On this page you will see extracts from a virtual tour via photographs.  Please view the photograph album at the bottom of this page for the full tour. 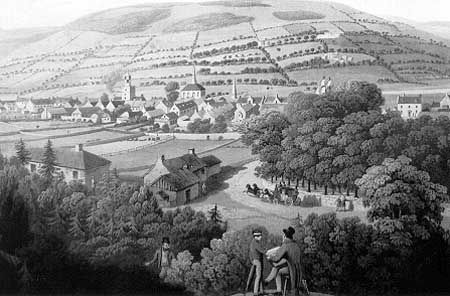 Clark’s print of 1824 with the main road arriving at what is now Hill Street.

Contractors for New Post Office: The following are the contractors for the new Post Office, the foundations of which are now being cleared. Mason, Wm Maclean, Dingwall; carpenter, Wm Macdonald, Dingwall; slater, James Gray & Son, Inverness; plumbers, R Mackenzie & Son, Dingwall; plasterer, Roderick Ross, Invergordon; painter, Hugh Ross & Son, Dingwall; blacksmith and tile work, the Rose Street Foundry Company, Inverness. The new building, which occupies a convenient site, will be fitted up throughout with the electric light. The plan, which has been specially arranged by the Post Office authorities, shows that the building will be a commodious one, and will greatly facilitate the working of the staff. The building will have an ornate frontage of well-dressed freestone. The architects are Messrs Ross & Macbeth, Inverness. [Information supplied by Caroline Vawdrey.] 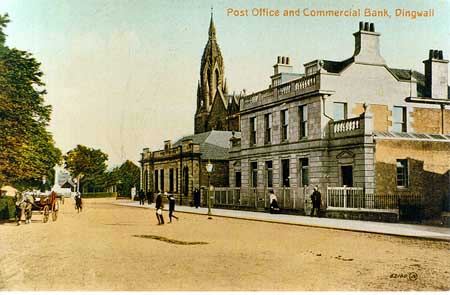 The National Bank of Scotland

Across from the Free Church, this building was the National Bank, then headquarters of the North of Scotland Hydro Electric Board and, currently, the Highland Theological College.

The original Royal Bank of Scotland operated from a small unit within the offices of T S H Burns & Son, solicitors, Park Street, until (early 1960s?) a new bank was built on the site of a former garage at the corner of Hill Street/HighStreet, where it served the public until it operated from the bank premises adjacent to the Post Office.

The unoccupied building was purchased by Ross and Cromarty District Council and became the Motor Taxation Office, then sold to become a frozen food shop, after which the Post Office acquired it on moving from their Park Street/High Street site, where it continued operating until moving to a unit in the Spar Shop at the other end of High Street. 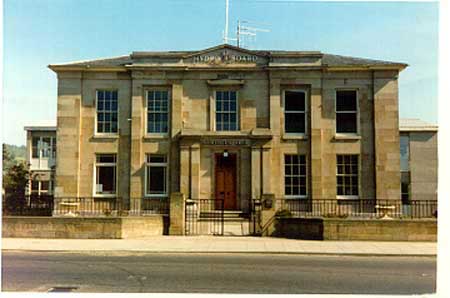 At the end of High Street, where the road continues to Strathpeffer, and now adjacent to the Highland Council offices, stood “the boys’ hostel” where generations of boys from the west coast of the county lived while continuing their secondary education in Dingwall Academy. This originally was the home of Provost Robertson whose daughter married Prime Minister William Gladstone. 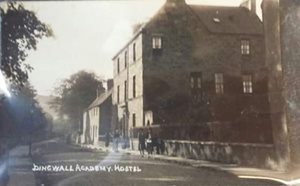 At the junction with Tulloch Street was Lewis Fraser, saddler. [Ross and Cromarty Heritage Society is grateful to Miss Anne Fraser, Dingwall, daughter of Lewis M Fraser, for permission to copy the postcards which she owns.]

This postcard shows a youthful Lewis M Fraser with a younger brother, Francis, who eventually became curator of the Natural History Museum, London. At the age of 18, Lewis completed his apprenticeship as a saddler prior to the unexpected death of his father, James, leaving Lewis to support a large family of brothers and sisters. During the Second World War a sister, Jessie, had been on holiday in Dingwall when France fell, and she decided to return to Jersey to collect her belongings. Alas, the Nazis were in occupation and Jessie was interned for the remainder of the War. Another brother, Jim, had a distinguished career with the Forestry Commission. [Information supplied by Miss Anne Fraser.] 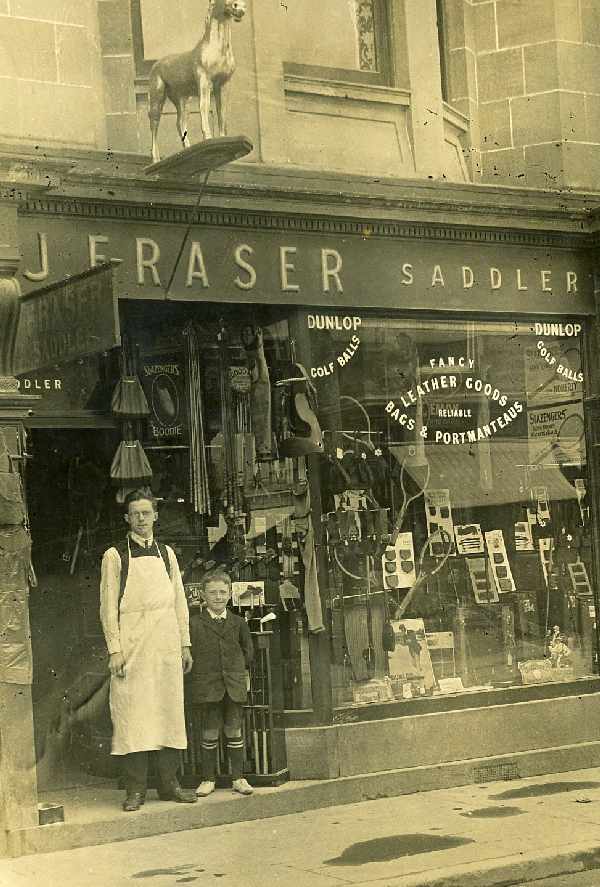 Man on left standing outside what is now Boots, chemist. Shop on right became shoe shop (Easifit), later Pullars (drycleaners) and in 2010 is a Pizza supplier. The door on High Street became a single window during post-War alterations when the corner with Tulloch Street was replaced with a pillar and the entrance was a diagonal between the two streets. The building was refurbished in 2008-09 following the closure of Pullars and the entrance in 2010 has reverted to that of pre-War.

In September 2011 an article by John Macleod appeared in the Ross-shire Journal identifying the child in the pram as Munro Stewart, a Dingwall native now retired and living in Conon Bridge. Munro had seen this photograph during a visit to Dingwall Museum (as it features in the museum’s calendar for 2012) and volunteered some information.

Munro had seen the photograph originally when he and his wife Morag were house-hunting and had gone into a local cafe where the picture was displayed on a wall. Munro recognised his mother, Margaret, with a friend, possibly Chrissie Dunbar who lived in Ferintosh distillery buildings. He estimates that the photograph would have been taken around 1932 when he would have been two-and-a-half years and when the family lived in Leopold Place.

Dingwall forebears for Munro are grandfather George, who was a local butcher and lived in Rose Cottage, Tulloch Street, long since demolished, and father Jimmy, who was a popular auctioneer in Fraser’s Auction Rooms when they, too, were located in Tulloch Street.

Munro’s own background reveals that he was captain of Dingwall Academy football team prior to playing for Dingwall Thistle and Ross County. Called up for National Service in 1947, he served in the Royal Signals before resuming work in the finance department of Ross and Cromarty County Council. He also worked in councils in Wick and Dunoon before joining Argyll and Bute as director of finance until his retirement in 1990.

[Information in article reproduced by courtesy of the Ross-shire Journal – editor@rsjournal.co.uk ] 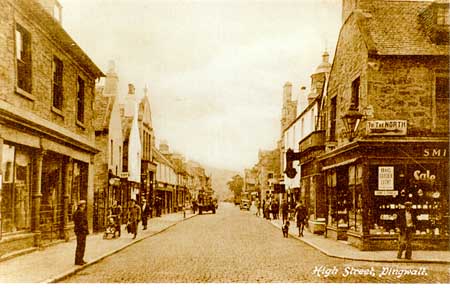 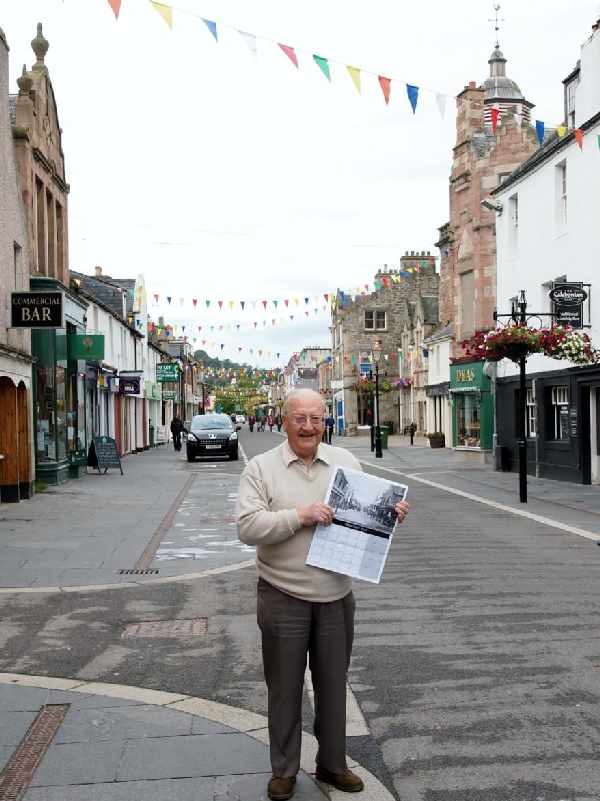