Hector Archibald MacDonald was a fine solider who rose from the rank of private to become commanding officer of a Highland Brigade in the time of Queen Victoria. An almost impossible feat when the only entry into the Commissioned Corps was by the right of birth, wealth and by the proper connections.

He was the son of a Crofter (small farmer) in the Black isle, across the firth from the monument. He enlisted into the 92nd Gordon Highlanders on the 11th of June 1870, having previously served with the local volunteers. On enlisting into the regular army, Hector MacDonald took his soldiering very seriously from the outset. This dedication and his application to his army career ensured his rapid promotion through the ranks to become a high ranking officer. During his service in the Queen’s Colours, he served in countries such as India, Afghanistan, South Africa, Ceylon and the Egyptian Sudan, for which he received numerous decorations and orders.

Due to grave charges brought against him by high ranking officials, he took his own life while staying in a Paris hotel. These charges were never substantiated.

MacDonald was subsequently interred in Dean Cemetery in Edinburgh. An obelisk memorial with bronze bust was erected over his grave in 1905.

Sir Hector is also remembered by a slender telescope-like tower memorial at Mulbuie, near his birthplace. 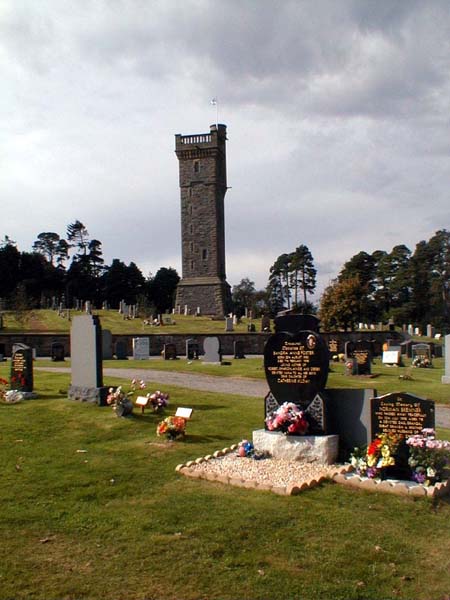 But the most significant monument to MacDonald is the national memorial in Dingwall. This was constructed between 1904 and 1907 (architect James Sandford Kay), its hundred foot high tower dominating the hillside above the town. Its main features are slender whinstone tower projecting from the rubbly sandstone base and the balistered parapet around the corbelled top platform. This in turn is surmounted by a castellated cap-house. Panoramic views may be obtained from the top of the monument on a clear day, giving a true impression of the northern Highlands, as well as the ancient burgh of Dingwall in the hollow below. Settlement was confined to the south side of the river Peffrey and when the monument was erected development did not extend north of the Peffrey until after the War. During this period, the population rose from 2800 to the present 5000.

Further information on the life of Sir Hector MacDonald can be obtained in “THE RANKER” by Kenneth I.E. Macleod, available from the Dingwall Museum Trust, Town House, High Street, Dingwall IV15 9RY.