On 1 May 2017 Dingwall Station was the scene of a ceremony reflecting the role it played during World War 1 during the time when a troop train, which became known as the Jellicoe Express, passed through on a regular basis..

In 1917 a route was introduced to run a daily service direct from London Euston to Thurso, the nearest station to Scapa Flow in Orkney where the Grand Fleet was based. At just over 700 miles, it was Britain’s longest rail journey and is calculated to have transported almost 500,000 military personnel, as well as the fleet’s mail, between 15 February 1917 and 30 April 1919. Up to 500 personnel could be packed into each train and the journey took about 22 hours.

At the time the railway was the only means of transport capable of moving large numbers around the country. Air transport was not advanced enough and roads could not accommodate heavy and continuous troop movements. The alternative was by sea, which was slower and dangerous because of the presence of German U-boats.

Refreshment stops were provided at intervening stations and Dingwall Station has a plaque commemorating the 134,864 cups of tea served during the entire War by Red Cross volunteers.

The Jellicoe Express was named after Admiral Sir John Jellicoe, Commander of the Grand Fleet at the outbreak of World War 1, who was later First Sea Lord. He led his ships from Scapa Floe to fight the German High Seas Fleet at the Battle of Jutland in June 1916.

The ceremony in May 2017 saw a chartered steam train arrive at Dingwall Station with on board Johnny Jellicoe, the admiral’s grandson, Captain Chris Smith, RN, Naval Regional Commander for Scotland and Northern Ireland, and Mrs Janet Bowen, Lord Lieutenant of Ross and Cromarty. They were met by members of the Royal Naval Association prior to the unveiling of a commemorative plaque to join the one awarded many years ago. 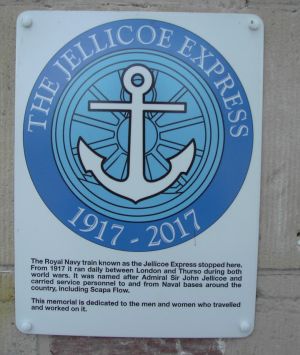 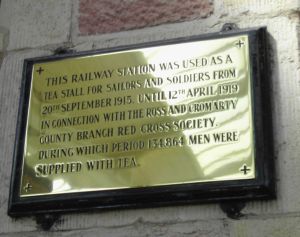