Just fourteen miles north-west of Inverness, at the mouth of the River Peffery which drains into the Cromarty Firth, lies the ancient and Royal Burgh of Dingwall (received its royal charter in 1226 from Alexander II), a town which has enjoyed a prominent and colourful past that is still apparent today.

The town, which lies in the shadow of Ben Wyvis (3429 feet), is not only renowned for its cultural and historical heritage but has, along with the surrounding area, an abundance of natural heritage. Many of these areas have received recognition of this by being designated as sites of Special Scientific Interest, the Cromarty Firth being most notable.
With the current population around six thousand people, Dingwall is a community consisting of a melting pot of cultures, both modern and ancient, of which the most notable connections are Norse and Celtic. The name “Dingwall” is Nordic in origin and is said to mean a “parliament or meeting place” which refers to the period of occupation of the town by Thorfinn the Viking, Earl of Orkney.

Dingwall is also infamous for its alleged historical connections with Macbeth (of Shakespeare note) and Robert the Bruce (Champion of Scottish Independence in the fourteenth century!)

The architecture inherent in the town’s structure is impressive and reveals its ancient nature, features that have been documented in the works of well-known local photographers such as F W Urquhart and John Munro whose pictorial records date from the latter part of the nineteenth century.

Most notable in the town are the various war memorials dedicated to the local Seaforth Highlander soldiers who fought in both the world wars.

Exploration of these and other topical themes will be the aim of the following pages, to reveal the vibrant heritage of this ancient province. 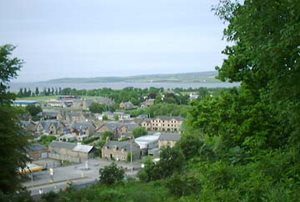 View of Dingwall and the Cromarty Firth from Mitchell Hill