Many of the photographs featuring in the Dingwall section of this website have come through the co-operation of Dingwall Museum and it seems appropriate that ‘Dingwall Folk’ should include Mr Ian Macleod to whom RCHS owes a great deal of appreciation. [Photograph and text are courtesy of the website of the Lord Lieutenant of Ross and Cromarty, Mrs Janet Bowen.]

On Friday 17 June 2017 Mrs Janet Bowen, Lord-Lieutenant for Ross and Cromarty presented Ian MacLeod with a BEM for his services to Dingwall Museum and to the Community at a packed reception at Dingwall Town Hall.

Over the years Mr Macleod has seen the museum in the early 18th century Town Hall grow from two upstairs rooms of local exhibits to a VisitScotland four-star attraction. Mr Macleod was keen, however, that the honour would also be seen as a reflection of the hard work of the team of dedicated volunteers constantly working “behind the scenes” at the museum.

In addition to his work at the museum, Ian has been an active member of the Seaforth Highlanders Association for years. 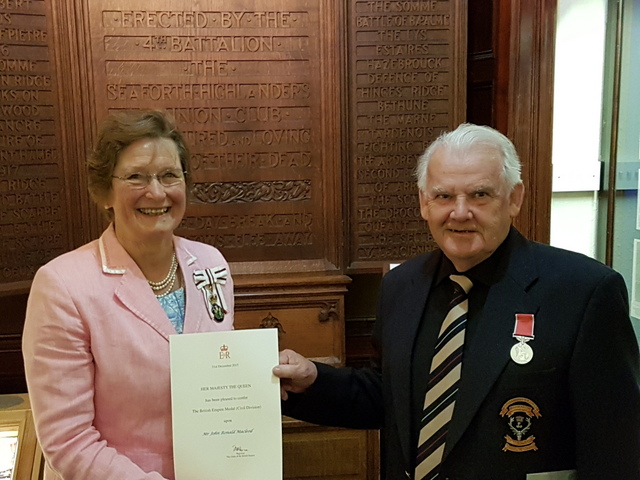 Speech by Mrs Bowen, Lord-Lieutenant for Ross and Cromarty

In her brief introduction Mrs Bowen said: John Ronald Macleod and yet we all know him fondly as Ian! There is nothing that happens in Dingwall now, or has happened in Dingwall over the past hundreds of years that Ian does not know about or has a story about.

Ian has been, and is, a brilliant ambassador for Dingwall and its regimental history, travelling far afield, but also answering endless letters of enquiry sent by sons and daughters of Dingwall now dispersed across the globe. You only have to point to one medal or bit of uniform in the Museum and you are in for a treat; Ian will know where, how and who won it, or wore it. He will give you the family history and the little snippets that bring that person to life. He has the visiting schools, and me, mesmerised.

If Ian was made of seaside rock his spine would have ‘Dingwall’ written right down its full length in red letters!

Ian has devoted a lifetime to serving his community which includes 37 years as the voluntary Curator of our Museum, but during all that time, in parallel, he has given his dedicated support to all things military, in particular to the Seaforth Highlanders Association. He has held both roles of Chairman and Secretary, he has run the Branch Annual Dinner, which includes ex-Seaforths from all over Britain.

His involvement with the Seaforths and the British Legion has brought him in close contact with the members and their welfare. He ensures that the Branch’s very elderly members and the widows of ex-members are not forgotten, and as a result he is held in high regard by all.

Whenever there is a special wartime memorial or Royal occasion, Ian can be seen weeks before with a full toolkit and paint brush creating some memorable window display for the High Street to entice visitors in to visit the Museum, and to inform the locals. Ian could have been a professional artist, sculptor, joiner or even an engineer, his creative skills are legendary. He has been a faithful, dedicated volunteer.