The Rotary Club Of Dingwall

The average membership is 43 and is representative of a large variety of businesses, professions and vocations. These include among others: industry, commerce, service organisations, education, law, religion and local government.

Members are committed to serving the community with special emphasis on youth programmes and on helping the aged. Many hours are invested each year raising funds to support these projects and to administer them. In addition, the club has a history of promoting and providing aid to needy communities overseas.

Visiting Rotarians will be made very welcome. Please contact through the Rotary Directory or by informing the Tulloch Castle Hotel (01349 861325). The current President is ?? 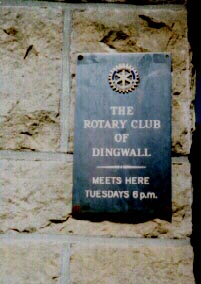 Among the many events organised by the club is the popular ‘Wade Walk’ which covers the route from the Wade bridge at Garbat, Garve, through Achilty forest, skirts Strathpeffer, traverses the Knockfarrel ridge, passes through Lochussie and emerges at the Knockbain area of Dingwall. This is a major fund-raising project of Rotary. The next Wade Walk takes place on 6 June 2009.

Great Feil Maree
In recent years the club has revived the Great Feil Maree, the last of which was held in 1880. The Feils, or Fayres, were a highlight of Highland life for many years and Dingwall was one of the main venues. The feils brought people together and provided an opportunity for buying, selling, amusement and “getting the crack”. Probably the most important event in the local calendar was the Great Feil Maree which was held on the first Wednesday of September each year.

In 2006 Dingwall Rotary Club re-launched this event as a traditional feil but with a modern flavour, providing entertainment for young and old, including music from local instrumental groups and choirs; display of vintage vehicles; produce stalls; charity stalls; traditional craft displays; and many others.

The publicity material urges everyone to “have a great day, enjoy the entertainment, grab a bargain and have fun”.