‘The Picture House’ began life as a Masonic Hall, the foundation stone being laid on 3 October 1870 and the building opened on 17 April 1871. It continued to fulfil its function but the owners generously allowed the population to use it for important occasions (see photo opposite) and social occasions, such as concerts and ceilidhs, until the Town Hall was enlarged.

A new Masonic Lodge was built at the west end of Dingwall and, following the First World War, the building was sold to Lady Seaforth. In the early 1930s it was sold again and, on 31 August 1931 ‘The Picture House’ opened and continued to entertain generations of local folk until it closed early in the 1970s. It has had a chequered career since then, mainly as a bar and disco venue. 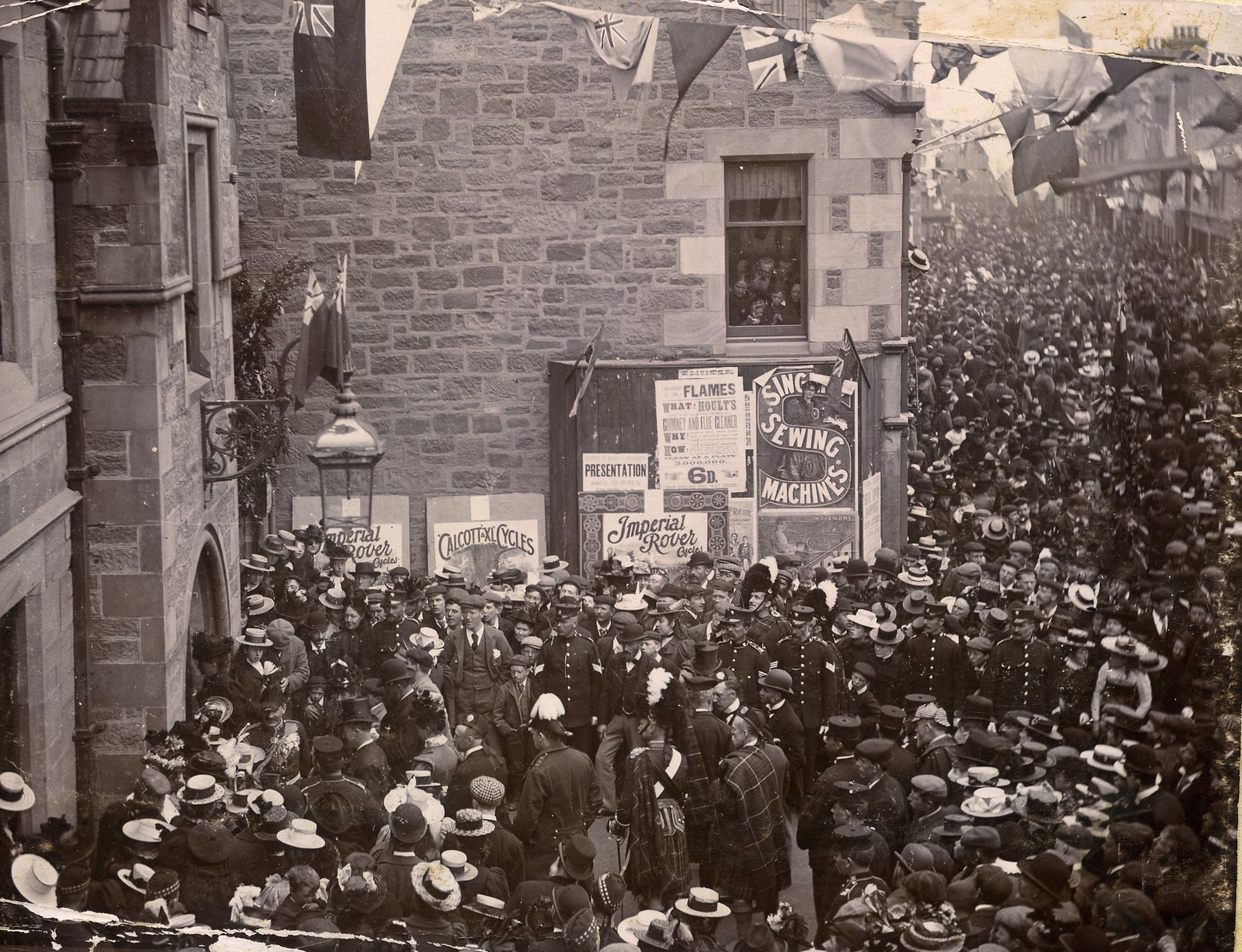 The crowd at the Masonic Hall, Dingwall in May 1899 when Sir Hector Macdonald awarded the Freedom of Dingwall.

Extract from the Inverness Courier of 14 August 1889:

Dingwall – Masonic Hall. Yesterday the Brethren of the Fingal Lodge of Freemasons met to re-lay the foundation stone of the hall. Owing to the new Post-office being built out nearer to the public street, the Masons resolved to have the hall extended two feet further out than the Post-office building, consequently the first foundation stone had to be removed. The ceremony was performed by Mr Kenneth Grant, late of Kinellan, the oldest mason. When finished, the building will have a very attractive frontage. It is proposed to have offices in the new addition. [Extract courtesy of Caroline Vawdrey.]

“Time at the Dingwall Post Office
“Sir, I am sure you will agree with me that a clock should be displayed in the Dingwall Post Office. There is at present no clock in or about the establishment visible to the public, and the result is inconvenience, and, often, disappointment. Should the postal authorities refuse the convenience – which I am sure they will not – I, for one, should be glad to contribute my mite toward the acquiring of a clock, to be displayed either over the door or in the Post Office. It is a pity that such a well-conducted establishment should lack this much-needed convenience – a convenience which I hope, however, will soon be granted us. I am, yours truly, A Trader.” [Extract courtesy of Caroline Vawdrey.]

Morganti’s was owned by the Morganti and Simonelli families who came to Scotland following the First World War and quickly established their restaurant in premises originally occupied by the Post Office. This became a popular venue, noted for its ice cream and excellent cuisine. A second, smaller, shop (known locally as Little Morganti’s) was situated on High Street but was demolished when Boots the Chemist was built.

During the duration of the Second World War the families (now described as “enemy aliens”, although few in Dingwall regarded them as such) were interned in Largs and administration of their business was carried our by local chartered accountant Mr C G Macdowall.

Following the War, the families returned to Dingwall and continued to trade well into old age. 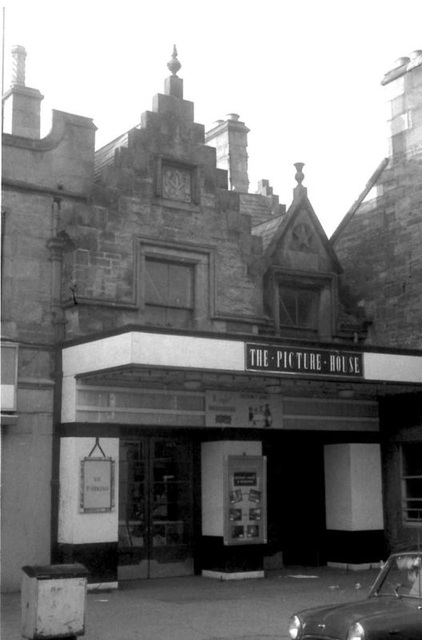 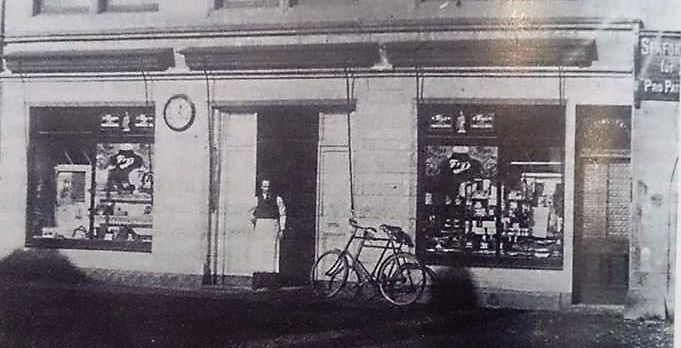 Mr Sestilio (“Joe”) Simonelli at the front of Morganti and Simonelli’s shop, on High Street, in 1923. This was formerly the Post Office (note clock) and was adjacent to the Masonic Hall, later The Picture House.

Demolition uncovered the faded sign, above the clock, proclaiming what Morganti’s had to offer – Refreshments – Saloons – Confections

In November 2018 it was announced that the site had been acquired by a developer intending to convert it into 17 flats as well as refurbishing the existing retail premises, and in the summer of 2019 demolition began. 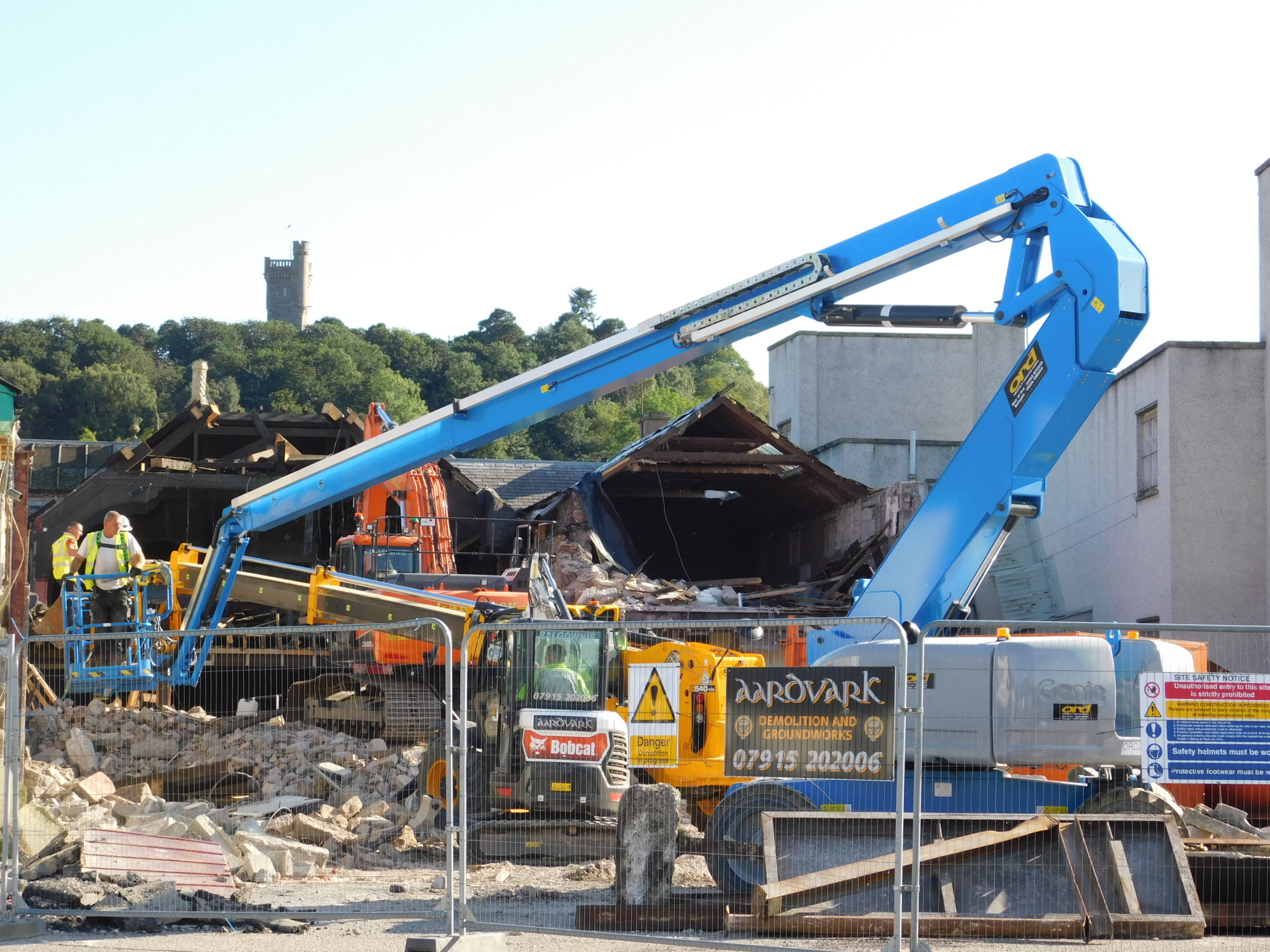 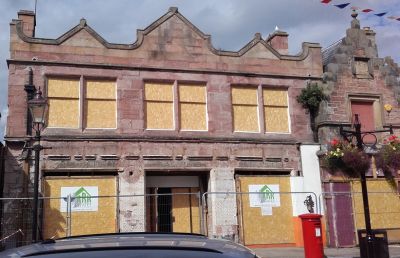 The front of Morganti’s. The site of the original post office clock is clearly visible.

Life for a beam

As demolition progressed, Anagar Vinke, a woodturner living in Fodderty, acquired a beam from the site and proceeded to convert the wood into souvenirs of the Picture House. One of these, a candle holder, is shown at the right. 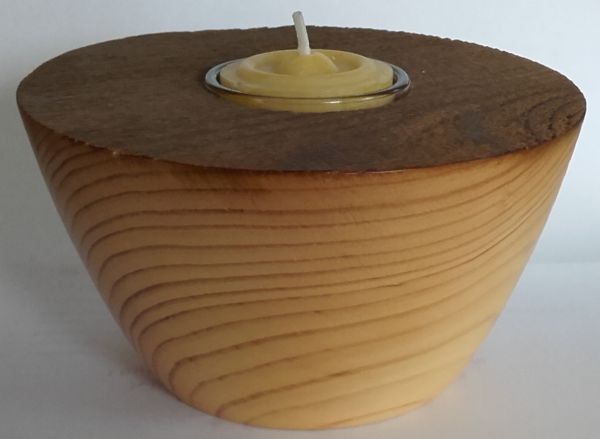 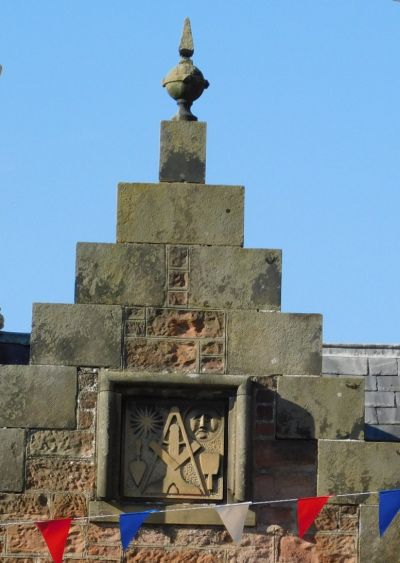 An enlargement of the Masonic plaque before restoration. 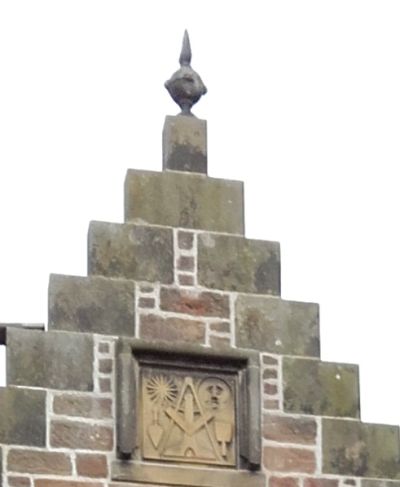 In close detail the origins of the Masonic Hall are revealed, with finial above. 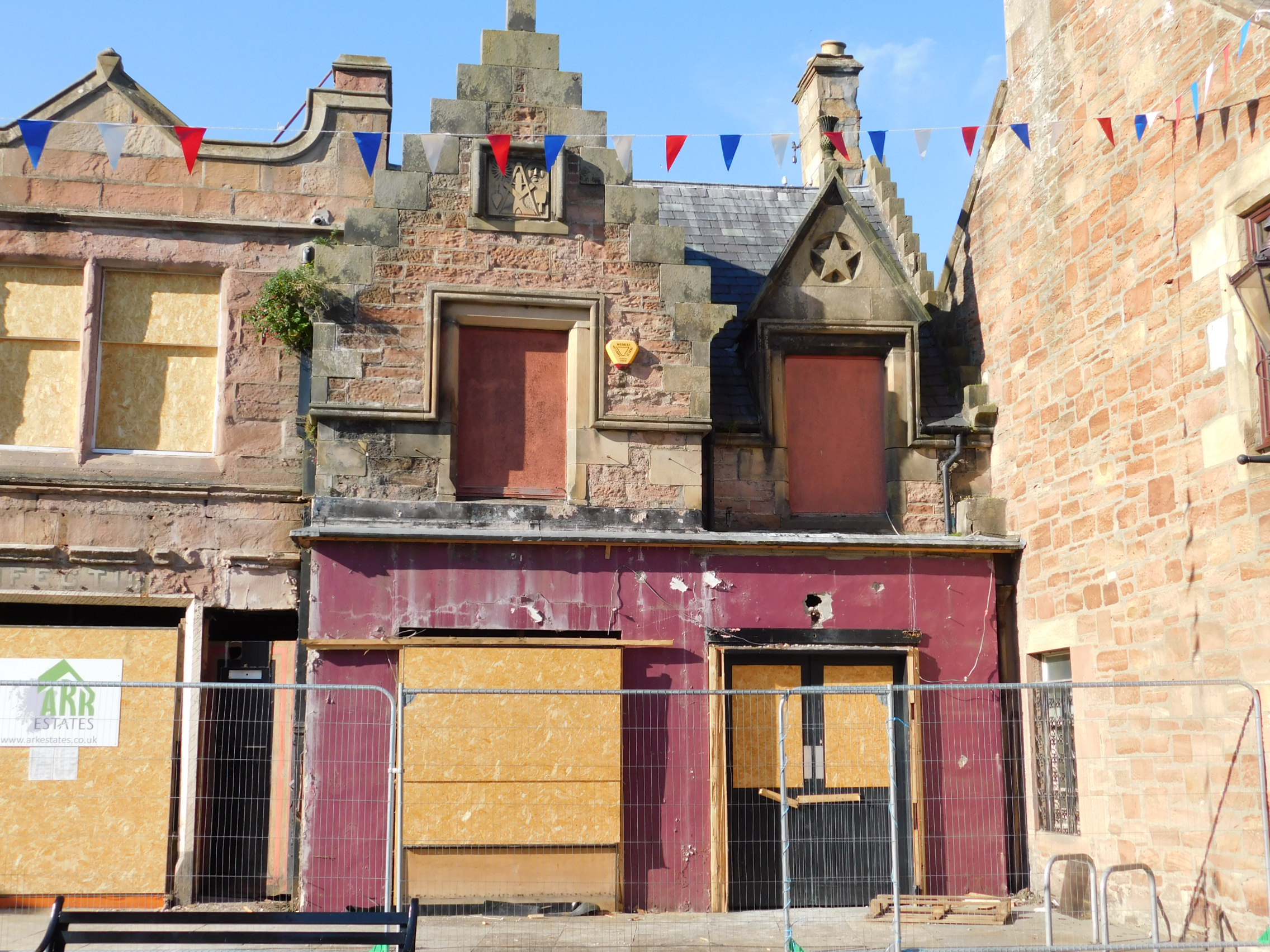 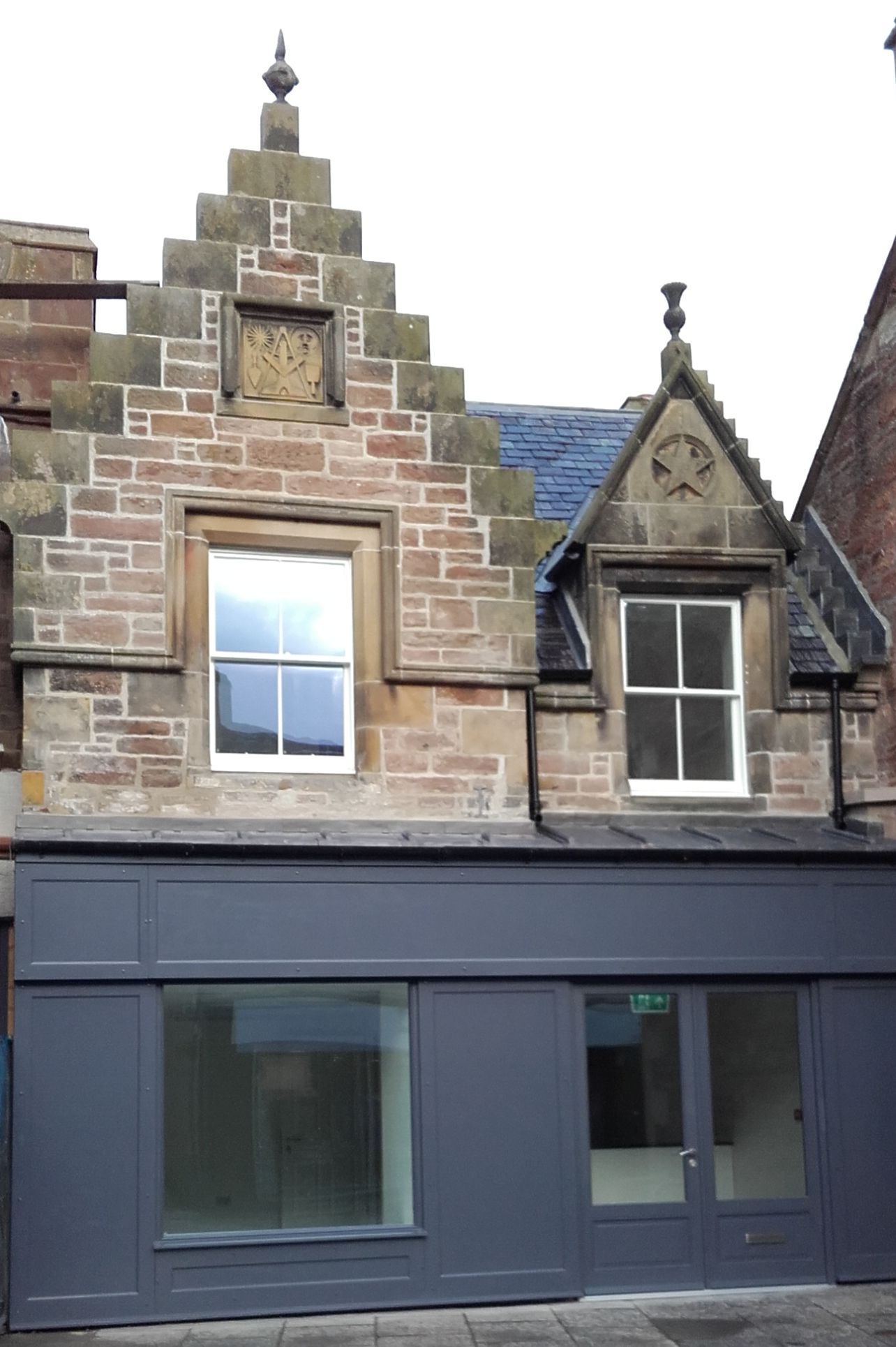