This website contains both general and particular information regarding the genealogy of the Folk of Ross and Cromarty. General information about life in Ross and Cromarty in the 1790’s and the 1840’s can be found via the topic ‘Previous Accounts’ in the ‘Heritage’ Category of each Community. Likewise, the ‘Place Names’ topic in the ‘Heritage’ Category will also shed useful information re the origins and meanings of the place names throughout Ross-shire.

Particular information, about an individual, can also sometimes be obtained via the above. However, the most common reference to individuals will generally be found in the ‘War Records’ topic in ‘Pan Ross’ (click on History, Records).

Below is a map of the Communities of Ross and Cromarty in the year 2000, and using it, we have tried to give you some idea about the chief lands of some of the more prominent clans as held by them prior to the 1750s. However, as a study of the ‘War Records’ topics will show, there were many other small clans and septs in Ross-shire, and with the passing of the years, folk have moved generally throughout the Kingdom of Scots and of course beyond their homelands. 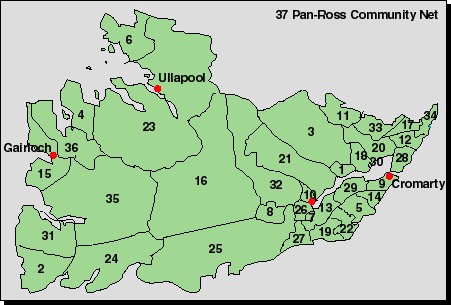 What's in a name?

Read a short history on the most common names and how they came to be.