Lance Corporal John Morrison, 1st Battalion The Black Watch, does not appear in World War 1 extracts in The Ross-shire Journal but, in view of his connection with the County, his story is worthy of inclusion.

In September 2015 a retired GP from Dingwall, Dr Ian Morrison, was contacted by the Ministry of Defence regarding human remains discovered in France and thought to be those of 5181 Lance Corporal John Morrison of the 1st Battalion Black Watch who lost his life in the First World War and who was Dr Morrison’s uncle.

Through the medium of DNA donated by Dr Morrison and his cousin Sheila Thomson, positive identification was made and the MOD proceeded to make arrangements for the burial of Lance Corporal Morrison who, until discovery, had been included among names on the Le Touret Memorial, Pas de Calais, as he had no known grave.

John Morrison’s story is as follows and is courtesy of a press release of The Joint Casualty and Compassionate Centre (JCCC), part of the MOD’s Business Services (DBS) organisation, which provides a focal point for casualty administration, notification and requests for overseas compassionate travel for members of the British Armed Forces. JCCC also answers enquiries relating to individual historic military fatalities and co-ordinates investigations following the discovery of human remains of British services personnel killed in World War 1 and World War 2. 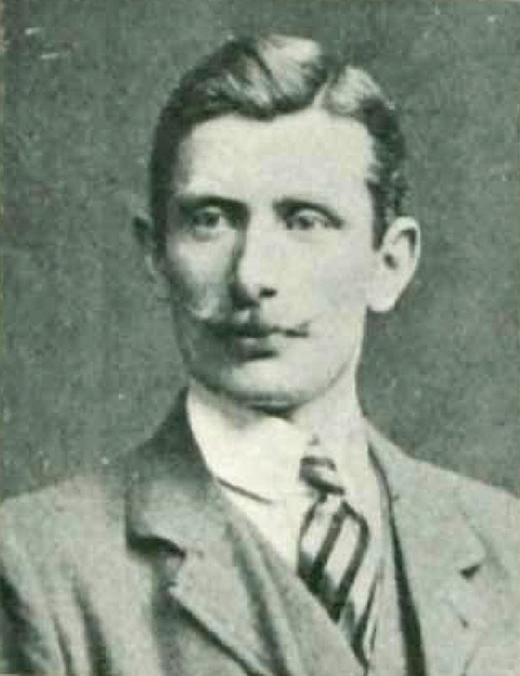 John Morrison was born on 14 November 1885 at Tomintoul. He was 29 years old when killed in action with the 1st Battalion of the Black Watch on 25 January 1915.

John was the fourth of a family of seven children born to his parents, John and Margaret, between the years 1882-1893. His father worked as a gamekeeper who, by the early 1890s, was employed on the Brodie Castle Estate, Forres, where he eventually became the head gamekeeper.

John followed in his father’s footsteps and also became a gamekeeper. At the outbreak of the war, he was employed on the Ardtornish Estate at Morvern, Argyll, but decided to volunteer and travelled to Perth to enlist with the Black Watch on 7 September 1914. After completing less than three months of training, John was sent to Flanders, disembarking on 2 December 1914. He joined the 1st Battalion in the field the following day as one of a draft of 150 men to help rebuild the Battalion as a fighting unit after the huge losses suffered during the First Battle of Ypres that had subsided only ten days or so before.

Just days before Christmas 1914 the Battalion, along with others of the Division, received order to deploy from Ypres to the then southernmost part of the line held by the British Army at Cuinchy to counter an anticipated advance by the enemy. On the morning of 25 January 1915, four enemy mines were donated in the notorious Brickstacks sector of the front and the line held by the Coldstream and Scots Guards was overwhelmed by a concerted attack.

Three companies of John’s Battalion, along with other reinforcements, were thrown into the line in a desperate attempt to stabilise the position. It was during the hours of bitter fighting that ensued that John became one of the 59 fatalities suffered by his Battalion that day.

Following his death, his parents received a letter from one of John’s comrades describing his last moments:

‘The attack was fierce and John got a bullet in the leg. Nevertheless, he crawled to the assistance of his officer, also wounded, and was in the act of helping him to remove his pack when he was fatally shot. He was promoted Lance Corporal only a few days before.’

The officer concerned, 2nd Lieutenant Lewis Willett, elaborated further on the circumstances of John’s death in a separate letter to his brother:

‘Some gallant fellow crawled up to me shortly after I was hit and attempted to assist me off with my pack, but, owing to the nature of my wound, I was unable to turn my neck sufficiently around to see who it was. I heard he was hit, and asked him if it was so. He replied, “Yes, Sir”, and when I inquired later, I received no reply but could just touch his hand by reaching back, and found he was dead. From the sound of his voice I thought it was your brother, who was in my Platoon, and I hoped it wasn’t so, and that I had made a mistake, for he was one of my most valued men ….. His end was a gallant one, and his was a peaceful conclusion to a career which, had he been spared to prolong it, he could have looked back on with the justifiable pride of one who has done his work well.’

Before John’s remains were recovered in 2014, he was commemorated on Le Touret Memorial along with the names of 53 of his other comrades who were also killed in action on the same day but have no known graves. 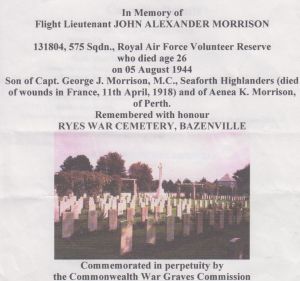 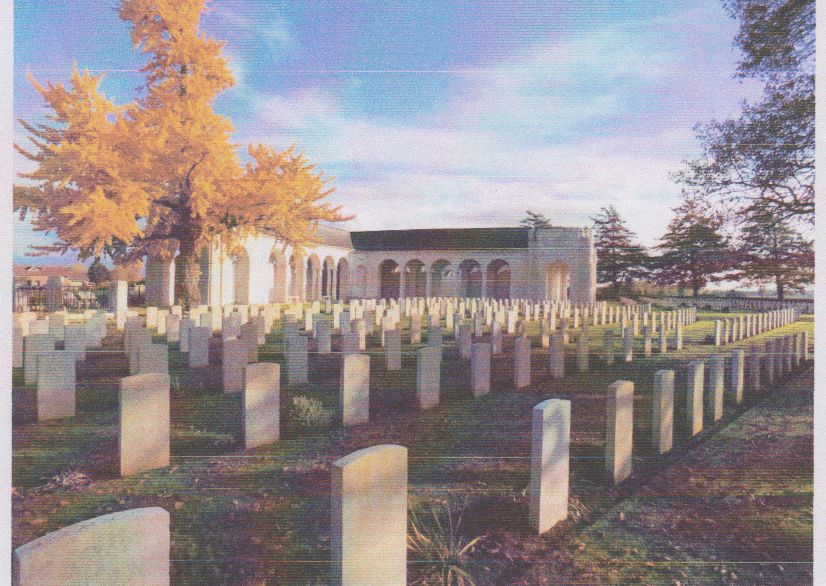 John’s death was not the only tragedy to touch the family. His brother, George, the youngest of the family, died of wounds on 11 April 1918 whilst serving as a Captain with the 1/6th Battalion Seaforth Highlanders. George’s own son, John, born a little more than seven weeks before his father’s death, was also killed in action as a Navigator Flight Lieutenant over Normandy just a month after D Day.

Dr Ian Morrison, the 90 year old nephew of a soldier who died in World War 1, recently paid a poignant visit to Fort George to meet his uncle’s military descendants after the remains of Lance Corporal John Morrison, 1st Battalion Black Watch (Royal Highlanders) were discovered at Cuinchy, near Arras, France. 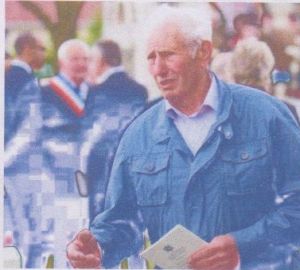 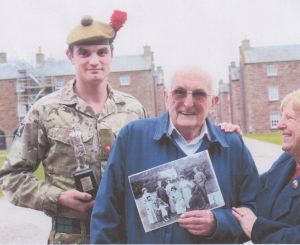 Dr Ian Morrison at Fort George with his cousin Sheila Thomson and Major Martin Stanning of the Black Watch.

Lance Corporal Morrison’s remains were discovered in 2014 together with a spoon engraved with his service number – 5181. This, and insignia found with the remains, led the MOD’s Joint Casualty and Compassionate Centre (JCCC) to trace Dr Morrison and his cousin, Sheila Thomson (age 94), as Lance Corporal Morrison’s nearest living relatives, their DNA having proved to be a positive match with the fallen infrantryman. 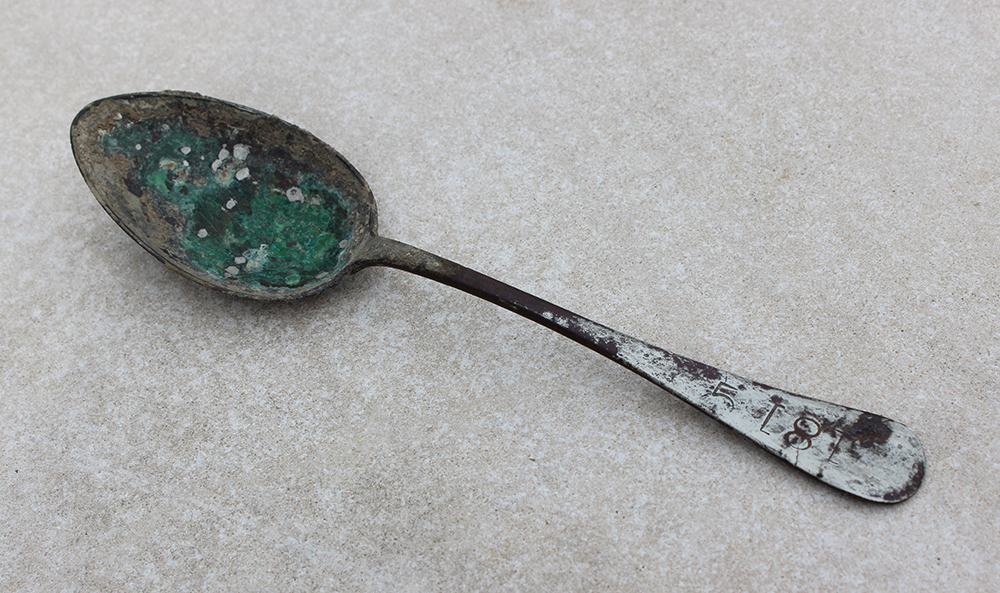 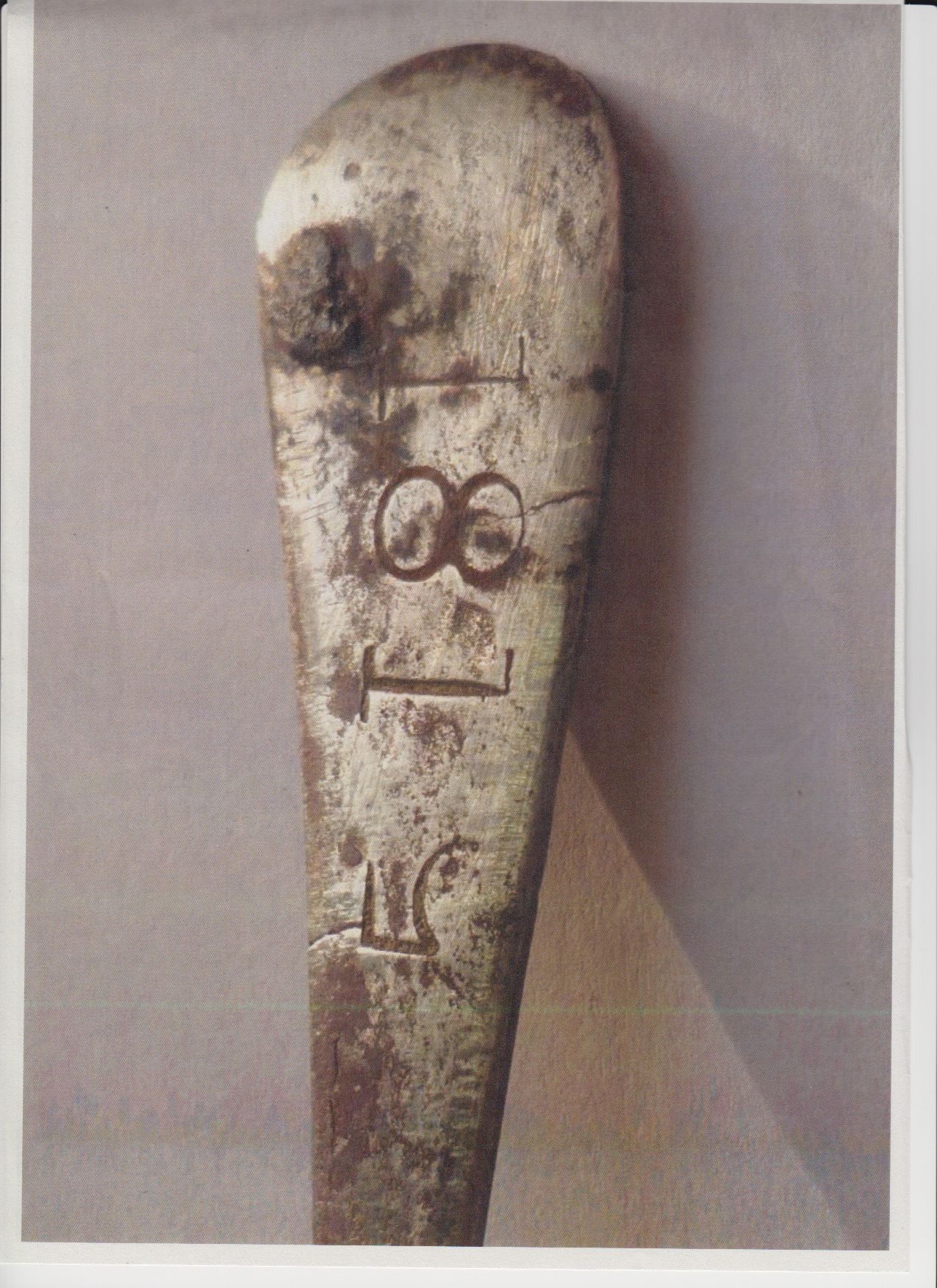 Dr Morrison, who lives near Dingwall, was invited to visit The Black Watch, 3rd Battalion The Royal Regiment of Scotland, to find out more information about his uncle’s Army service.

‘The Royal Regiment of Scotland is immensely proud of its heritage and to be involved in the burial of Lance Corporal Morrison is a huge honour. It was a pleasure for us to host Dr Morrison at Fort George and give him some background on the history of the Battalion.

‘The golden thread that runs right through the Regiment, linking us inextricably with our forefathers, is core to our ethos; activities like this strengthen the bond between past and present. The Scottish soldiers of today share the same fighting spirit and esprit de corps as that of our ancestors, hence we are honoured to assist the Morrison family in burying their uncle, John Morrison.’

Lance Corporal Morrison will be given a full ceremonial burial later this summer with The Black Watch, 3rd Battalion The Royal Regiment of Scotland, providing appropriate support, including soldiers to bear the coffin, fire the salute and play the pipes.

RCHS Note: The ceremonial burial did in fact take place on 27 July 2016 when Dr Ian Morrison was represented by members of his family as, unfortunately, his health prevented attendance. 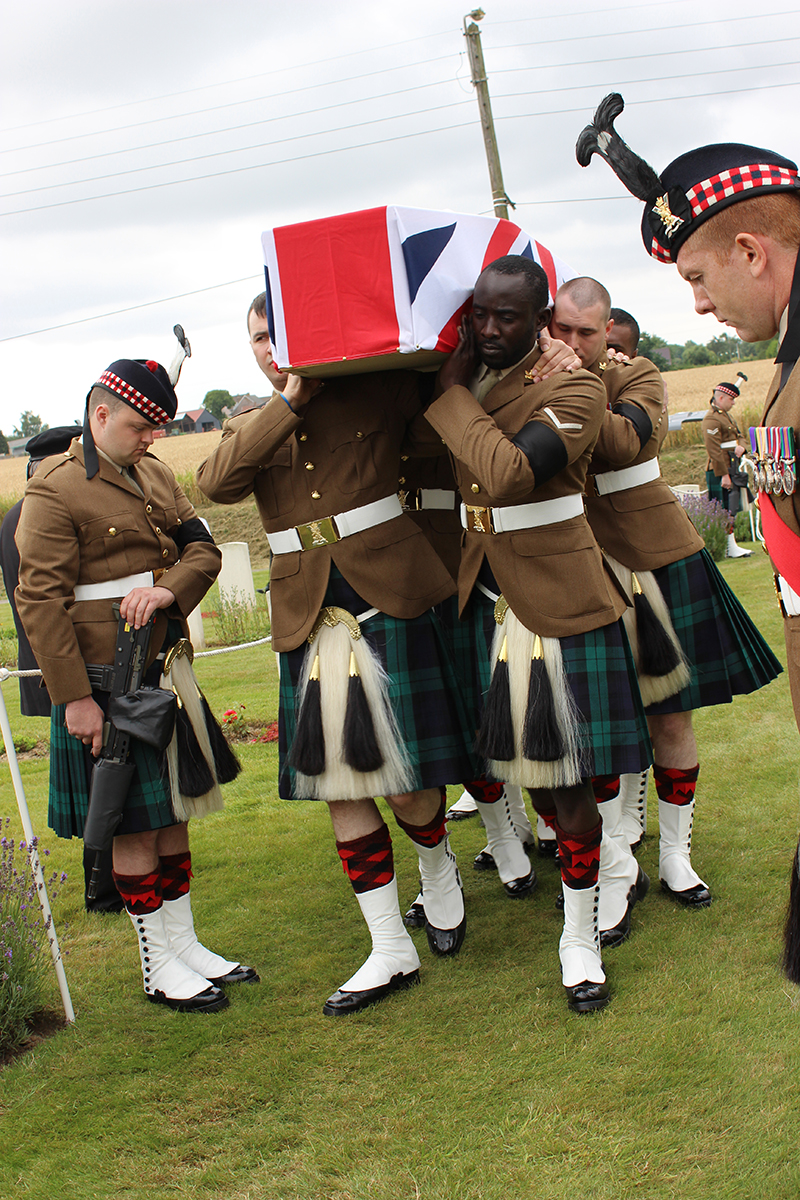 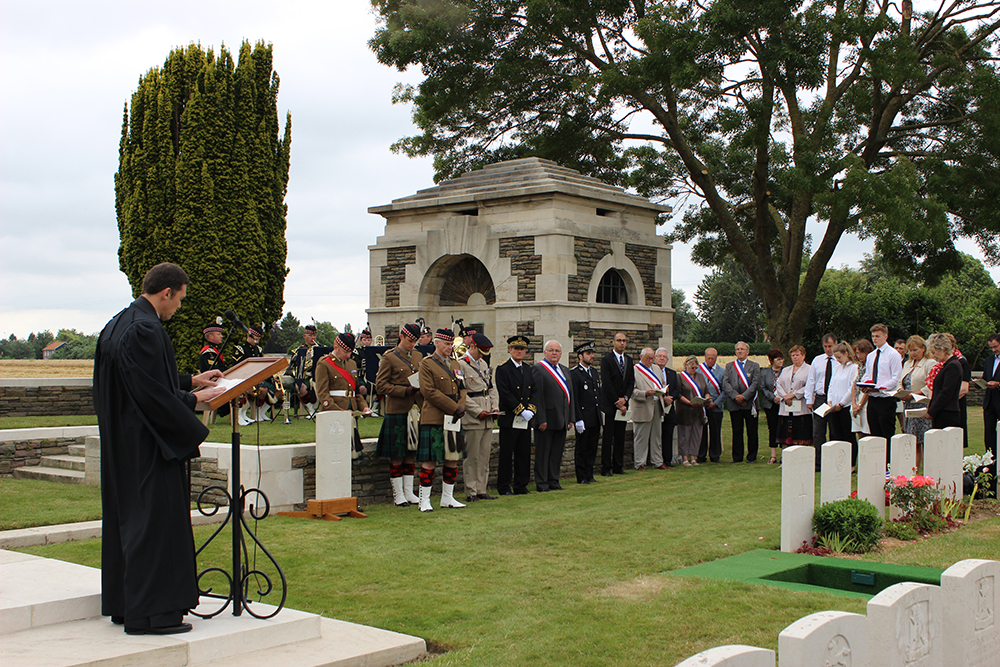 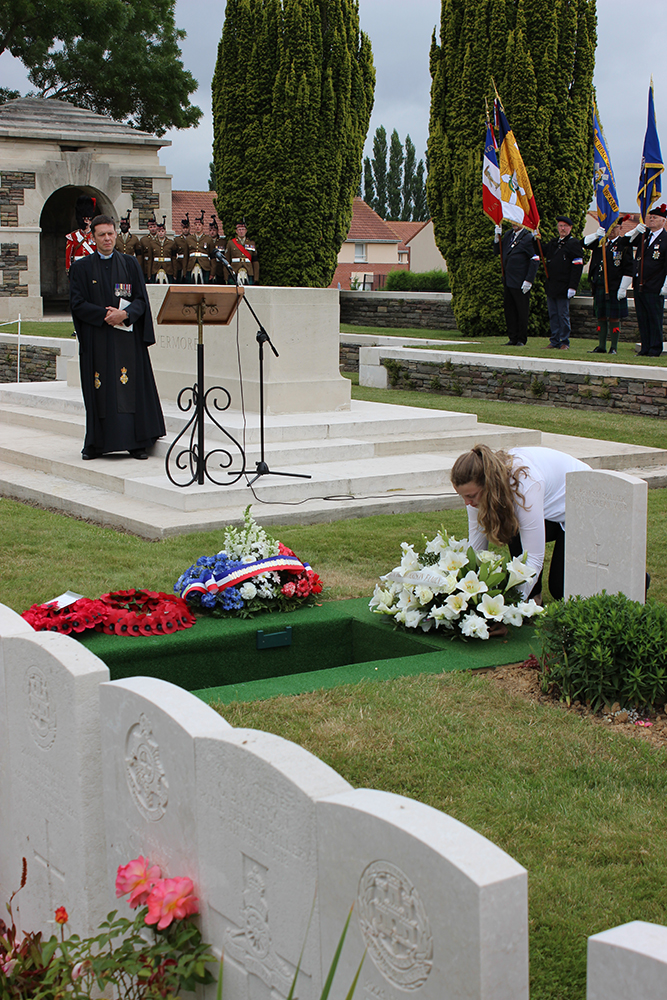 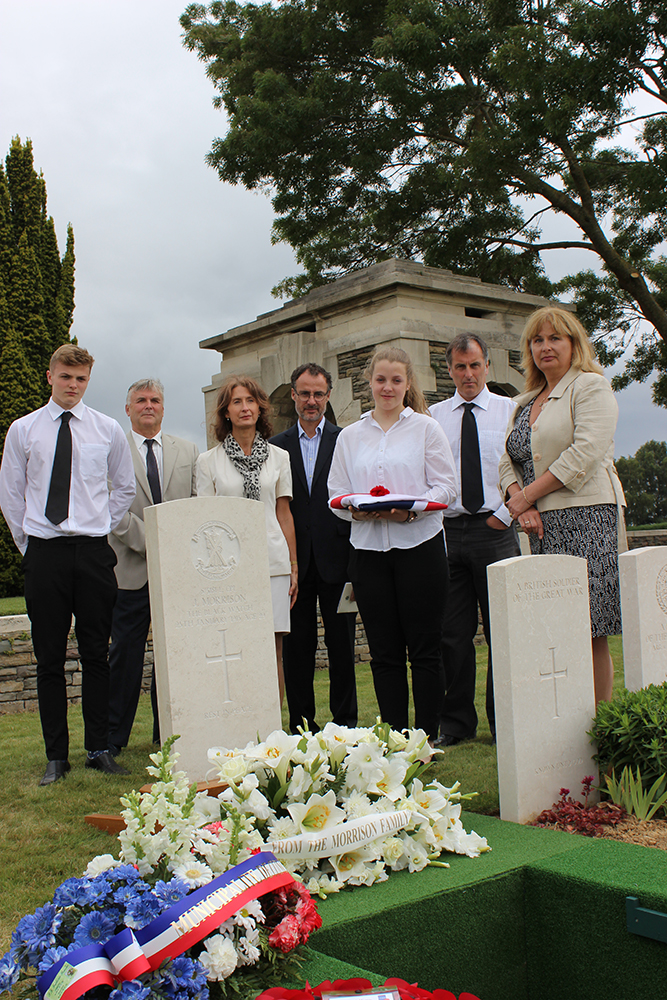