This Memorial presently stands in the Square at the Railway Station in Dingwall. It was originally erected at Nitshill Station, Glasgow and was unveiled there in January 1920 by Lady Lorimer. This seven-foot high rough-hewn slab of granite inscribed and embellished with carvings of a rifle and laurel wreaths was removed from the station to protect it from damage by vandals and re-erected in the station square, Dingwall in 1971.

The inscription on the memorial reads as follows :

In Memory Of Serg’t. John Meikle V.C., M.M. late Clerk at Nitshill Station who enlisted in H.M. Forces (Seaforth Highlanders ) 8th February 1915 during the Great War and was killed in action on 20th July 1918. Erected by his Railway Comrades 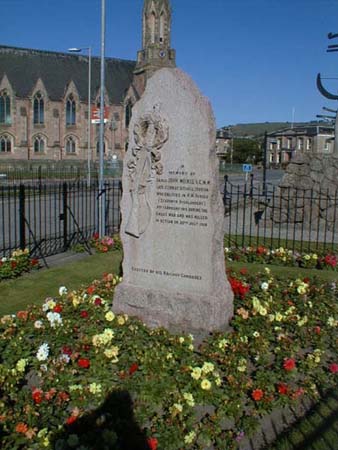 For more details about Sergeant John Meikle V.C., M.M. visit our Dingwall folk page and the article that appeared in the Ross-shire Journal on the 1st November 1918