The Civic Memorial at the National Hotel in Dingwall

The Civic War Memorial is at the front of the National Hotel and opposite the Clydesdale and Royal Banks on High Street. Located at the end of the High Street at map reference  NH 55195 58721  and can be found on Ordnance Survey Explorer Series Sheet 432.

The Memorial was inaugurated on 4th August1923 by Ex-Service Men, including Brig. Gen. Sir Walter Ross of Cromarty, Col. A. F. Mackenzie of Ord, Col. Fraser of Leckmelm, and Col. T. W. Cuthbert who commanded the 4th Seaforths in France.

It is built of sandstone. Graceful curves on the sides of the monument lead on to semicircular walls on each side which are terminated by ornamental terminals. An iron fence surrounds the area which is paved and has floral features. The two 1939 – 1945 panels were added later on.

(Information via copies of the Ross-shire Journal of the time)

Dingwall War Memorial was unveiled by Lord Lieutenant Sir Hector Munro of Foulis, Bart., on the afternoon of Tuesday 20 June 1922.

Through the Press the public had been advised of what was expected of them on the day. It was recommended that all businesses in the town should close between 1.00-4.00pm; ex-Servicemen should muster at the Barracks (a building situated in front of what is now the Council Offices); dress for same should be plain clothes with decorations on left lapel (very precise); accommodation would be provided within the enclosure for near relatives of the fallen and disabled ex-Servicemen; floral tributes had to be placed at the base of the Memorial before 2.00 pm.

The programme for the ceremony was also outlined. Traffic would be diverted via the fountain at Hill Terrace, then via Hill Street and High Street from 2.00 onwards. From the Barracks a procession of ex-Servicemen and some 4th Seaforth Territorials from camp at Nigg, Freemasons, Town Council, Parish Council, Good Templars and Oddfellows would walk via High Street to the site of the Memorial. Schoolchildren would occupy pavement in front of the Memorial.

The ceremony would begin with the Provost introducing Sir Hector who would proceed to the unveiling. Clergy of local churches would participate. Major W S Dewar would read the Roll of the Fallen and a choir would lead psalms. Seaforth pipers from Fort George would play The Lament for the Fallen and buglers from the Fort would sound Last Post and Reveille. Then Sir Hector would hand over the Memorial to the Provost who would accept it on behalf of the Town Council. The ceremony would end with the Benediction and the National Anthem. 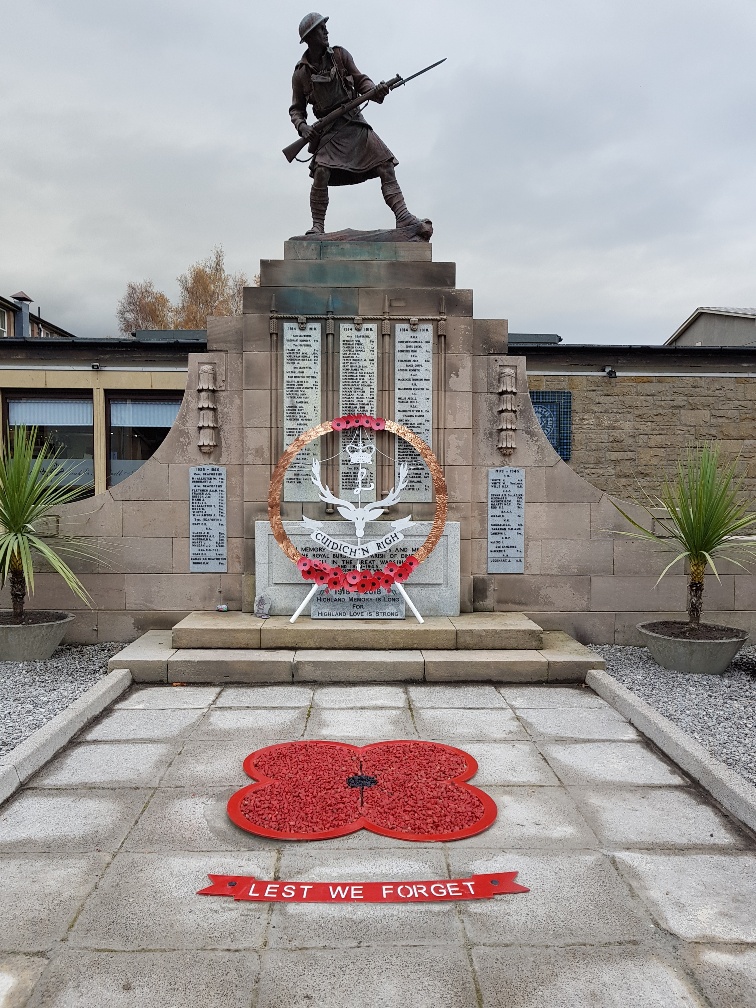 The issue of the Ross-shire Journal of 23 June 1922 devoted four full columns to their report of the occasion, plus a photograph of the Memorial.

On the same date the newspaper reported the unveiling, again by Sir Hector, of a brass tablet memorial to Ross Constabulary comrades who fell in the War. This had been placed on the wall at the main door to the prison entrance at the County Buildings, i.e. adjacent to what was then the Courthouse in Ferry Road. The inscription read: This tablet is erected in memory of members of Ross-shire Constabulary who died for their country in the Great War 1914-18. PC William Macdonald PC Alexander Gordon PC Donald Morrison.

As early as February 1919 the Royal Scottish Academy had formed the Scottish War Memorial Advisory Committee in order to assist local committees who had war memorials under construction. Their intention was to offer suggestions and advice useful to local committees but not to furnish designs, which had to be obtained from professional sources. At this time a considerable number of communities from east to west of the county had held meetings with residents to determine what form their memorials might take. At the beginning of August 1919 names were being gathered for a Roll of Honour in Dingwall Academy, eventually unveiled on 25 May 1922.

On 5 September 1919 Dingwall Parish Church (St Clement’s) aimed to raise £250 for their memorial. This took the form of a stained glass window which was unveiled and dedicated on 20 February 1921. In the same year Dingwall UF Church (Castle Street) embarked on fund-raising for a memorial tablet to members of the congregation who had died in the War. This was unveiled on 5 May 1922.

It was not until 26 September 1919 that a notice appeared in the Ross-shire Journal regarding a public meeting in Dingwall, early in October, to obtain the views of inhabitants about an appropriate form of memorial. An article on 10 October 1919 stated that no decision had been taken at the meeting, although the Rev J R Macpherson stated it was a disgrace nothing had been done earlier. He suggested a Cross in Station Square, bearing names, and, supported by the Chief Constable, a young men’s institute for recreation. However, a committee was appointed to decide on the form of a memorial. A week later, in an article, John Macmillan, described as a painter, proposed a sculptured figure of a Highlander, with another suggesting that the memorial be erected “on the first turn on the road to the (Mitchell Hill) cemetery”. Other recommendations were to improve the Carnegie Institute by making it more comfortable or provide a pavilion in Jubilee Park. Estimate of any favoured project was £1500-£2000. An appeal for subscriptions appeared in the Press and was read in Dingwall churches that week.

During the latter part of 1919 and early in 1920 through the Press and by house-to-house visits the gathering of names for both the Parish Church and Dingwall war memorials was undertaken. Subscriptions gradually increased from the first reported total of £432-12/6 to the final total in January 1921 of £2181-0/1d. Returning to April 1920, this was when it was revealed that the committee had approached J J Joass, a London architect, who as an ex-Dingwallian had offered his services free of charge. By this time the Provost had recommended that the area of ground between the National Hotel and the National Bank be the site for the memorial.

By May 1920 Joass had submitted two designs for the memorial but estimated costs exceeded resources. Adjustments must have been made because Joass wrote in July that the price had come within the limit set. Subscriptions by early September had reached £1969-4/9 and Joass was asked to send designs costing up to £1600. This is the first time the memorial is described as being in granite and with a standing figure of a Highlander in bronze. The sculptor is named as Mr Stevenson of London (at no time was he honoured with a forename!). The committee decided to obtain estimates but not proceed until sufficient funds were available (at that time £2074-6/9). A week later the a model of the Highlander was on display in a Dingwall shop.

In late October 1920 the war memorial committee met to consider definite offers. Total cost would exceed funds available so further subscriptions would be invited. Mid-April 1921 saw an advert inviting contractors to tender for the laying out of the site and erecting an iron railing. 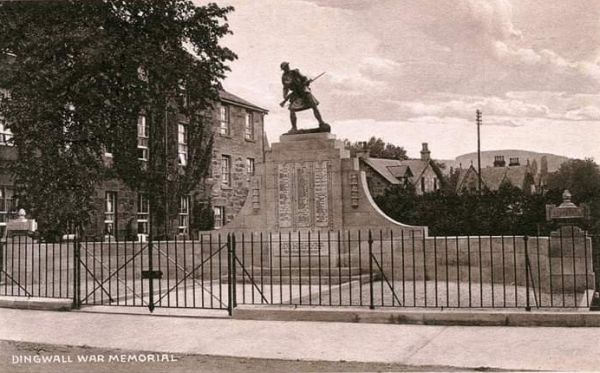 Postcard of Dingwall War Memorial in 1924.

Lists of names of the fallen were published in the Press to enable omissions and corrections to be rectified.

By mid-August 1921 workmen were engaged on clearing the ground for foundations.

Early September 1921 saw the final revision of names. This allowed the committee to agree the inscription and names.

The tape for 1921 finishes at the end of October and there appears to be no information on the actual construction of the memorial, contractor, costs etc., until early June 1922, when details of the unveiling ceremony emerge.

This is an additional note, March 2018 The information in this section is as prepared by Mr John W Bruce some years ago. Since then Mr Bruce has developed a most impressive website - www.rosswarmemorials.org.uk - and while Ross and Cromarty Heritage Society wishes to continue to show Mr Bruce's original work, it is only proper that those seeking information should be directed to his more detailed website.
Click to visit Ross and Cromarty War Memorials 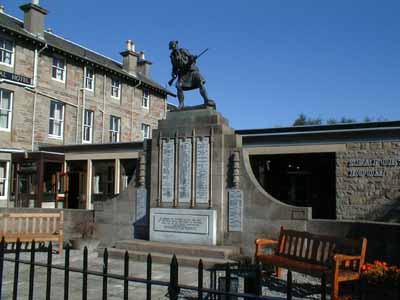