A Short History of Dingwall by Dr. A A Woodham

The importance of Dingwall from early times is attested by its name which is derived from the Norse Thingvollr, meaning the field of the council and the court of justice. Situated near the mouth of the River Conon and at the head of theCromarty Firth, its appearance from the Firth with high ground to either side is reminiscent of Norwegian towns at the head of fiords. The Norse meeting place is thought to have been in the vicinity of Gallows Hill. Even earlier, the prehistoric vitrified hill fort of Knockfarrel, some three miles to the west, along with other settlements on the surrounding higher ground, all testify to the attraction of the location as a centre of population. Dingwall’s own river is the Peffery and its Gaelic name, Inbbir-Pheofharan (Inverfearan) simply means the town at the mouth of the Peffery (cf. Inverness). Dingwall was created a Royal Burgh in 1226 under a charter granted by King Alexander ll. James IV granted a charter of confirmation in 1497and this was ratified by James VI in 1587.

The parish church of Dingwall dedicated to St Clement is situated to the north of the High Street. An earlier church stood some yards to the north of the present building, but only the base of its belfry remains. Adjacent to the belfry foundation is St Clement’s Aisle, originally a chapel attached to the earlier building and containing an inscribed stone recording that this, St Clement’s Chapel, was founded by William Kemp in 1510 A.D. lt is the oldest surviving stone structure within the town and plans are now in hand to consolidate and preserve the ruin. Close to the entrance to the churchyard is a Pictish symbol stone of the earliest, incised type, dating from the 4th-5th Centuries A.D. The present church building dates from 1803 and is unusual in that it faces away from the town centre and looks towards Tulloch Castle to the north. The Castle was the seat of Davidson of Tulloch who owned three quarters of the parish and consequently contributed the greater part of the cost of the new church. He had the plans drawn up and decided that the Church should face his residence. 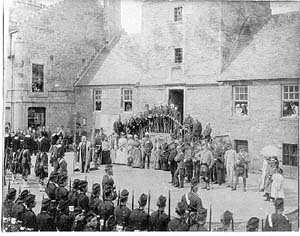 Between the Church and the High Street is a prominent obelisk. This is not of great antiquity but replaces Dingwall’s ‘Leaning Tower’ which was erected over the grave of Sir George MacKenzie, the 1st Earl of Cromartie, in 1714. Dingwall’s marshy sub-soil caused subsidence and the monument developed a tilt, remaining thus until its demolition by the Countess of Cromartie in the early years of the 20th century and replacement by the present obelisk.

On the north side of the Jubilee Park, which was formed to commemorate Queen Victoria’s Jubilee in 1887, runs the Dingwall Canal. The River Peffery was diverted from its original more northerly meandering bed into the Canal when the latter was constructed in 1815-1817 by Thomas Telford. The Canal allowed the passage of sizable ships into the old town centre where the original terminal basin was located at the eastern end of what is now the Victoria Park. The mud and silt deposited by the Peffery necessitated continual costly dredging work and this, coupled with low summer tides which sometimes left only 6 feet depth at high water, began a decline in the use made of the canal. By 1877 it had fallen into disrepair and the increased pressure of the railway competition finally sealed its fate. The original course of the Peffery is preserved in the ‘Old River Road’. The canal is usually referred to thus and remains a prominent landmark in the town, even if not one of its most attractive features.

The antiquity of Dingwall Castle is not in doubt. In Mathew Paris’ 13th century map of Scotland, Castrum Dinkeual is the only castrum or castle in the country marked as such. It figured prominently in Scottish history first as the seat of the powerful Earls of Ross, then held for a time by Edward I of England and during the Jacobite risings of the 18th century the MacKenzies held their councils of war here. It is therefore a matter of great regret that little trace of the castle now exists, nor indeed do we have any reliable indication of its appearance before its ruin and subsequent demolition in 1818. The stones of the castle were used by a Dingwall resident, Captain MacLennan, to construct the present Castle House. 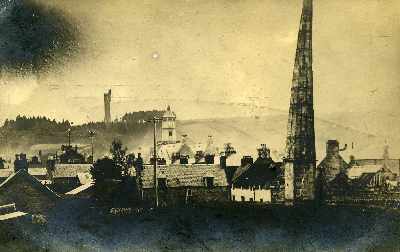 Obelisk marking the grave of 1st Earl of Cromartie (The leaning tower !) 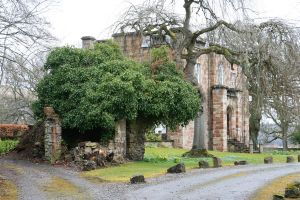 The modern Castle House and (foreground) relics of the original Dingwall Castle.

What was probably originally one of the corner towers of the old castle was transformed into a dove-cot, it is thought by the Bishop of Caithness who was appointed Chamberlain of Ross and ‘Custodier of the Royal Castle of Dingville’ in 1507. The ‘doo-cot’ survives in a ruinous condition in adjacent Castle Street.

On the east side of Castle Street the Printing Works were those of the local paper, the Ross-shire Journal. The building occupied was that of the old Free Church which had been built after the Disruption in 1843 and disposed of when the congregation moved to the fine new building at the eastern end of the High Street The Ross-shire Journal continued to be printed in the old church building until its recent removal to new premises on the Industrial Estate at the west end of Dingwall on Dochcarty Road to the north of the area covered by this sheet. The old building was severely damaged by fire in 1990 but has been converted into attractive flats.

The concentration of buildings around the High Street in 1906 is very marked and reflects its importance as the town centre. Dingwall was, and is, a market town serving a wide geographical area, and practically every building of importance was located in proximity to the Town House where the Council met, and administrative offices and the court house were located . The present Town House was built in 1730, renovated in 1777 and again in 1923. After the reorganisation of local government in 1975 it was no longer required by the District Council and is now administered as an independent Museum by the Dingwall Museum Trust. The Militia Barracks and other buildings at the west end of the High Street were demolished to provide space for a splendid new building to house the Ross & Cromarty District Council. One of the buildings demolished was that used for many years as a hostel to accommodate school pupils with homes on the west coast and in the Islands. This building had been the home of the mother of William Ewart Gladstone, the 19th century Prime Minister. With the provision of new secondary schools in the west children were no longer required to travel to Dingwall Academy, which had since 1939 occupied a new site on the higher ground to the north . Since 1945 the old Academy buildings on the east side of Tulloch Street have been put to a number of uses including housing the Public Library, part of the Community Education department, and St Clement’s school for handicapped children. 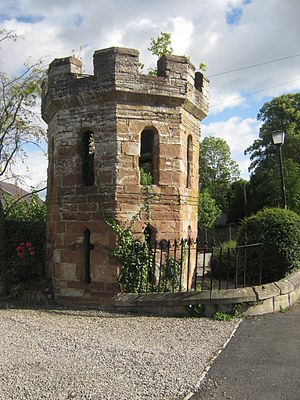 A new ring road has done much to relieve congestion on the High Street. There was considerable controversy in the fifties and sixties regarding the line of this new by-pass but eventually the option of going to the east of the railway line was abandoned in favour of the westerly route and this was completed in the mid-1960s.The new road joins the southern end of Hill Street and after proceeding west for a few hundred metres, swings round to the north crossing the High Street just to the east of the Council Offices. It continues to the north beyond the limit of this sheet, finally swinging east and joining Craig Road. The area between the new road and the south side of the High Street is now occupied by large car parks. At the present time there is no charge for parking here and this coupled with the recent pedestrianisation of the High Street from the junction with the ring road in the west to the junction with Tulloch Street in the east has materially eased the traffic problem in the town.

Dingwall remains an important railway junction where lines to the west (Kyle of Lochalsh) and to the north (Wick) diverge. However there was and is only one road to the east of the railway line – Ferry Road – and the Hospital is still functioning, though the important Maternity Unit has now been closed with the opening of the large modern unit at Raigmore, in Inverness. The new Health Centre is also located beside the Hospital on Ferry Road. The old County Buildings are now utilised as the Community Charge Office and the Sheriff Court; and the Police are now based in a new building at Bridaig to the west of the High Street.

The Ferintosh Distillery near the southern extremity of Dingwall is now defunct. Originally situated at Ferintosh in the Black Isle where the foundations of the old buildings may still be traced, spirits were distilled between 1690 and 1785 and by Government decree were exempt from duty. No such privilege existed when the operations moved into Dingwall. The distillery buildings on the right and left of the road to Maryburgh have been, in recent years, converted into flats, while the storage building adjacent to the railway fell victim to the new Dingwall/Maryburgh road completed in 2002/3.

Mention must be made of the impressive tower which now constitutes Dingwall’s most prominent landmark. Situated in the cemetery on the Greenhill it was erected in 1906 to the memory of General Sir Hector Macdonald. Sir Hector was born the son of a local crofter and rose from the ranks in Queen Victoria’s army. He distinguished himself in South Africa and in the Sudan where the victory at Omdurman is generally attributed to his leadership.