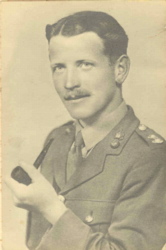 Lieutenant David Cran is reported wounded in Sicily. He is a son of Mr J. R. Cran, Caberfeidh Terrace, Dingwall, and is a banker by profession, having received his training in the Commercial Bank, Dingwall. There are six of Mr Cran’s family serving with the Forces. In addition to Lt. David Cran, these are: Jack in the R.A.F.; Robert and Alistair, and Winnie and Mona.

Lieut. David Cran, Royal Scots Fusiliers, died of wounds while serving with the Mediterranean Force, was a son of Mr J. R. Cran, Caberfeidh Terrace, Dingwall. A banker by profession, he served his apprenticeship in the Dingwall branch of the Commercial Bank. Later he was transferred to London, where he joined the London Scottish, with which he served in Norway. On his return he qualified for a commission and was posted to the Royal Scots Fusiliers. Prior to going East, Lt. Cran was married to a Miss Muriel Bain, whose home address is in Surrey, but who is serving with an Anti Aircraft Motor Transport Coy., in which she holds a commission. Of a very cheerful disposition, his smiling face made him a general favourite. Much sympathy is extended to his wife, and father, sisters and brothers. Jack, Robert and Alistair are serving with the Forces, as also are Winnie and Mona, while Nannie is at home.

Courtesy of Lieut. Cran’s sister, Mrs W. Sinclair, we are able to reproduce his photograph and his last letter home:

“Lt. D. H. Cran, 21 R.S. Fus., C.M.F. 30 Dec. ’43.
“Dear Win,
“My correspondence has suffered a lot this past while. Things have been rather tough and I have been feeling rather out of sorts because of the wretched cold and one thing and another which accompanies active service. I don’t mind the shells and the killing as much as the dread of spending long days and sleepless nights in cold wet trenches. The boys have done wonders of ‘sticking it’ in this unhappy country: may they see some result for it all when the end of the war comes.
“At the moment we are at rest in good billets and have been fortunate in having been able to spend Xmas in comparative comfort. The usual fare was in good supply and considering everything the usual customs were kept in good style. New Year has to come yet and, if we can, we hope to procure some beverages for the celebration. We are, of course, too near the guns to allow any undue frivolity but in a small way we shall, no doubt, toast 1944. What it will bring no one has much doubt. Let us hope some Providence may come about to stop extreme frightfulness.
“Since beginning this letter the snow has come and now all the country is white in about a foot of snow. During the first wild night the conditions were very extreme but now that the sun has come out it is quite pleasant and our spirits have revived.
“The date is now actually the 2 Jan. and all the boisterous mirth of the New Year has passed, thank goodness. The fellows get most horribly drunk on that infernal vino and perhaps you have some idea by now of how Jocks behave when they get boozed up with raw spirit. It is all OK when you are far from the front but it is not to pleasant when Jerry is just across the way.
“I send you my sincere good wishes for the New Year and my wish is that we may see each other again before the year is out.
“Give my love to everybody at home when you go north.
“Yours aye, David

Mrs Sinclair adds that David was killed in Italy and that his name is recorded on both the Dingwall War Memorial and on a plaque in Castle Street Church of Scotland, Dingwall.

Mr A. W. Fraser, Caberfeidh Terrace, Dingwall, has received notice that his son, Gnr. Alister M. Fraser, R.A., A.A., has been wounded in the knee while serving in Northern France. He joined the A.A. battery at Dingwall early in the war.

Captain Patrick Munro of Foulis, and Captain Hector Gascoigne, The Seaforths, have both been reported missing. Sons of the late Lieut. Colonel Cecil Gascoigne, D.S.O., The Seaforths, and of Mrs Gascoigne of Ardullie, and grandsons of the late Colonel Sir Hector Munro of Foulis, Bart., and of Lady Munro of Foulis, both were serving in the 51st Division and are believed to be prisoners of war. Capt. Patrick Munro, it will be recalled, succeeded to the estate of Foulis on the death of his grandfather, taking the old family name. He is Chief of Clan Munro (Association). The attachements of the House of Foulis with The Seaforths, direct and indirect, have been long and intimate. The heir to the title, Captain Hector Munro, yr. of Foulis, fell in the last war shortly before the Armistice while serving with The Seaforth Highlanders.

Pte. John George Cormack Gunn, The Seaforths, killed in action, was the third son of Mr and Mrs William Gunn, Humberston, Dingwall, and formerly of Strath of Watten Caithness. Thirty-one years of age and a farm servant, deceased was in the Caithness Seaforth Territorials before war broke out. He went through the North African campaign with the 51st Division and after the occupation of Sicily returned to Britain and later took part in the invasion of Normandy. In a letter of sympathy to the deceased’s parents, his officer writes: “I have been John’s Platoon Commander for over a year, in which time I learned to respect and admire him as a fine, steady and dependable soldier. His loss was a great blow to all in the Battalion who knew him, and he is sadly missed by his comrades, amongst whom he was universally popular.”

Private William George Innes, The Seaforths, wounded in Normandy, is a son of Mr and Mrs Innes, Drynie Farm, Dingwall, and a grandson of Mrs Pirie, The Lodge, Newmore, Invergordon. Pte. Innes, who is 22 years of age, is in hospital in England. He was wounded in the foot and above the knee in the same leg.

A.B. James Lockhart, M.A., Royal Navy, killed in action in February 1944, was principal classical master in the Dingwall Academy. A former pupil of Dunfermline High School, which he attended while his father was stationmaster at Halbeath, he graduated M.A. with first-class honours in classics at Edinburgh University. His first teaching appointment was as assistant classical master at Wick Academy. In 1927 he came to Dingwall Academy. About a year ago he joined the Navy, in which he was proud to serve as an A.B. Last Christmas he was on leave, which he spent among his friends in Dingwall. A keen rugby enthusiast, he was for several seasons an invaluable member of the Ross-Sutherland Rugby Club. As a teacher he was most painstaking and thorough and his success was shown by the number of pupils he guided through the Leaving Certificate examinations. Extremely popular with his pupils, he will be missed by many, now scattered in all parts of the world. About 40 years of age, he was unmarried.

See entry below for details of his brother Tom Macallister

See entry above for details of his brother James Macallister 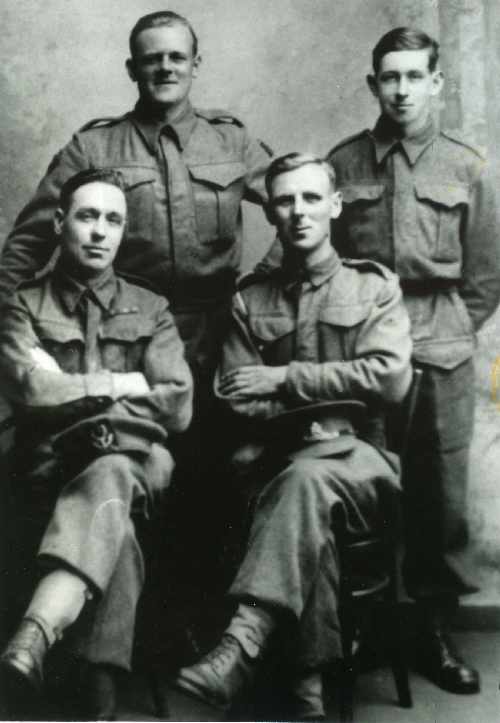 “Corporal Tom Macallister, The Seaforths, was killed in action on the Burma Front in June. He was a son of the late Mr and Mrs Lindsay Macallister, Dingwall, and his young wife resides at Camore, Dornoch. Twenty-five years of age, he was labouring in Dingwall when he joined The Seaforths at the outbreak of the War. The Macallister family, who have intimate family connections with Ross-shire, have a remarkable war record, both in this campaign and in the 1914-18 struggle. An uncle of Corporal Macallister, Peter Macallister, was a well-known member in the old 1/4th Battalion Seaforths in the last war.”

Nephew of Tom and James Macallister, see entries above

Pte William Macbain, The Seaforths, son of Mr John Macbain, Meiklefield Square, Dingwall, who is a prisoner of war and stationed at Stalag XXI D, writes that he is out in the sun working at the potato pits. He adds, “We have had a bit of bad luck. The Germans found the camp wireless set, after we had had it for two years. Never mind, we know everything and we feel sure that this coming Christmas will be our last here.”

Intimation has been received by Mrs J. McCusker, daughter of Mrs Finlayson, Peffery Road, Dingwall, that her husband has been wounded in Normandy, and is now lying in hospital in England. Before joining up, Cpl. McCusker, Royal Corps of Signals, was employed by Messrs McRae & Son, the Garage, Dingwall.

Pilot Officer Iain Alasdair Macdonald, R.C.A.F., posted missing, is a son of Mr and Mrs Alexander Macdonald, Courtney, B.C., and a grandson of the late Mr Wm. Macdonald, carpenter contractor, and of Mrs Macdonald, Vulcan Cottage, Dingwall. Pilot Officer Macdonald was commissioned last October after a series of outstanding successes with the R.C.A.F. Schools through which he passed, being an honours student. Prior to joining up he was at University in B.C. studying Applied Science.

Battery Sergeant Major James Mackay, R.A., died of wounds as a result of injuries received while serving in Germany, on 20th March, 1945, was a son of Mr and Mrs Simon Mackay, Blackwells Street, Dingwall, and husband of Mrs Mackay, 7 Fingal Road, Dingwall, a daughter of Mr and Mrs Colin Campbell, Temperance Cafe, Tulloch Street, Dingwall. Prior to enlisting, B.S.M. Mackay was employed with Messrs R. Mackenzie & Sons, plumber contractors, Dingwall. He joined the Anti Aircraft unit prior to the war and was called up immediately hostilities broke out. He served in the North African campaign before going to the Western front. In his younger days he was a keen Scout and also a member of the Dingwall Fire Brigade. Many will regret his death, and sympathy goes out to his wife and three young daughters and also to his parents.

Do you have any more information about the people on this page.

Your comments are welcome

This website uses cookies to improve your experience while you navigate through the website. Out of these, the cookies that are categorized as necessary are stored on your browser as they are essential for the working of basic functionalities of the website. We also use third-party cookies that help us analyze and understand how you use this website. These cookies will be stored in your browser only with your consent. You also have the option to opt-out of these cookies. But opting out of some of these cookies may affect your browsing experience.
Necessary Always Enabled

Any cookies that may not be particularly necessary for the website to function and is used specifically to collect user personal data via analytics, ads, other embedded contents are termed as non-necessary cookies. It is mandatory to procure user consent prior to running these cookies on your website.