A River with many bridges

Over the years there have been several bridges crossing between Maryburgh and Conon Bridge.  These have ranged from a bridge by Thomas Telford to a metal bridge containing utility pipes. 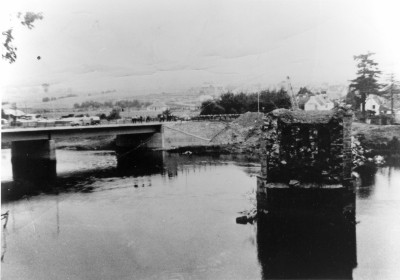 History of the Railway Bridge

RCHS is grateful to the Editor of the Ross-shire Journal for permission to reproduce the article which appeared in the edition of 8 June 2012 to mark the 150th anniversary of the opening of that section of the Highland Railway.

In January 1859 Alexander Matheson convened a meeting of interested parties to discuss the building of a railway from Inverness to Dingwall. Matheson was a director of Jardine Matheson which traded between India and China.

He and his uncle James, one of the founders, both made fortunes and were able to purchase Highland estates. Alexander owned Ardross, near Alness.

After Queen Victoria and Prince Albert purchased Balmoral, the Scottish Highlands became a popular tourist destination. The landed gentry liked to travel each summer for their Scottish estates along with their retinue, so good communications were essential for them as well as for the local population who were able to benefit from the employment provided.

The indigenous landowners were also keen on the railway as they realised this was an opportunity for them to develop the resources of their estates for export such as wood, fish, grain and whisky.

The Dingwall Town Council was very enthusiastic about a railway. Its citizens had either to walk or ride on horseback to Inverness or rely on the stagecoach. From there, they were able to get a train to Aberdeen and travel further south if they wished.

The directors asked Joseph Mitchell, the engineer for the railway eastwards along the coast to Keith, to carry out a survey. He and his assistants, William and Murdoch Paterson 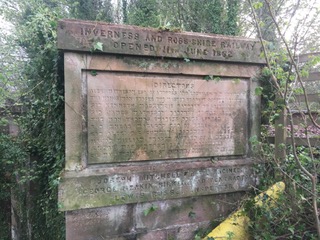 The plaque on the Maryburgh side of the rail bridge commemorates the opening of the Inverness and Ross-shire Railway on 11 June 1862. It lists the directors of the company, the civil engineer and the contractor.

View more photographs of the Bridges over the River conon