Angus Christie was named by villagers as ‘Mr Maryburgh’ since, as a long-term resident, he energetically pursued whatever was required to keep the community a vibrant force. No task was too menial, whether it was watering flower tubs and baskets during the summer or presiding over the candyfloss stall at the annual Gala. His practical skills were phenomenal and he could turn his hand to constructing whatever was required, sourcing material from an amazing collection of “things” that might become useful at some time.

Following the closure of Maryburgh Primary School in 2012, against which Angus fought valiantly, he organised a two-day exhibition featuring the school’s history from 1864 to its final day. For this the “things” were transformed into display cases or display boards. Not content with this, Angus cajoled various people into contributing towards The School, a small book covering the history of the school from its origins to its closure, including a photographic history, and, as ever with an eye to limiting printing costs, sourced the most economical method of production.

But it is his role as Chairman of Ross and Cromarty Heritage Society that this organisation remembers him.

Angus took over the chairmanship in 2005 and continued as such until illness intervened in 2016. The office at that time (2005) was rented, the cost of which was draining the society’s slender financial resources, so Angus moved everything into a room in his home where RCHS continued to function for two years. This intrusion could not continue indefinitely and, again, Angus rose to the challenge. Not only did he secure grant aid for RCHS for the project but, with similar input from Maryburgh Amenities Association and Maryburgh Community Council, purchased a portacabin from which the three organisations could operate. Needless to say, fitting out the cabin was done by Angus, inevitably using those “things” !

A new base deserved updated computer equipment and this was achieved by pursuing another grant. Time moved on and opinion was that the website was dated and a more appropriate one should be considered. Once more his vision came into play until, after many frustrations and a great deal of effort on his part, Angus could see the finishing line appearing when, sadly, he had the stroke which took away the drive, determination and community spirit which had dominated his life for so many years.

The first and foremost memory of Angus Christie which remains for members of RCHS is not of the practical issues with which he dealt so efficiently but of the lovely, warm nature of the man we admired. His contribution to life, to the community of Maryburgh and beyond was outstanding. 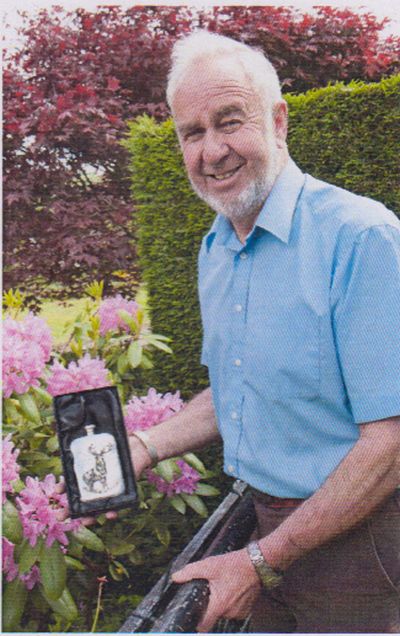 Angus with the engraved hip flask which he received from the community of Maryburgh in appreciation of his work in establishing a hall and organising other annual events in the village over a period of 42 years.

Angus Christie came to Maryburgh in 1970, soon after the smelter opened in Invergordon, at a time when the village consisted of Hood Street, Proby Street and Seaforth Place.

By then, the old Seaforth Drill Hall had been sold and the village had no community facilities. The Maryburgh Amenities Association (MAA) had also at that time campaigned successfully to save the village school which, although in poor condition, had an excellent reputation.

Angus joined MAA in 1971 and during his involvement instigated and participated in many events and activities, including the Gala of 1975, with raft races on the Conon river, cart races in Hood Street and a decorated float parade. He was a member of the group established to run the swimming club in 1974 and participated with MAA to establish Maryburgh Community Council (MCC) in 1975. 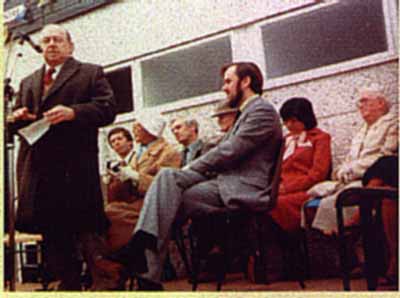 As convener of MCC sub-committee he was instrumental in progressing the building of Maryburgh Amenities Centre, completed in 1981. Also in that year he instigated the Flower and Garden competition and helped see the start of the annual Santa Sleigh event.

He retired as treasurer of MAA after 14 years but rejoined in 1996 after the amenities flat roof failed, and set about managing the repair and upgrade project at a cost in excess of £30,000.

The original specification for the building was intended to provide an interim facility until a new school was built in Maryburgh. The centre reopened in December 1998.

In 2000 Angus organised the Maryburgh Heritage Exhibition as part of the Millennium celebrations, held over three days at the amenities centre.

A member of MCC from 2005, he was elected chairman in 2008. During this time he campaigned tirelessly to retain the primary school in the village.

In 2012, when presenting Angus with his gift at the Jubilee Garden Party, MCC member Jenny Maclennan said:

“For every knockback he had a bounceback and carried on stronger than ever. He was inspirational to those who kept the fight going for the school and it is very pleasing that, despite the huge disappointment he and the community suffered of losing the heart of the village, he is still involved with both MAA and MCC. Not to mention manning the candy floss stall every year at the Gala!

“In summary, the community of Maryburgh would like to raise a glass to Angus Stewart Christie, to his determination and resourcefulness and to his wife, Betty, for putting up with his many absences on community business.”

An honest man here lies at rest
As e’er God with His image blest:
The friend of man, the friend of truth;
The friend of age, and guide of youth:
Few hearts like his, with virtue warm’d,
Few heads with knowledge so inform’d.
If there’s another world, he lives in bliss;
If there is none, he made the best of this.
– Robert Burns

This verse was included in the intimation sheet issued at the celebration of the life of Angus Christie and sums up the man who was loved and respected by so many.