The founding of the village of Maryburgh is of comparatively recent origin. MARYBURGH as we know it dates from 1815 when Mary Elizabeth MacKenzie returned to Brahan Estate on the death of her father.

One of the oldest cottages in the village, presently called “Peartree Cottage” at the top of Hood Street has the date 1824 inscribed on the “skewputt” (the lowest stone on the coping). This cottage and the others occupying the same side of Hood Street all had thatch roofs. 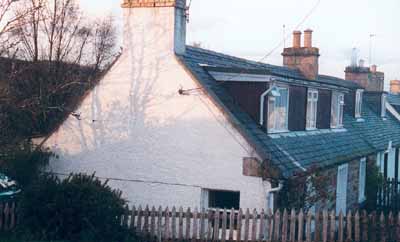 Peartree Cottage, built in 1824, the oldest house in the village.

The village was created to house Brahan Estate workers, many of whom were displaced crofters from the Highland Clearances, notably from Strathconon. Proby Street, the second street of the original village was then, as now, the main thoroughfare from Dingwall to Conon Bridge but was also part of the main North Road from Inverness to Wick. The original bridge over the river was opened in 1809 prior to which the river was crossed only by a ford and the “Skuddell Ferry” which operated throughout the 1600s and 1700s.

The houses on the South side of Proby Street also contained estate workers, each of whom had been allocated a narrow strip of land, approximating to one acre, which extended down to the river Conon. These rigs of cultivated land were known as the “Maryburgh Acres”.

One of the many fine houses along Proby Street, “Sunny Holm”, is dated 1828. One hundred years ago this was the home (and business) of The Flesher (the butcher) now the home of a surrealistic artist and family.

In 1841 the population of Maryburgh numbered 403 rising to 503 in 1851. By 1870 the community had developed to 45 houses. By 1885, Ordnance Survey records state that Maryburgh was a modern place inhabited chiefly by crofters and tradesmen and had the benefit of a Post Office, a Free Church, an Inn, a Public School, Brick and Tile Works, Carden Mill, Corn and Meal Mills, and a Lint and Snuff Mill.

MARYBURGH remained static for many years until in the post-War period with the development of the Hydro Schemes, the Invergordon Smelter and the Oil Industry major expansion occurred.

The extract above is taken from Issue No. 68 of Maryburgh Roundabout by kind permission of the author, Angus S Christie.