Roddie Campbell, who died aged 94, was the oldest and one of the last remaining handful of Highlanders who fought for the Lovat Scouts in World War II.

Born on the Ross-shire croft that has been in his family for at least seven generations, the privations of rural life in the 1920s prepared him well for the feats of endurance he would face during the Second World War. Together with his tracking and stalking skills as a gamekeeper, his were the perfect credentials for the Scots and their daring recce missions.

Although he survived the war, Roddie came home with more than he bargained for – numerous pieces of shrapnel, embedded as a result of a mine blast, but which failed to prevent him volunteering heroically to rescue friends lying wounded in the minefield.

Born and raised in Tollie of Brahan at Lochussie, he was one of nine children of carter Donald Campbell and his wife Mary. Like many in their circumstances after the First World War, he experienced poverty, knowing what it was like to go hungry and walk barefoot to school.

Educated at Maryburgh School, he left at age 14 to work as a trainee gamekeeper on the Brahan Estate before moving to Nairnside, just outside Inverness. By the time the Lovat Scouts were re-formed at the outbreak of the Second World War, he was an experienced stalker and keeper.

Dating back to the turn of the last century, when Lord Lovat was allowed to raise his own contingent of Highlanders, renowned as sharpshooters and unrivalled intelligence-gatherers, there was no question that joining the Scouts was what Roddie wanted to do.

The last horse reconnaissance troop in the British Army, they were mobilised to provide mounted scouts for reconnaissance and close protection. Initially billeted in Strathpeffer, they later headed south before being sent to the Faroe Islands in May 1940 after the Germans invaded Norway and Denmark. There they were attacked by the Luftwaffe but managed to strike back, armed only with Bren guns for most of the time, utilising one to shoot down a Heinkel III bomber whose crew were convinced they had been hit by flack. 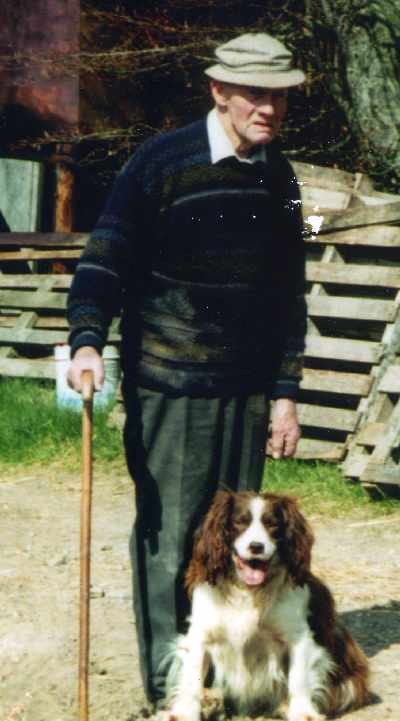 Roddie spent two years in the Faroes and thoroughly enjoyed his time on the islands, swimming daily in winter and summer, and remembered the population as the nicest people he ever met. Returning to Scotland in 1942, the Scouts guarded the Royal Family at Balmoral and began training as a mountain reconnaissance regiment, for the 52nd Lowland Division, on the peaks of Scotland and Wales. Decades later he confessed that Balmoral was the only place where he had ever committed a crime. Unable to dance, he had refused to attend the annual ghillies’ ball and got six days confined to barracks.

In December 1943 the Scouts left for Canada, training in Jasper, Alberta, in the heart of the Rockies. Roddie had wonderful experiences there, learning to ski, going out on patrols, sleeping in snow holes and claiming he never felt the cold, even on 12-day treks when their food was dropped to them and the hottest thing they got was a cup of tea. There was one slight hiccup, though nothing to do with the war. After one of the 12-day expeditions he came down with appendicitis. Following a trip to hospital to have the appendix removed, he was back on his skis a fortnight later.

Two of his sisters later married Canadians and while he was still in Jasper he rode out to the ranch of one of his future brothers-in-law, in Lillooet, British Columbia, to check where his sister would be living.

By July 1944, the Scouts were in Naples, Italy, moving north and seeing action in the Appenine Mountains. Roddie recalled Italy as “a horrible place” with a “terrible streak between Naples and Rome” and described how the unit would be battered for two or three days and then things would go quiet, allowing them to move on to hunt out the enemy. “You had to watch for the mines,” he said, “and that’s when we were scarred, just at the end, with the mines.”

The patrol was pushing north and had been unaware it was treading on a minefield outside Florence until one of their company was blown up in front of Roddie. When the call went up for others to help rescue wounded colleagues, he volunteered. More mines exploded during the mission, badly injuring Roddie. All of the fingers on one hand were broken and he took a lot of shrapnel. Many years later he was operated on back home to remove some of the fragments, but one piece lay too dangerously close to his spine and remained there for the rest of his life.

After being demobbed, he returned to Nairnside for a while, later making a good living as a rabbit trapper in the Black Isle before myxomatosis put paid to that. In 1951 he married Mary, whom he had met through her brother, and they began life on the croft. He worked on hydro-electric schemes at Glascarnoch and on the Loch Luichart dam near Strathconon. Other jobs included working for the Department of Agriculture and Fisheries, counting migrating salmon, and in a fish factory at Conon Bridge, processing mackerel, from which he retired at 65.

A country man through and through, he always enjoyed being outdoors, whether it was ferreting or teaching his grandchildren to shoot. Having played shinty in his youth for the Brahan Shinty Club, he also kept an eye on what was happening with the Caberfeidh team. Unquestionably devoted to his own family, his most enduring bond was with his fellow Lovat Scouts, with whom he shared a unique and illustrious history and was regularly reunited.

He is survived by his wife Mary, their son Colin and his wife Edna, three grandchildren, a great-granddaughter and his sisters, Anne, Edith and Jenny.