The Oure Burn, now running under the road bridge at the north east end of the village formed the march between Brekanord on what is now the Kildun side of the road with Balblair to the south west as far as the river crossing at Conon. On a map dated 1832 a ford is shown running diagonally across the river between what are now the sites of the road and railway bridges and a ferry across the quieter and deeper water upstream. This ferry was known as the Scuddell Ferry and is believed to derive from the Gaelic “Sgudale” meaning offal. As far back as 1637 this ferry was the subject of contention between neighbouring proprietors as to its ownership and rights in the collection of fares. The icehouse in the vicinity of the ford, and until recently near the old road bridge, would appear to confirm that fish gutting took place near the crossing and travellers were subjected to the offensive smell of such operations. History seems to repeat itself with modern fish-processing which took place on the Conon side. These crossings were eliminated by the opening of the road bridge constructed by THOMAS TELFORD in 1809. 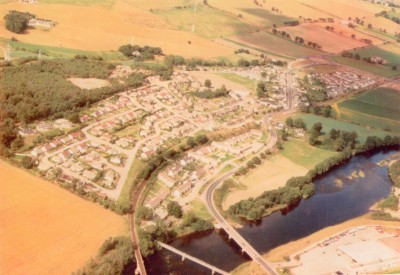