Almost three thousand years separate us from the people who built Knockfarrel Fort; another two thousand years separates those people from the people who built the Chambered Cairns and Burnt Mounds, whose remains you see dotted around Lochussie today.
From around 4000 BC people began to build permanent houses and burial places. The extent to which these survive above ground depends on the materials used to build them. Stone, if left untouched will survive indefinitely.

However, evidence from across Scotland shows a sudden abandoning of many upland settlements shortly after 1200 BC (a massive eruption of the Icelandic volcano Hecla in 1159 BC may have precipitated these changes). Cooler and wetter weather led to tree loss and shorter growing seasons. Peat formed and it became impossible to farm many upland areas. As a result of these changes society became more warlike with groups fighting for the best land or defending the land they already had. Around this time Celtic tribes, probably from Northern Europe, appear to have settled in Northern and Eastern Scotland either peacefully or by invasion. Knockfarrel Fort was built around this time. 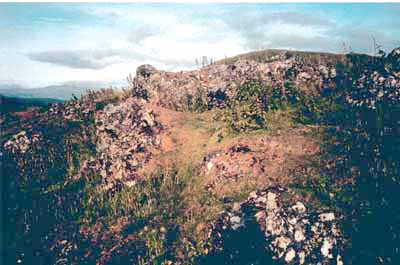 These are Burial Chambers made of large stone slabs covered with rocks to create large cairns. They are thought to have been built and used between 4000 BC and 2000 BC. After this time individual burials replaced communal tombs.
The three cairns on the south and western sides of Lochussie are of the Orkney-Cromarty type – there are a further six known cairns of this type on the Black Isle with another at Contin.
Tombs for the ancestors played a dominant role in the life of early farming communities. Built to endure the centuries, some at least remained in use over very long periods.
Few are intact either because of nineteenth Century “archaeological digs” (it was easier to break in through the top than find the entrance) or because they were handy sources of stone to build field walls. The local cairns have all but disappeared apart from the main stone slabs forming the Burial Chambers. 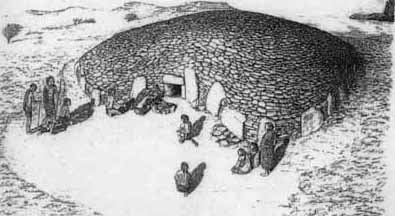 These are widespread throughout the British Isles. They consist literally of heat shattered stones and black earth, surrounding hearths and sunken stone cooking troughs. Normally situated close to a source of water they can be interpreted as cooking places where meat and fish were cooked in water heated by hot stones (possibly ritual) or alternatively as early saunas 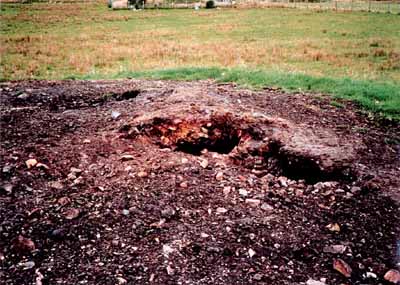 The most common traces of settlement from the Bronze Age are HUT CIRCLES. These are the remains of the stone foundations of timber built circular houses and appear as a ring in the grass or heather.
Roundhouses were built on stone foundations on which low turf walls would have been built up. The roof would have been supported by a ring of wooden posts and thatched with heather. The entrance often faced east.
Roundhouses continued to be built until at least 500 AD and possibly as late as 1000 AD.

The Roundhouses of this time are still visible as HUT CIRCLES. These are the low stone walls which now appear as a ring in the grass or heather, generally from 9 to 13 metres in diameter. They are among the most common prehistoric archaeological features in Scotland, with many examples recorded in the Highlands. Hut Circles are often found in groups of two or three, but there has been evidence of around thirty in one particular settlement.
Traces of cultivation are often found near Hut Circles in the form of small fields with scatters of stony mounds known as field clearance cairns.

Intertribal warfare, raiding and cattle stealing are all thought to be part of Celtic society as it emerged around 1000BC. From around 800 BC there appears to have been a decisive shift towards building fortifications. Knockfarrel was built around this time.

These early forts were built with timber laced stone ramparts. This phase of fort building spanned several centuries but passed out of favour due to difficulties in maintenance. If timbers rotted then replacement would require the virtual dismantling of the defences to effect repairs. The rotted timbers also left voids which allowed the ramparts to collapse. Finally, of course, if the timbers caught fire either accidentally or intentionally the walls could be fused into one vitreous mass (as can be seen at Knockfarrel today). 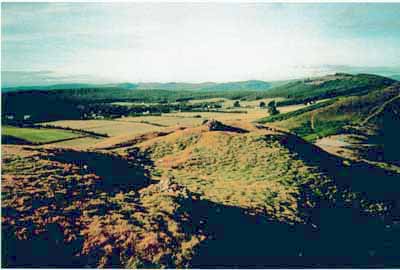 Knockfarrel is a single stone rampart fort built around 1000BC to 700 BC. The outline of the fort is confused by three later ditches (made by an excavation carried out in 1770) and by unusual outer works at either end of the fort’s possibly extended defences for the entrances.
It is thought to be one of the earliest forts built and was constructed with a timber framework to hold the stone walls together. When this framework was burnt either by accident or enemy action the stones forming the core of the walls melted in a process known as vitrification. Vitrified stone can still be seen in the ruined walls

What is thought to be the first ever archaeological excavation in Scotland, perhaps in the UK, took place on Knockfarrel in 1770.

A Mr John Williams, an engineer employed in the Highlands by the Commission for Forfeited Estates (after the Jacobite Rebellion) in 1746 started investigating the vitrified ruins which could be seen on a number of hilltops throughout the Highlands.

In 1770 Mr Williams cut three trenches across Knockfarrel, which can still be clearly seen today. In 1777 he published a book titled “Remarkable Ruins lately discovered in the Highlands”. The book was eventually published in Edinburgh as no London bookseller would publish it as it was considered to be fiction.

The explanation of what caused the fierce heat which burnt the walls of Knockfarrel is explained in the following story.

One day, Fingal and his warriors were out hunting, the unpopular Conan was left in charge. Finding him asleep, the women staked his seven braids of hair to the ground, then rang the alarm bell. Leaping up, Conan left half his scalp behind. Enraged, he drove the women into the Fort. Torching it and them, he left it as we find it today.

Another legend concerns Fingal’s Well (a reedy depression within the Fort).
It is said that removal of a stone plugging this “well” will cause Loch Ussie to burst up and flood the valley below.
It is also said that tha ancient Gaelic hero Fingal, with seven league boots needed only one step to stride from Knockfarrel to Ben Wyvis!

This is a spring issuing from a stone lined hole on the north eastern slopes of Knockfarrel.

It was associated with cures for particular illnesses. According to the New Statistical Account of 1845 “the water is of the purest kind and still within the last fifty years was resorted to by sick people and maniacs who always left on a neighbouring bush or tree a bit of coloured cloth as a relic”.

The Ordnance Survey of 1873 tells us that the well “had lately been covered in and now supplies Fodderty Old Manse”.

Some Holy Wells are possibly pre-Christian sites which were given a Christian significance by the early Church. 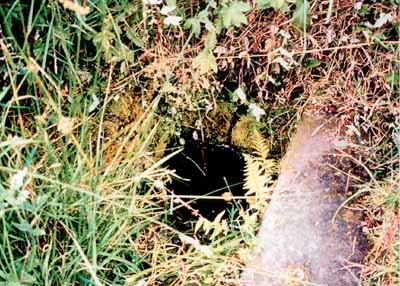 View more photographs on the archaeology of Maryburgh