The second statistical account (1907), mentions a school at Tollie, attended by 70 pupils who were taught english, gaelic, writing and arithmetic. This school was closed around 1882.

The site of the school is marked on the map, and the photograph shows what remains of the building. 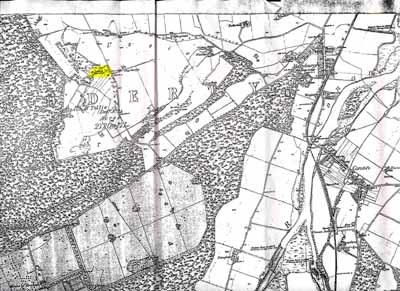 The old cottage and adjacent land at Tollie, Brahan, was gifted to the Scout Association for training purposes and as a camp site in the late 60s/early 70s. The cottage was upgraded and was re-opened in July 1987 by the late Mrs Matheson of Brahan who is seen here receiving a basket of flowers from Stuart Bain and Alan Walmsley. To Mrs Matheson’s right is the late Alexander Ferguson, Rector of Dingwall Academy.

The camp site closed in [?] and the area is now a golf course and a centre for observing Red Kite raptors. 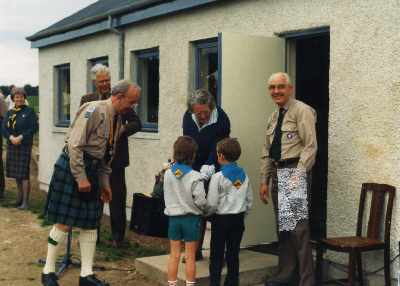 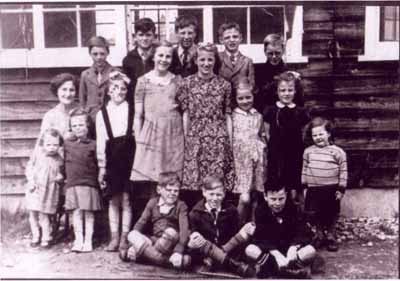 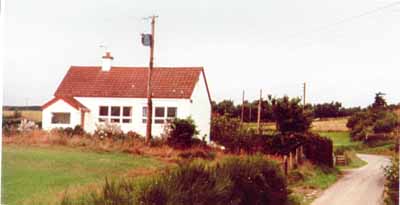 SCHOOL CLOSES AFTER QUARTER OF A CENTURY

The doors of the little, green wooden school nestling in the beautiful hills of Lochussie have closed for the last time. The Ross-shire Education Authority have decided to close the school which has served the children from crofts and cottages in the area for quarter of a century.

Needless to say last Friday afternoon, at the annual prize-giving, was a sad occasion for all – parents, former pupils and the 10 children attending the school. But none more so than for the teacher there for 16 of its 25 years, Mrs Annie Mackenzie. Mrs Mackenzie, who resides at Knockfarrel, has been given a similar position at Killearnan. 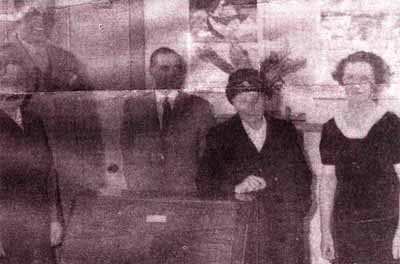 Friday’s gathering was presided over by Mr William John Mackay, Ian Mor, Knockfarrel, the chairman of the local branch of the Crofters’ Association. Mr Mackay referred to the fine capabilities of Mrs Mackenzie as a woman and teacher, and said that the closing of the school was a “very sad occasion”. He then called on local resident Mrs E. Ross, for many the school’s cook and cleaner, to present to Mrs Mackenzie with a handsome writing bureau suitably inscribed. The bureau was a token of respect for all Mrs Mackenzie had done for the community from the parents of pupils past and present. The oldest pupil, Brian Cameron, then presented a travelling clock to Mrs Mackenzie on behalf of the pupils, and the youngest pupil, Bryan Macleod, presented her with a beautiful bouquet. Mrs Ross was the recipient of an electric kettle handed over to her by pupil Isobel Simpson.

It was with great feeling that Mrs Mackenzie addressed the gathering and recalled her many happy hours in the little school. She referred to the many pupils who had passed through her hands and finished their education to make their mark in the outside world.
The ten children, with their prizes of books and purses on their laps, sat silently as they listened to their teacher’s voice for the last time in their little schoolroom. Even the five-year-olds were on their best behaviour, as if sensing the end of an era. And Mrs Mackenzie, with tears welling in her kind eyes, had a word for each one of them.

The ceremony over, the children, who will continue their education at nearby Maryburgh School, ran happily out to their compact playing field to take part in their annual sports. Yes, Friday was a sad day in Lochussie ….. but we are sure that every pupil who commenced their education in that schoolroom in its picturesque surroundings, will always remember those days.

View more photographs of the schools