The Chisholms - Hugh and Donald

Hugh and Donald Chisholm are distinguished Maryburgh pipers who have played in many overseas locations in Canada, France, Sweden and Ireland, and have played at many major events and for many celebrities. 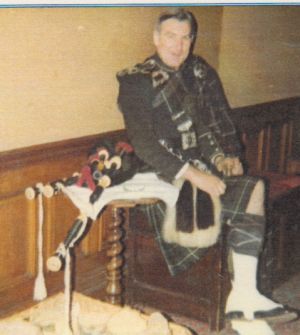 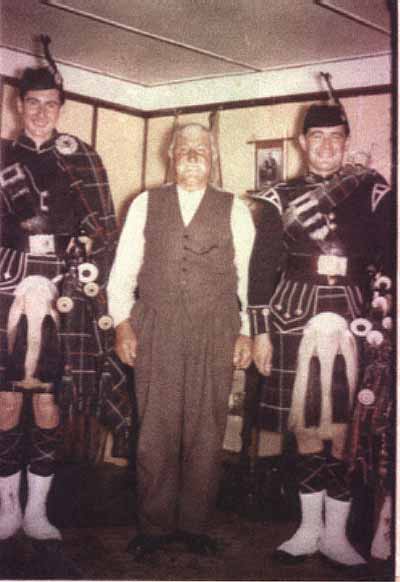 Donald (left) and Hugh (right) Chisholm with their father.

My late father, Hugh Chisholm, loved to tell stories and as a young girl I can fondly remember sitting round a big log fire on a cold winter’s night along with my mother and three brothers recalling his boyhood days, his war service in the Great War 1914-1918 and of a famous family of pipers who lived in Maryburgh. I often thought of these pipers and was determined to find out more about them.

With the help of my brother Hughie, I managed to obtain a book called “The Northern Meeting” by Angus Farrie from the now-deceased Pipe Major John Burgess, Invergordon.

It stated a most distinguished family of pipers to emerge in the middle of the nineteenth century was the redoubtable Camerons.

Down the years, many local young men learned to play the pipes but none ever came up to the standard of the Camerons. Nevertheless, my own brothers, Hughie and Don, get much pleasure playing in the Pipe Band scene which over the years took them to many foreign countries including Canada, France, Sweden and Ireland.

So I would strongly urge any young people who are musically minded to take every opportunity that is available to them to learn to play an instrument in the school and to get the first class tuition from people like Pipe Major John Burgess, who himself won the Gold Medal in 1950. 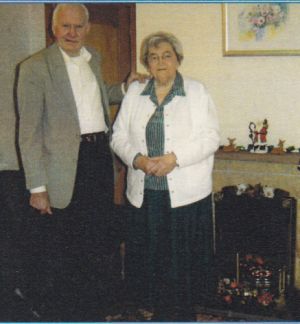 I was born and brought up in the village of Maryburgh, Ross-shire. My piping career started when I was 14 years old – being given my first lessons by Pipe Major Addison Watson, who at that time was Pipe Major of the Dingwall British Legion Pipe Band. Joining the Band two years later I received further tuition from the late Mr Calum MacDonald, caretaker of Inverness Castle.

I was called for National Service when I was 18 years old and joined my local regiment the Seaforth Highlanders at Fort George. After basic training I joined the Pipe Band under the late Pipe Major Donald Macleod. On leaving the army I joined the 11th Battalion Seaforth Highlander TA Pipe Band with whom I served for 12 years, going from there to Invergordon Distillery Pipe Band under Pipe Major Donald Shaw-Ramsay for 4 years. From there, back to Dingwall Royal British Legion Pipe Band for a further 10 years, and then to Strathpeffer & District Pipe Band. 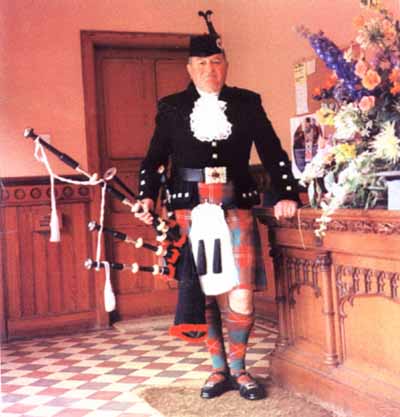 Feature on Hugh Chisholm in Ross-shire Journal of 7 October 2005:

After 60 years – and participation in no less than five pipe bands, founder or co-founder of at least three – Maryburgh piper Hugh Chisholm has given up band work altogether. At the age of 74 he is launching himself afresh. He will concentrate on private work, including tuition, and social events like weddings, funerals and any sort of private gathering, parties included.

He is well used to being invited to pipe at prestigious events before famous personalities in significant Highland residences. One was the late showbusiness personality Les Dawson and his second wife Tracey. The couple were on honeymoon at Eilean Aigas House, romantically nestled on a tiny island in the middle of the Beauly River. And Hugh was called on to entertain the newly weds.

The house was the family home of Sir Hugh Fraser, younger brother of the late Lord Lovat of WWII commando fame. Sir Hugh, who was MP for Stafford for many decades, was married to famous writer Antonia Fraser, daughter of the social reformer Lord Longford.

The current Lord Lovat, Simon Fraser, now in his late twenties and employed in the city, was a pupil of Hugh Chisholm when he was a youngster. Hugh used to attend Beaufort Castle to teach the young Master of Lovat. But the piper does not know if his young pupil kept up the piping.

An early learner of the pipes himself, Hugh made do with whatever substitutes were available to use for ‘pretend practice’ as a wee lad at the family home in Maryburgh.

He told me this week, “I always wanted to play the pipes. And my elder sister Margaret Macleod, who lives at Muir of Ord, reminded me recently that when I was six years old I used to walk up and down the garden path with a broom handle and some old tins and pan lids clattering, pretending to be piping!

“By 14 I started to learn the chanter and by 16 I was ready to play the pipes. My first tutor was the late Pipe Major Addison Watson, PM of the original Dingwall British Legion Band in the late thirties. He had a class at Dingwall Academy.”

Addison was the father of Hugh Watson, another busy piper locally these days, in residence at Tulloch Castle Hotel.

Hugh Chisholm’s extensive career and extraordinary experiences, touching on the lives of many legendary twentieth century exponents of the bagpipe, could easily fill a book.

Highlights have included his National Service when he played for the Highland Brigade Training Centre Pipe Band at Fort George under the famous Pipe Major Donald Macleod, a man with eight piping clasps and one of the greatest players ever heard. He had been a Seaforth Highlander who escaped the horrors of St Valery in 1940 and made it back to Fort George under his own steam. On a mission to Sweden on the Royal Navy flagship HMS Indomitable the band played both alongside the Royal Marine Band on board, and later for the King of Sweden

Then followed 12 years with the Territorial Army Pipe Band at Dingwall. RSM there was a remarkable figure in the world of piping – John Maclellan, who rose to become the main instructor at the army school of piping at Edinburgh Castle as captain. He was the first ever commissioned Pipe Major.

Then Hugh was a leading light amongst others in a brand new band which soared to the heights of World Class piping and drumming – the much vaunted Invergordon Distillery Pipe Band. In the late sixties the band came within a whisker of becoming world champions at the Bught Park, Inverness. Having earlier swept all before them in major competitions, they had to settle for third place, the barest of points separating them from winners Glasgow Police Pipe Band and runners-up Muirhead and Sons of Grangemouth. Hugh was pipe sergeant with the Invergordon band.

Many famous and highly talented pipers and drummers were drafted in by founder Frank Thomson from all over Scotland to augment the local talent which included such personalities as the late Bobby Macrae, the original Pipe Major, and drummer Willie Macdonald of Dingwall, production manager at the new distillery and the man credited with the original idea of starting up a distillery band.

At the band’s zenith Pipe Major was Donald Shaw Ramsay, a former Edinburgh policeman who had been badly injured – shot on duty by a young offender. Included too were now recently deceased Pipe Major John Burgess (already in the North) and Pipe Major Trevor Dear, current PM of the newly launched Dingwall RBL band – now in highly successful renaissance – which Hugh helped re-establish too.

Other highlights of a remarkable piping life have included being a key figure in establishing the Strathpeffer and District Pipe Band twenty years ago and now led by Pipe Major James Mackenzie of Dingwall. Hugh was the first Pipe Major. His son Michael has two decades’ service as a side drummer at the Strath. Hugh’s younger brother Donald is a widely experienced piper too, currently playing with the Dingwall band.

Hugh said this week, “I still have a great interest in pipe music and play at various events. I do bagpipe maintenance work and hope to start up new pupils in the very near future. One of my former pupils, Grant Milne of Maryburgh, is now teaching young players at the Glasgow College of Piping.

Another notable and prizewinning former pupil is young Muir of Ord lass Carla Urquhart, aged 11, one of the youngest now playing with the Dingwall RBL band under the tutelage of PM Trevor Dear.

So, with a wealth indeed of bagpipe playing and instruction to his credit, Hugh is wished well in his new venture.