A tower house built for the MacKenzies of Kintail and Seaforth. Much enlarged and remodelled in the late 18th and 19th centuries, demolished in 1952. The fine stable range has converted to a house. The castle was demolished in 1951, the rubble unceremoniously used as foundations for the new Conon Bridge. 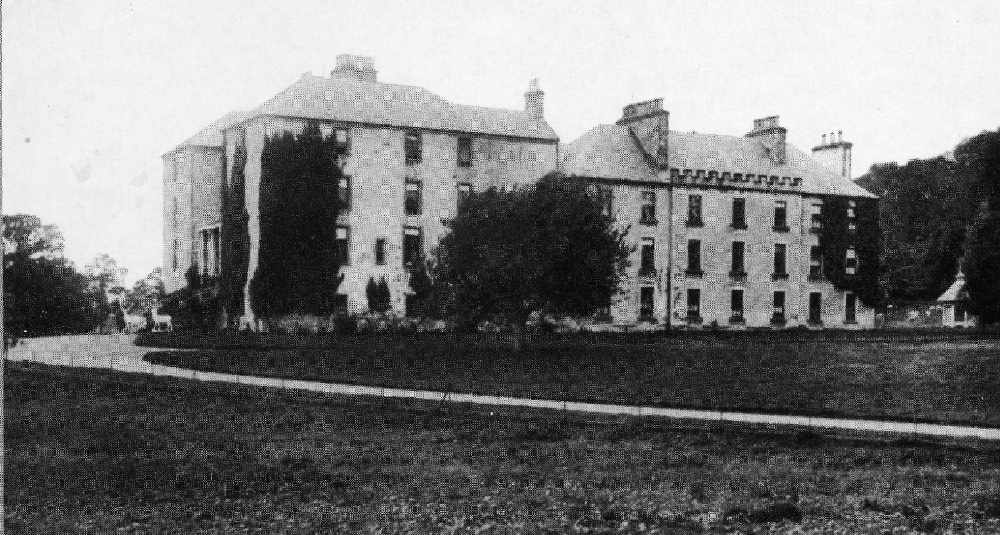 The Castle: Home of the Seaforth Highlanders

Due to the exorbitant costs of upgrading, Brahan Castle was dismantled in 1953. Built in the early 17th century, it was a stronghold of the MacKenzies.

In this picture, the Seaforth Highlanders are drilling in front of the castle during the time it served as a regiment barracks. Brahan was a grand residence, teeming with servants and the social elite of the time, and renowned for its elegant balls and shooting parties.

The Brahan Seer foretold the demolition of the castle. 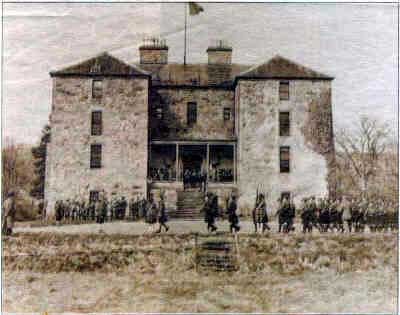 The Entrance to the Castle

Postcard, bearing Edward VII stamp and franked 18 July (year unclear but must be before 1911), addressed to Miss Lundie, Estcourt, Beauly, and reads:

Dear Nan, I hope you got home entire yon night. Haven’t heard yet if we are to get Friday, most likely not. Don’t forget the fan book like a (unclear) and anything in the way of recitations. Do you remember yon recitation book we had at one of the concerts. Martha did one and “Dg” McLean yon one “Never go to France”. Can you by any stretch of memory recall the name of that book. This imposing entrance is just a wee bit up the road from the school.

Yours with love, Nan. 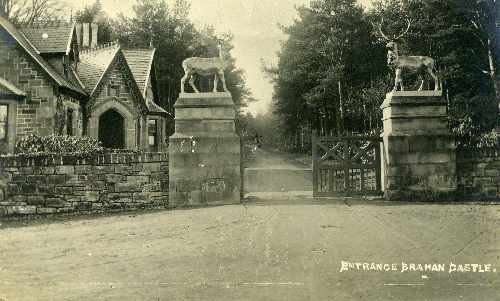 The interior of the Castle

Below you’ll find a collection of photographs of the interior of Brahan Castle. At present we have little precise information about the interior of the castle so we’ve had to guess at the likely functions of the rooms in order to give the images more convenient headings. We would welcome contributions and information relating to these images. If anyone would like to contribute to this or any related topics please contact Ross and Cromarty Heritage Society . 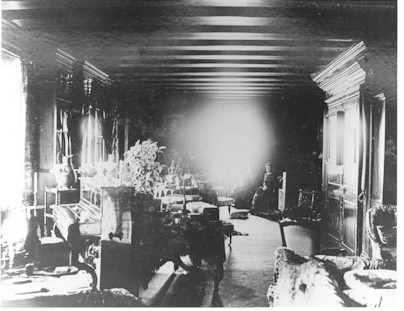 “History of the Golden Bed of Brahan.

“Colonel Daniel Mackenzie was for some time in the service of Colin Earl of Seaforth and afterwards, going abroad, served in the wars for several years in Moscow and Flanders.

“There, having by his merit and valour run through the inferior degrees of honour, he at length attained that of a Colonel of a Regiment of Foot and married the daughter of Dean Wolfard, Count de Vredrad, Governor of Buldorbe in Flanders, a descendant of the noble and illustrious House of Nassau.”

Having a desire to see his friends and native country, Colonel Mackenzie came over to Scotland and brought to his old master Colin Earl of Seaforth a rich and sumptuous bed, commonly called the Golden Bed of Brahan because of the gold trappings, embroiderings and gildings that were upon a sea-green coloured velvet furniture belonging to it. But Earl Colin, dying before his arrival, he presented it to Earl George.

Now it is in Falkland Palace, in Fife, under the care of the National Trust of Scotland. 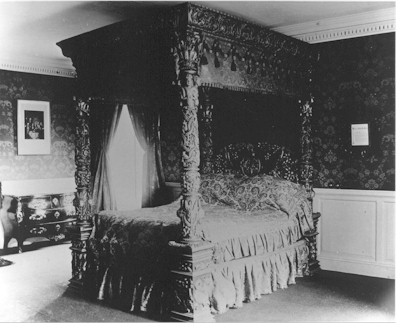