Mary Elizabeth Frederica MacKenzie returned to Brahan Castle in 1815, upon the death of her father, to take over her inheritance. She was born on 27th of March 1783 at Tarradale in Ross-shire. She was married twice. Firstly, on 6th November 1804, to Vice-Admiral Sir Samuel Hood, who had been in command of British Naval Forces in the Indies. He died at Madras, in India, on 24th December 1814.

Her second marriage, on 21st May 1817, was to Rt. Hon. James Alexander Stewart, son of the Earl of Galloway, who assumed the name of MacKenzie. Together they had 6 children, three boys and three girls. He died in 1843.

The family bereavements in the period up to her possession of the estate and beyond to the time of the Disruption must have been a time of poignancy for her, and of particular sadness, perhaps, was the accidental death of her younger sister, Caroline, in her own company in a carriage accident at Brahan in 1823, an occurrence commemorated by a monument by the roadside at Brahan. In the village of Maryburgh the title of Lady Hood and the name of her son, Francis Pelham Proby, who died in 1844, are established in the names of the two principal streets. Her benevolent interest in the affairs and well-being of the community continued up to her death at Brahan Castle in 1862 at the age of 79, predeceased by two of her sons, and shortly afterwards by two daughters. Her burial place can be identified within Fortrose Cathedral. 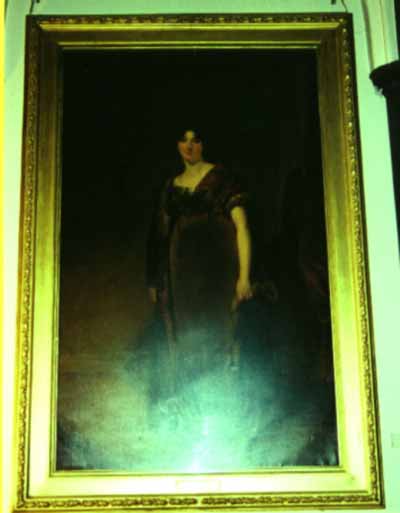