Donald Cameron and his brother Sandy were in fact born in Strathconon and moved to Maryburgh around 1845. They competed annually at the World Championships (“The Northern Meeting”)

In 1845, Donald was appointed Piper to Keith Stewart Mackenzie of Seaforth.

Sandy Cameron was a very successful competitor of his day and won Prize Pipe in 1846 and Gold Medal in 1862. Sandy died at the early age of 49 years.

Donald had three sons, Colin, Alick and Keith who were all outstanding players of Piobaireachd. Colin, taught by his father, won Prize Pipe in 1861, Gold Medal in 1865, and was Piper to the Duke of Fife.

Keith started to compete at the age of eleven. He was a Pipe Major of the Highland Light Infantry.

Seaforth Cottage was given to Donald Cameron, pupil of John MacKay of Raasay and source of the Cameron school of Piobaireachd playing, in 1864 and was lived in by him, then his son Colin and grandson Colin.

Colin’s son, also called Colin, was the last member of the Cameron family to live at Seaforth Cottage (the finest house in Maryburgh at that time) but he never played the pipes. 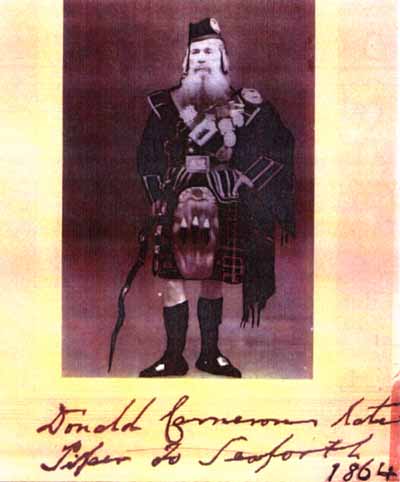 Donald Cameron, Piper to Keith Stewart Mackenzie of Seaforth, in 1864

My late father, Hugh Chisholm, loved to tell stories and as a young girl I can fondly remember sitting round a big log fire on a cold winter’s night along with my mother and three brothers recalling his boyhood days, his war service in the Great War 1914-1918 and of a famous family of pipers who lived in Maryburgh. I often thought of these pipers and was determined to find out more about them.

With the help of my brother Hughie, I managed to obtain a book called “The Northern Meeting” by Angus Farrie from the now-deceased Pipe Major John Burgess, Invergordon.

It stated a most distinguished family of pipers to emerge in the middle of the nineteenth century was the redoubtable Camerons.

Down the years, many local young men learned to play the pipes but none ever came up to the standard of the Camerons. Nevertheless, my own brothers, Hughie and Don, get much pleasure playing in the Pipe Band scene which over the years took them to many foreign countries including Canada, France, Sweden and Ireland.

So I would strongly urge any young people who are musically minded to take every opportunity that is available to them to learn to play an instrument in the school and to get the first class tuition from people like Pipe Major John Burgess, who himself won the Gold Medal in 1950. 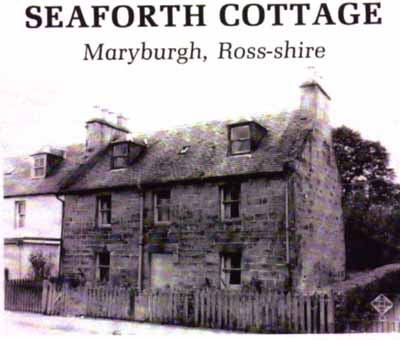 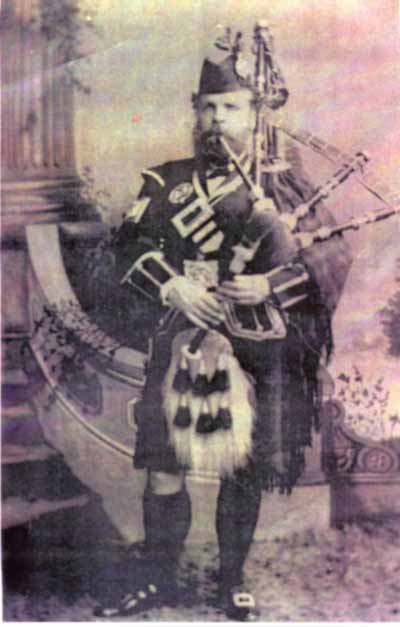 Colin Cameron, Piper to the Duke of Fife