Avoch and Killen WW I page 8 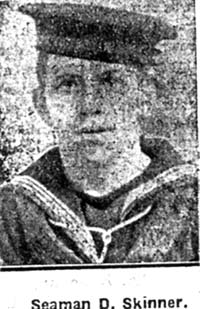 TRAGIC DEATH OF AN AVOCH SEAMAN

On the 8th inst. sincere regret was felt for Mr David Skinner, 8 Factory Buildings, Avoch, in the tragic death of his eldest son, Seaman David Skinner, R.N.R., 5272 A, in his twentieth year. He was the only Avoch lad in his ship and seems to have won the esteem of his shipmates, as their remembrance of sympathy denotes. The sad intelligence was unusually pathetic, as only that morning a letter came from the deceased, and the wire being so addressed to his mother who had predeceased him a few weeks ago, a mother sorely missed by her husband and young family. Seaman Skinner had leave home, but did not arrive in time for the funeral.
The portrait of the deceased appears above. 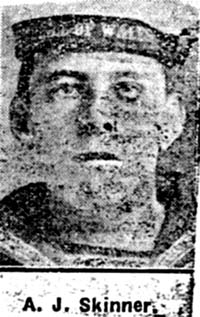 5282 A. Seaman John Skinner, R.N.R. aged 21 years, whose photograph appears to-day, was drowned on December 13th 1917. During the past two years he served in a Naval vessel and was lookout when she was torpedoed. He must have leaped into the sea unhurt as he was afterwards seen by three survivors who were clinging to a raft within 20 yards of him. They urged him to come alongside but Seaman Skinner, believing that the frail raft already had more than it could sufficiently support, refused to take any risk saying, “It’s better that one life should be sacrificed than four.” An expert swimmer at an early age, now when every effort was needed he made a gallant attempt to reach an empty raft which seemed about a hundred yards distant. Swimming in the teeth of a gale he was seen to stop about half way, turned his face towards his shipmates and waved his hand calling distinctly, “It’s all over now, farewell”. His was a doubly noble sacrifice.

Deceased was the second son of Mr and Mrs Alex Skinner, 11 Factory Buildings, Avoch. He was a fine lad of sterling character and well-liked by a large circle of friends. Prior to the war, Seaman Skinner was engaged in the fishing industry and joined the Royal Naval Reserve in March, 1914. Since being in the service he experienced some trying ordeals. He was on duty aboard other two boats which were mined and some of the crews lost. His eldest brother, who is on foreign service in the Navy at present, also served on a vessel which was mined. 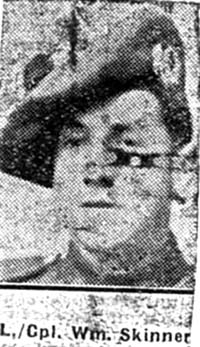 There is reproduced today a photo of 39472, L./Cpl. William Skinner, Cameronians (Scottish Rifles), eldest son of Warrant Officer Alex. Skinner, R.N., and Mrs Skinner, 3 Geddeston, Avoch, who, as already reported was killed in action in France on April 9th, 1918, at the age of 19 years. A fine, manly boy, beloved by that knew him, his is much mourned in his early death, and sympathy goes out to the parents in their bereavement.

[24.05.1918]
Warrant Officer Alex. Skinner and Mrs Skinner, 3 Geddeston, Avoch, have been officially informed that their eldest son, 39472 L./Cpl. Wm. Skinner, Cameronians (Scottish Rifles), was killed in action on April the 9th. He went to France in January, 1918, and took part in the severe fighting. He was in the nineteenth year. Prior to his enlistment in the H.L.I. in February, 1917, he served in the Recorder’ Office, Invergordon. L./Cpl. Skinner was eager to do his part. The Rev. T. Kerr, Avoch, made touching references to the ending of a young and promising life at his post of duty. Much sympathy is felt for his parents, brothers and sister.

The parents are without precise particulars as to the manner L./Cpl. Skinner met his death and would gladly receive information. A photo appears to-day.

See details of his brother Donald below 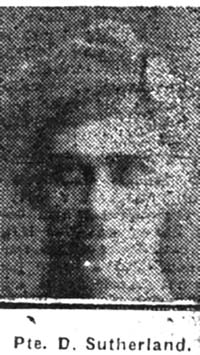 Mr and Mrs A. Sutherland, Seaton Cottage, Factory Lane, Avoch, would be grateful for any information in regard to the fate of their son, 200531 Private Donald Sutherland, No. 1 Platoon, A Company, attached 5th Seaforths, who has been reported missing since March 21st, 1918. Private Sutherland, whose photograph is given above, was an apprentice painter in Avoch in 1914, and being then 18 years old and desirous of serving his country, he proceeded to Dingwall in September of the same year and enlisted in the Seaforth County Territorial Regiment. Receiving his early training at Bedford, he proceeded to France in the summer of 1915. At Loos, on 25th September, he had the misfortune to be wounded on the face. Sent to the home country he soon recovered, and reporting at Ripon he soon returned to the Front. In May 1917 he got a second “Blighty” and for a period he remained at the Convalescent Camp at Cromarty. For a third time he returned to France. Then came the great German offensive on March 21st. The 5th Seaforths were in front line at the time, and gallantly though they fought, they could not stop the Jerry hordes. Any information of this manly young lad would alleviate the sufferings and long suspense of the parents.

See details of his brother Alex. Sutherland above 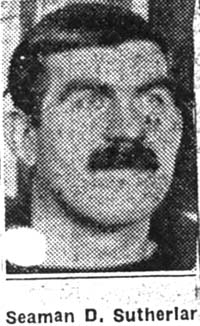 Seaman David Sutherland, R.N.R (2873c), who was reported missing since March 18th, 1917, is now stated by the Geneva Red Cross to be at Lazarett, Bergkassese, Munster, Westfalen, Germany. He was wounded, and has now written home to Avoch with kind solicitude for those whom he knows to be anxious. A man of outstanding Christian nobility, his many friends hope that his captivity will be brightened by his calm courage. Seaman Sutherland has been on duty since mobilisation, since when his father passed away. His wife and three children reside at 50, Henrietta Street, Avoch. A photograph appears today. 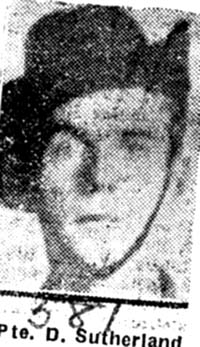 The sympathy of many goes out to Mr and Mrs David Sutherland, 14 Bayview Road, Yarraville, Melbourne, and formerly of Avoch, in their sad loss of their only son, killed in action on the Western Front. They cabled the news on November 30th to their old pastor, Mr Kerr, Avoch. It is over four years since the family left Avoch and settled in Melbourne. In August last Pte. Don. Sutherland, Victoria Infantry, spent his furlough with his aged grandmother at Avoch, and looked a typical stalwart Highlander willingly upbearing his Empire’s cause. He had been through many severe engagements unscathed, and was very fit. It is more than two years since he sailed from home. He was some time with the contingent waiting to be drafted to the Dardanelles. Instead he was among the first arrivals in France. Prior to enlistment Pte. Sutherland was learning cabinet making. He was in his 21st year. He fell at his post like a soldier brave. His parents and two sisters in their distant home receive the sympathy of kind friends in the Homeland. 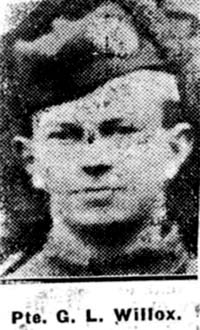 Sincere sympathy is felt for Mr and Mrs Willox, Muiralehouse, Avoch, who have had official information that their only son, No. 25907 Private George L. Willox, Seaforth Highlanders, died from wounds on July 22nd at the 1/2 Highland Field Ambulance Dressing Station, France. He was shot through the head and left arm. His parents have had private news of him being reverently buried in a British Military Cemetery. He was in his 19th year, and was a promising lad, and a favourite in his platoon. Prior to Pte. Willox joining the Cameron Highlanders on March 21st, 1917, he assisted his father, who was employed on Easter Suddie Farm. Before going to France he was transferred into the Seaforths, and left in a draft in January, 1918. He took part in the spring offensive, and was wounded in the head and leg with shrapnel on March 21st, and after a few weeks in base hospital he was removed to a hospital in England, and in June reported himself at the camp, Cromarty, where he remained until July 6th, when he again left for France.
A photograph of Private Willox appears to-day.