Avoch and Killen WW I page 2 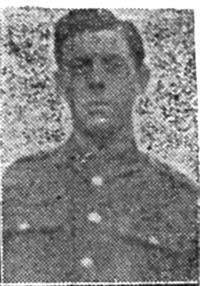 As reported last week, Pte. Robert Jack, Ross-shire Seaforths, son of Mrs George Jack, Annaville, Henrietta Street, Avoch, was wounded in the great offensive. A photo appears to-day. In a letter written by a Canadian chaplain to the mother it is reported that Pte. Jack was wounded on the right leg, and that the leg had been amputated below the knee. “No need to worry, cheerio!” is this gallant soldier’s message to his mother.

Private Jack is now in his 22nd year, and served his apprenticeship as a gardener in Rosehaugh Gardens, but was on war service at a naval base prior to his enlistment in November, 1915, in the County Territorials. He went to France in April, when he was drafted into the Regular Seaforths, and eighteen months afterwards returned to Aldershot. He was home on furlough during the summer, and again proceeded to France on New Year’s Day. 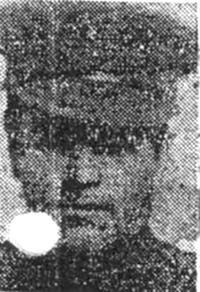 No. 123869 Acting Lance-Sergt. William Jack, Machine Gun Corps, was severely wounded on August 28th, 1918. His right foot was blown off and he also received injuries in the head, arm, and thigh. He is at present in a hospital in France, where a chaplain in attendance saw him and sent home twice reports of his condition, which was being borne with manly patience. Lce-Sergt. Jack is in his 23rd year. He mobilised in August, 1914, with the Royal Naval Reserve but was discharged at the end of 1915, and early in 1917 he enlisted into the M.G.C. Battalion, and was in some trying contests on the Western Front. He is the eldest son of Mr and Mrs Alex Jack, 49 Henrietta St, Avoch. 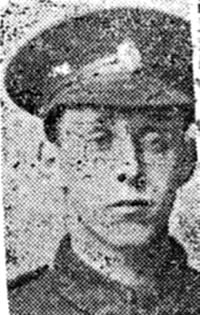 No. 33599 Private Alex. Leitch, M.T., attached to the Royal Warwick Regiment, is at present in Queen Mary’s Military Hospital, Whalley, Lancashire. He was recently wounded in the left arm and hand, and had his forefinger blown off. News of his progress has been received by his relatives, Mr and Mrs A. Leitch, merchant, 6 Margaret Street, Avoch, with whom Private Leitch resided since being orphaned. His only sister is now on duty at Inverness. Prior to enlisting in the Motor Transport in October 1915, Private Leitch was serving his apprenticeship with Messrs Macrae & Dick, Inverness, and was on duty in the garage at Invergordon. After six months training he proceeded to France, and was a period with the motor transports until drafted into the Royal Warwick Regiment, and was over two years on the Western Front. He also saw service in Italy since a year, but returned to France a few weeks ago. 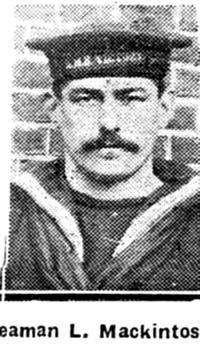 Seaman D. Patience and his chum, Seaman Lewis Mackintosh, were photographed at Groningen. Seaman Macintosh lost an elder brother on the HMS Flirt being sunk. His parents reside at 6 James Street, Avoch. 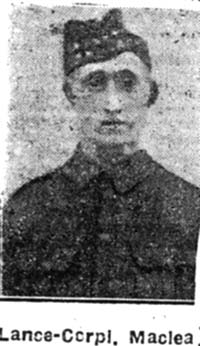 Lance-Corporal Maclean, Pitfour, Rosehaugh, Avoch, posted missing believed killed on May 9th, 1915, was attached to Black Isle Coy., 1/4th Seaforths. Much regret was felt when it became known that so promising a life had made the supreme sacrifice. He was so esteemed in Avoch, where his kind and earnest endeavour among the youths whom he encouraged to maintain temperance, will be remembered in the IOGT Lodge. He was the eldest son of Sergeant Maclean. Another son, Private Wm. Maclean, was also gassed on the same date, and is now on duty at headquarters, having been with his regiment on foreign service ere going to France, with the Seaforth Regulars. A photograph appears today. 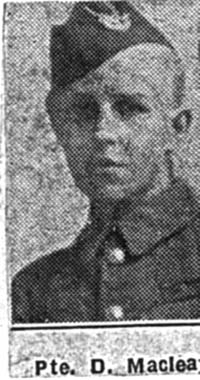 It was with feeling of genuine regret that Avoch received the news that Pte. Duncan Macleay, Seaforth Regulars, had been killed in action. Pte. Macleay was only 19 years of age, and was a great favourite in Avoch, of which he was a native, and from where he passed into the Munlochy Bank to act as clerk. He was a particularly nice and obliging lad. His father has for many years acted as church officer in the Parish Church, and as School Board officer and janitor, and no man is more highly respected than he. For him as well as for the sister and brothers deep sympathy is felt. A photograph appears to-day. 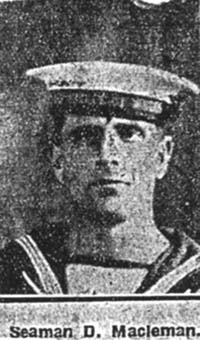 After eight months of waiting, news has come of the safety of Seaman Donald MacLeman, R.N.R., 5481 A, as a prisoner of war at Bagdad. Writing on a post card, dated June 3rd, to his sister, he says that he is quite well, and, in spirit so characteristic of our men suffering unparalleled hardships in this war, the captured sailor trusts that those at home will not worry about him. His name appeared among the wounded in the Persian casualties. Seaman MacLeman is the eldest son of Mr. Wm. MacLeman, 57 Henrietta Street, Avoch. He was 23 years on August 2nd inst. Before the war he had only three months experience in the Royal Naval Reserve. 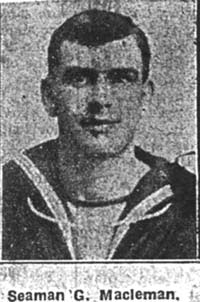 Above is reproduced the photos of two Ross-shire Naval men, pals, who, in Eastern waters, are doing their bit to keep the old flag flying. After “twelve months’ experience” at the Dardanelles, they reached Malta, and, having a few hours’ leave, were photographed together, and kindly sent the result to the Editor of the Ross-shire Journal, which paper reaches them with remarkable regularity. Their ships – two well-known vessels – happily met. The men are Leading Seaman George Macleman and Able Seaman John Macleman, and both belong to Avoch. 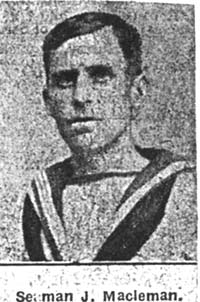 There is reproduced the photos of two Ross-shire Naval men, fast pals, who, in Eastern waters, are doing their bit to keep the old flag flying. After “twelve months’ experience” at the Dardanelles, they reached Malta, and, having a few hours’ leave, were photographed together, and kindly sent the result to the Editor of the Ross-shire Journal, which paper reaches them with remarkable regularity. Their ships – two well-known vessels – happily met. The men are Leading Seaman George Macleman and Able Seaman John Macleman, and both belong to Avoch.