Avoch and Killen WW I page 6 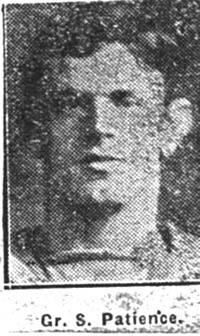 Further Information about the family

The name of A2572 (A2372?) Gr. Simon Patience, seaman, R.N.R., appeared in the London Gazette list of honours for distinguished service. He was awarded the Distinguished Service Medal for his notable markmanship on one day last year, when, while in the Atlantic Ocean, he engaged a hostile submarine in contest, and his quiet daring achieved the final score. His Captain and the crew so admired his plucky action in thus safeguarding them that on their arrival in home waters they presented Gr. Patience with a beautiful wristlet watch and gold signet ring. The following letter from his Captain duly reached him: “Dear Patience – I heartily congratulate you upon your well merited D.S.M., and wish you long life to wear it. I am to have the D.S.C., and am having a voyage off, and shall be glad to see you if you are ever handy. Don’t fail to call if you have the chance. All hands were pleased to hear of the decoration. Pretty good proof of her capture.”

Gr. Patience, who is the son of Mr and Mrs Patience, 30 High Street, Avoch, and whose photo appears today, came home on leave in October 1917, and his many friends were honestly proud of his fine achievement. Since then he has earned further distinction, and it is hoped that his name may again be seen in the list of honours. He is at present on foreign service. Gr. Patience, who is in his 25th year, joined the R.N.R. in November 1909. Prior to the war he was engaged in the fishing industry.

An elder brother is also in the Navy, Seaman James Patience, having joined the R.N.R. in November 1903, whilst the eldest brother, Mr Donald Patience, is now doing Admiralty work. Two younger brothers made the supreme sacrifice in this war. Sergt. G. Patience, 1/4th Seaforths, was killed in France on May 7th, 1915, and buried in the beautiful cemetery at Vielle Chapelle. He enlisted in September 1914, and was an apprentice painter at Avoch. He was 20 years of age. Seaman Wm. Patience joined the R.N.R. in January 1914, and was aboard the HMS Flirt when she was sunk on October 26th, 1916, during a bombardment on the Belgian coast. He was in his 18th year.