Midway on the ridge above Strathpeffer extending from “The Cat’s Back” to Knockfarrel can be found the Friendship Stone, erected to commemorate a link between Dingwall Academy and Nalband, Armenia.

In December 1988 a devastating earthquake occurred in Armenia, causing between 25,000-50,000 deaths, 130,000 people injuried, and the destruction of almost half a million buildings. The scenes unfolding in the media touched the hearts of many but emotion was no substitute for practical help required.

Dr Kerr Yule, principal teacher of physics in Dingwall Academy, initiated a fund to aid Nalband school and so successful were the efforts of pupils in Dingwall and throughout Scotland, that the sum of £23,000 was raised. A cheque for this amount was handed to a representative of the Soviet Embassy in London and he, in turn, presented the school with a Medal of Honour.

In 1989 a group of pupils from Dingwall Academy, members of staff, the rector and the chairman of Highland Council’s education committee went to Armenia, visited devastated villages and the school which had received the aid.

Pupils from Armenia paid a return visit during which they stayed with families in Dingwall. They brought with them the Friendship Stone in appreciation of the link between the two countries. The stone shows three people embracing but the interpretation plaque is now missing, a victim of vandalism. During their visit the group was given a reception by the District Council during which the children received gifts. 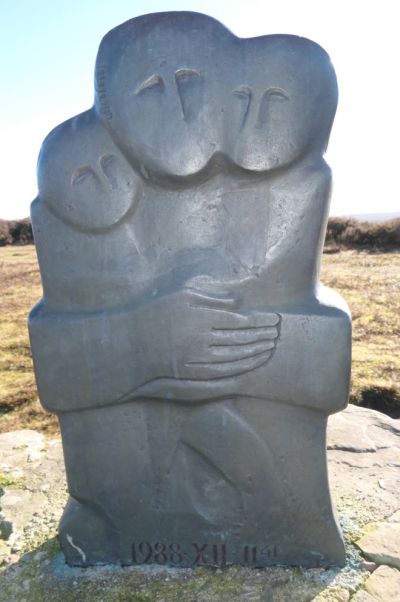 Midway on the ridge above Strathpeffer extending from "The Cat's Back" to Knockfarrel can be found the Friendship Stone, erected to commemorate a link between Dingwall Academy and Nalband, Armenia.
Slideshow
View 5 photos