At the end of the battle of the Park, which took place in 1487 at the site of present Youth Hostel,* the MacKenzie chief moved from Eilean Donan to Kinellan in Strathpeffer. He built himself a Crannog to defend himself against intruders.

Wooden stakes, usually of oak,were driven in and the fortress given a secure base.

At the time of the first world war Hugh Fraser found a wooden boat in poor condition which was used for constructing the crannog.

The Kinellan crannog was in use for several generations and was the centre of many stirring, often tragic, events.

The Crannog in Loch Kinellan

After the Battle of Park, 1487, which took place at the site of the present Youth Hostel*, the MacKenzies defeated the MacDonalds. The MacKenzie chief of the time moved his seat from Eilean Donan to Easter Ross, in fact to Kinellan at the west end of Strathpeffer. Times being unsettled, he decided to build himself a crannog. The idea was nothing new.

A crannog was a form of defence common in Western Europe long before the Christian era. If nature did not already provide one, an ‘island’ was constructed by the transport of large quantities of stones and other debris to a suitable spot. When this was firmed up, wooden stakes, usually of oak, were driven in and the fortress given a secure base. The surrounding area was then flooded to the appropriate depth by the damming of an adjacent stream, leaving above water level a jetty for the boat, and at about water level a twisting causeway to the shore, on which in the event of sudden attack the invader would be at an obvious disadvantage. About the time of the First World War the site was fully excavated by Hugh Fraser**, science master at Dingwall Academy. Certain finds were made, including a wooden boat in poor condition, which had been used in constructing the foundations. The loch is easily approached either from the golf-course or by the farm road opposite the youth hostel.

The Kinellan crannog was in use for several generations and was the centre of many stirring, often tragic, events. In time, however, the Laird, or chief, aspired to more impressive accommodation. So Lord Seaforth, as the Kinellan Mackenzie then was, built himself the really palatial castle at Brahan. He had, however, just settled into his new abode when he heard that tax commissioners were on their way from Edinburgh to assess him. At once the noble lord pulled up his new roots and returned to Kinellan until the visitors had departed! (source not known) 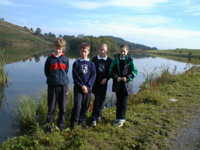 Crannogs are defensive homesteads: they were water-bourne communities, that lasted for centuries. They were occupied from as early as the Neolithic period, some 5000 years ago until the 17th Century AD.

The crannog is a simple roundhouse, deliberately built on water to keep them safe from enemies. Crannogs were built as free-standing, timber dwellings in woodland environments, and as stone buildings on man-made or natural rockyislands when timber was not readily available. their remains are occasionally found close together, but more commonly found at opposite ends of the loch.

Investigations show that crannogs are unique to Scotland and Ireland, differing in many ways from the other lake dwellings found in Europe.

How to make a model Crannog

What we needed: raffia, straw, twigs and wood. We made an eight star base of wood and put in a centre post. We got some cocktail sticks, then stuck at the ends of the wood.

We put twigs over the floor then covered it in moss. Then we wove raffia in and out of the cocktail sticks. We built a frame of twigs for the roof, we tied straw together to make bails that were then tied on the roof.

By Donald and Craig. 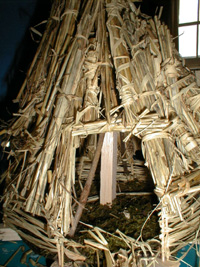 Links to other websites of interest:

The Scottish Crannog Web Site http://www.crannog.co.uk is well worth visiting, as is the actual site itself.

The Scottish Crannog Centre is a reconstruction of a lochside dwelling over 2,500 years old and was built by the Scottish Trust for Underwater Archaeology (STUA) withthe support of many individuals and sponsorship from many organisations. 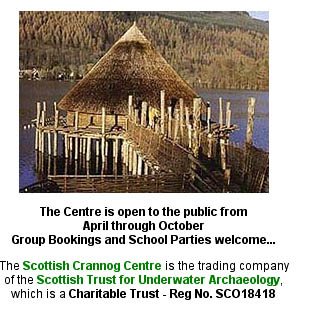 The Eagle Stone, Strathpeffer, and the boys from Class 7, Fodderty Primary School, who took the photographs, Mark Coupland, Michael Bartlett and Heather Maclennan.

This Pictish symbol stone, known also as the stone of the turning, dates from before the 7th century. Carved on the stone are two designs: an elaborate arch and an eagle. It is possible that the stone served as a record of marriage or a territorial marker.

The stone has been moved from a previous lower site and legend has it that it marks the graves of Munro clansmen killed in battle in the 15th century. In the 17th century, the Brahan Seer prophesied that if the Eaglestone fell three times ships would sail up the valley and moor at the stone; the Eaglestone has already fallen twice and is now set in concrete.

The Eaglestone is situated on the easterly edge of the village of Strathpeffer, reached by a footpath from the A834. 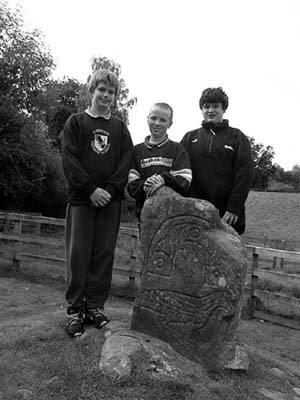