The contribution of Olaf and Hester Macleod to the cultural life of Ross and Cromarty was brought to mind when, in August 2019, Ross and Cromarty Heritage Society received an email from Alberto Rubio Diaz, owner of a house which he now runs as an hotel in Minas de Riotinto, Andalucia, Spain.

Alberto wrote that houses had been built in 1883 in an area known as “Bellavista” and were occupied by employees who worked in the mines owned by the British firm Riotinto Company Limited. The British company worked the mines until they were sold to a Spanish company in 1954.

Lucy Adela Hester Keithly-Peach (later Hester Macleod) was born in the town in 1913 and lived with her parents and sister in this Riotinto house from 1917 to 1940 as her father was an employee of the company. 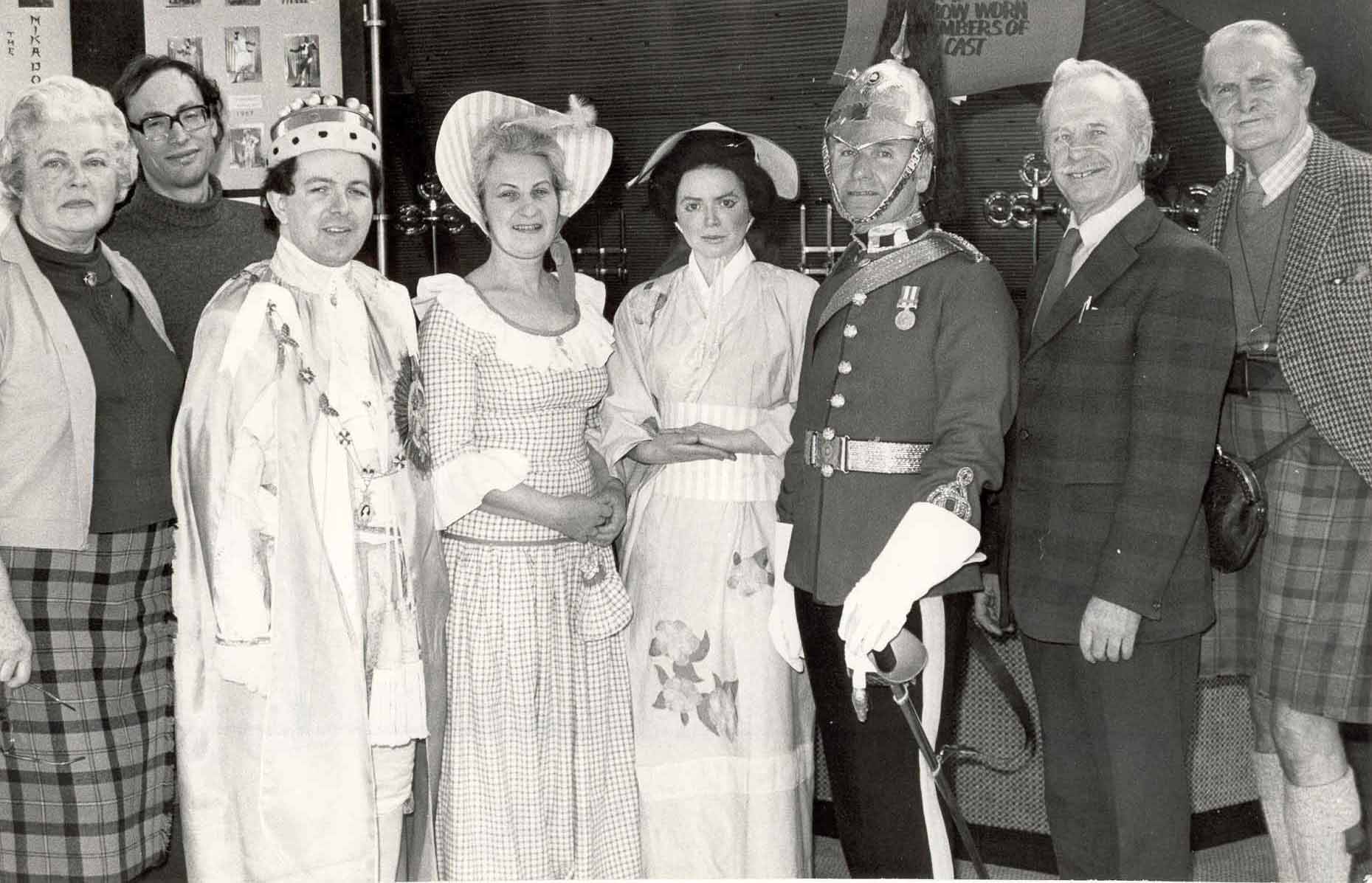 Alberto explained that he is doing research into the British families who lived in the house since its construction, with the objective of obtaining photographs of these people to frame them in the hotel in order that visitors might learn of the British background. Added to this he intends to write a book telling the story of the house and the United Kingdom through the stories of these families.

Through the Internet Alberto had found Hester’s connection with the Strathpeffer Amateur Operatic Society (SAOS) and was seeking photographs and information on Hester’s life during her years with the society. The only photograph he found of Hester (and Olaf) was the one which appears opposite.

The first problem was that many of those who participated in the performances had passed away, while age-related problems affected others. There was a distinct lack of photographs of both Olaf and Hester Macleod which leads to the conclusion that the couple did not court publicity for themselves.

Research by Ian Macleod of Dingwall Museum eventually produced a photograph of Hester.

Olaf Macleod died in Raigmore Hospital, Inverness, on 12 July 1986 and was interred in Urray West burial ground. His obituary in the Ross-shire Journal reads as follows:

In his work with the North of Scotland Hydro-Electric Board, with his interest in culture and the arts, with his distinguished military career, Lieutenant Colonel Olaf Macleod, who passed away in Raigmore Hospital, Inverness, was known far and wide throughout the Highlands and much farther afield for that matter.

The Colonel resided with his wife, Hester, at Gorsehill, Jamestown, on retiring to Strathpeffer after a lifetime abroad, and took an active part in community life. 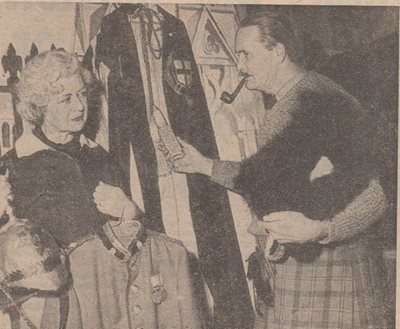 Born in India, Colonel Macleod was a cousin of Lord George Macleod of Fuinary, and a distant relative of the late Dame Flora Macleod of Macleod, Dunvegan Castle, Skye.

He followed his father and grandfather into the Army, gaining an Indian Army cadetship to Sandhurst in 1927, and was commissioned the following year, becoming a Second Lieutenant in Coke’s Rifles, 13th Frontier Force. In 1938 he was posted to the Staff College at Quetta and retired from the Army in 1947. He married in 1930 [newspaper print indistinct; could be 1939] and he and his wife spent part of their honeymoon at Dunvegan Castle.

On retirement, the Colonel joined the Hydro Board as wayleave officer and negotiated many of the wayleaves for Board developments throughout the Highlands.

His artistic talents were employed in painting scenery and designing costumes for the Strathpeffer Operatic Society, and graphically illustrating military uniforms for the regimental museum at Fort George. Examples of his work are now being compiled as a book.

Deepest sympathy is extended to Mrs Macleod whose regal bearing and magnificent voice lent much to the success of the company they were instrumental in forming.

Hester Macleod died in Raigmore Hospital, Inverness, on 20 November 1989, and the intimation and obituary were also recorded in the Ross-shire Journal at that time. It is somewhat ironic that most of her obituary is devoted to Olaf’s achievements and no mention is included of her time at the Royal College of Music, London, where she trained as an opera singer.

With her husband, Lt. Colonel Olaf Macleod, she added much to the cultural life of the Ross-shire community in which they had settled many years ago.

Until his retirement Colonel Macleod had held an appointment with the North of Scotland Hydro Electric Board which took him far and wide throughout the North. Previously he had served with Coke’s Rifles, Frontier Force, Indian Army, with much distinction. For many years he specialised in the intricacies of military uniforms, with collectors all over the world appreciating his military models and pictures and paintings which regularly featured in the programme for the Military Tattoo at the Edinburgh Festival.

For many years Olaf Macleod had painstakingly researched the history of uniforms and just before his death three years ago had produced a fine memorial to the great days of full dress uniforms in the British Army. Unfortunately, he died before the book Their Glory shall not be blotted out was published, and it has become a fitting memorial to him. 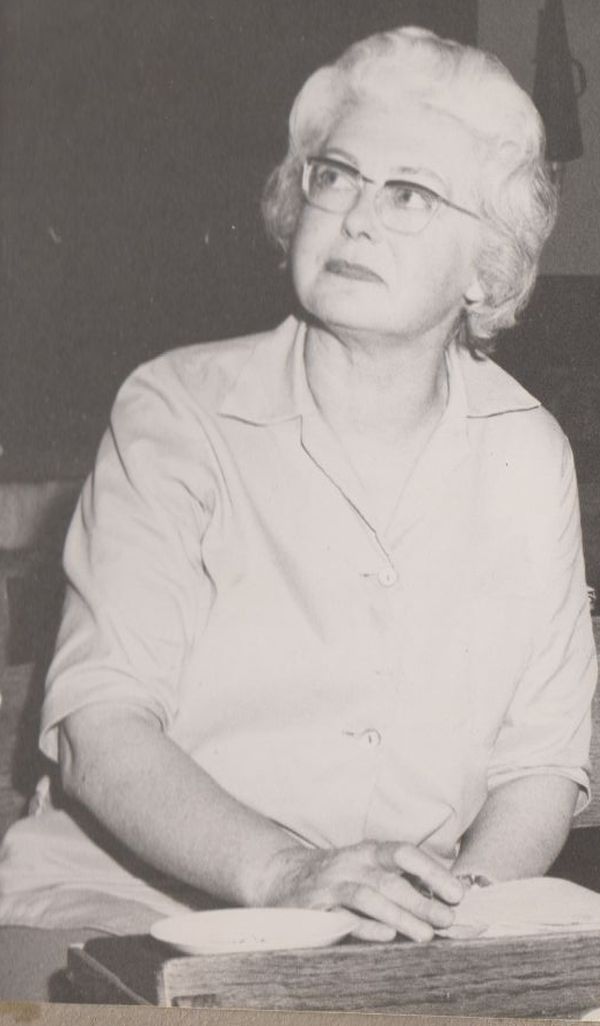 Through meticulous and beautiful paintings he created a permanent record of the ceremony, grace and dignity of the last of the British Army full dress, now only used in a military tattoo and other ceremonial.

The Colonel was one half of a glorious partnership which led to the forming of the Strathpeffer Amateur Operatic Society, a group which set a standard which was very high and revived interest in the Gilbert and Sullivan Savoy Theatre operas.

The Colonel’s organising ability, his artistic bent and concentration on detail produced the most authentic settings for the operas which attracted full houses at every performance. He himself took part in many of the productions, but he was largely the planner, the designer. The producer par-excellence, the other half of the partnership was Hester Macleod whose commanding stage presence and magnificent bearing had the hallmarks of her training as an actress, possessed of a beautiful singing voice. One has fragrant memories of the her performances on the Town Hall stage in Dingwall.

Although the company specialised in Gilbert and Sullivan, the Strathpeffer Opera were prepared to venture into other realms of light opera, and right successfully these proved too.

The Macleods introduced many local residents into the magic world of opera, motivating many who never dreamed that they had so many hidden talents. Yes, in their own small way Olaf and Hester Macleod contributed a great deal to the cultural life of Ross-shire, and set alight that interest in other communities.

In Church life, both played a very active part in the affairs of Fodderty and Strathpeffer Parish Church, the Colonel as Session Clerk.

The following tribute has been received from Ross and Cromarty District Office, WRVS, with which Mrs Macleod was involved.

“The Women’s Royal Voluntary Service in Ross and Cromarty would like to add their tribute to the late Mrs Hester Macleod who died on 20th November. Hester was our organiser in Strathpeffer and Contin for many years and was always a willing helper with the variety of jobs that WRVS members are requested to take on. She had the flair to make any emergency exercise seem like the real thing, with her very talented acting ability. She will be greatly missed in the community.”

The funeral service in Fodderty and Strathpeffer Church of Scotland was conducted by the Minister, Rev. John Buchanan, and interment followed in Urray churchyard.