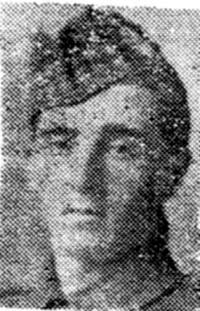 There is reproduced today a photograph of 203261 Pte. Robert Munro, Seaforths, who was wounded on 2nd August and died of wounds in France on 13th August 1917. Deceased was the only son of Mr and Mrs Robert Munro, New House, Heights of Inchvannie, Strathpeffer, and was only 21 years of age. He was called to the colours in January of this year, and joined the B.E.F. on May 10th. Before joining up he was engaged on the farm along with his father. A fine, strapping, well-set up lad, he made a splendid soldier, as he was a typical Highlander. Cheery, bright, and agreeable, he was a great favourite at home and a great favourite in the battalion. A dutiful son and a loving brother, his loss is sorely felt in the family circle, with which the whole community is in sympathy.
Deceased is buried in a soldiers’ cemetery in Flanders. 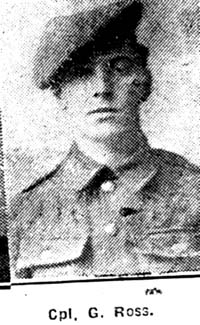 Sergeant George Ross, Royal Engineers, eldest son of Mr and Mrs G Ross, Kinettas Cottage, Strathpeffer, has been officially reported wounded and missing on 26 March. He was seen to fall twice, the second time he was not able to get up and our troops retired. It is hoped that he is a prisoner.

Sergeant Ross has been out since the beginning of the war and previous to joining up was a plumber with R Mackenzie, Dingwall.

Another brother, Private Walter Ross, 1/4th Seaforths, ghas been unofficially reported missing since 27 March. He is only 19 years of age. Prior to enlisting he was a baker with Messrs Burnett Bros., Strathpeffer.

Another brother, Private John Ross, Seaforths, has served in France since the commencement of the war but so far is quite safe. In civilian life he was employed as a joiner with Mr Ross, Strathpeffer.

See entries below for his brothers Walter and John Ross
RCHS Note: RCHS was contacted in May 2018 by the great-niece of George and John who added that George Ross, MM, was killed in action on 26 April 1918 while John Ross survived the War, returned to Strathpeffer, but emigrated to Wisconsin with his family.

Mr and Mrs G Ross, Kinettas Cottage, Strathpeffer, have received a postcard on 5 June from their younger son, Private Walter Ross, Seaforths, missing since 22 March, stating that he is quite well and interned in Holland. The postcard was written by Private Ross on 25 April. So far no news has been received of their eldest son, Sergeant George Ross, Royal Engineers, who has been missing since 25 March, but hopes are entertained that he is a prisoner. 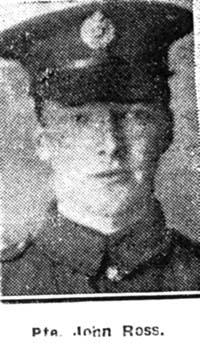 There is reproduced today a photo of Sergeant John Ross, Seaforths, who was recently home on leave at Muir of Conon, where his wife resides. Sergeant Ross joined 4th Seaforths in 1912 and mobilised with the battalion in August 1914, and proceeded to Bedford on 15 August.

In November 1914 he was promoted Sergeant and retained for special training purposes. In April 1916 he was posted to France, reverting to Private but subsequently received back his stripes. He served throughout the remainder of 1916 and throughout 1917. Time-expired in December, his leave was deferred until May last, on the expiry of which he returned to the line. Sergeant Ross passed unscathed through the agony of the first days of the German offensive and was with his battalion in the heroic stand when by its gallantry it saved the flank of a neighbouring division and was specially mentioned for its great work. He shared in subsequent fighting before coming home. Sergeant Ross is a popular personality in the battalion. A native of Jamestown, Ross-shire, he has a croft at Muir of Conon which, after war, let it be hoped, will swell into a farm worthy of his record and sacrifice. Sergeant Ross is 34 years of age. 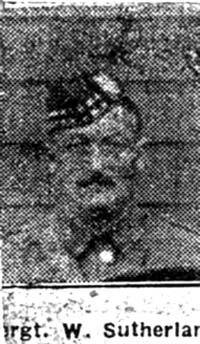 There is reproduced today a photograph of the late Sergt. William Sutherland, Seaforths, the last surviving son of Mrs Sutherland, Slaggan, Strathpeffer, who, as already reported, was killed in action on September 20th in the great push.

Sergt. Wm. Sutherland is well remembered in the civil life of Dingwall. As a lad he entered the employment of Messrs D. Mackintosh & Coy., of Dingwall Ltd., and was 21 years in the service of the firm. An able and competent auctioneer, he was also a splendid organiser and outside agent. His duties brought him into contact with a very large number of people, and he was widely travelled in rural Ross, East and West, enjoying everywhere complete confidence and the heartiest esteem. He shared largely in the building up of the wide business of his firm and, incidentally, in the building up of Dingwall as a great centre of livestock sales. He had a hearty, happy smile for all, and a genial, pleasant manner, while his business probity remained unquestioned, and his word was his bond, secure and inviolate.

Deceased was 39 years of age, and joined up early in 1915 before the Derby scheme. A Territorial, he was widely knows as a Sergeant in Brahan Company. He was trained with the second line, and subsequently with the Reserve Battalion. He had been in France for sixteen months, and had seen much service in the time. An athlete of distinction at home, a capital heavy-weight, he was the organiser and trainer of battalion sports behind the lines. Many will remember him in the old pre-war days, particularly at Strathpeffer Highland Gathering, where he shared in the local events, and was a powerful leader in tug-of-war teams. Always a genuine sportsman, he trained for events, did his best to win, but took results with the best of spirit, whatever these might be.

Deep sympathy goes out to the mother and to two sisters who survive deceased.

Captain Ray Macdonald (Dingwall), in a letter to Mrs Sutherland, says: “On behalf of my company, men and officers, I wish to express to you how grieved we are to have lost your son, Sergt. Wm. Sutherland. We offer you our most sincere sympathy. Willie was killed on the morning of the 20th September. The fighting was of the fiercest, and he was advancing with his platoon towards his objective when part of a bomb hit him in the forehead, killing him instantaneously. His officer, Mr Clark, was killed a few yards to his right, and his old platoon commander, Mr Mackenzie, a short distance in front of him. Many a brave man fell round that spot, where the heaviest fighting of the whole front took place, and it was only by the fine example and bravery of men like your son that the stubborn resistance of the enemy was overcome. Willie is buried in a little British cemetery within the ground that he helped to win and paid so dearly for. He lies beside several others of his comrades. Your son was not only one of the mainstays of my company, but also the most popular N.C.O. in the whole battalion. Especially was he to the fore in organising sports, and he always coached the battalion tug-of-war team.” 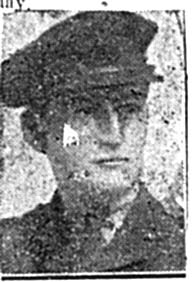 Lieut. Ronald Ross Alexander, R.F.A., who has been awarded the Military Cross, is the surviving son of Mr and Mrs J. H. Alexander, Edwinton, Broughty Ferry. Lieut. Alexander received his commission at the outbreak of war when he was aged 19, and went to France in May He is an old Glasgow Academy boy.