History of the Old Station

History of the Old Station, Strathpeffer

Highland Railways Company had proposed that the line from Dingwall to Kyle of Lochalsh should pass through Strathpeffer but, due to objections from a local landowner, Sir William Mackenzie of Coul, the line ran to nearby Achterneed and so, from 1870 when a station opened there, visitors to Strathpeffer had to travel two miles by horse and trap from Achterneed to the Spa village. 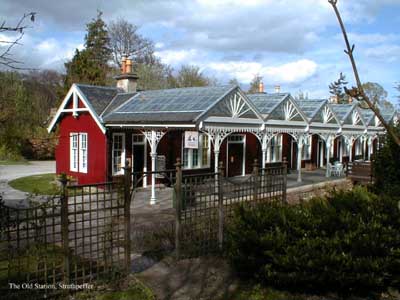 In 1897 the Highland Railway Company ran five trains a day on the branch line from Dingwall to Strathpeffer [see The Peffery Way]. The first train, at 7.40 am, was a mixed/mail passenger train. The journey took ten minutes.

After the death of Sir William these objections were removed and the ever-increasing popularity of the Spa meant an alternative site for a station was sought. The Station in its present central position in the village was built for the Highland Railway and opened in 1885, when the old station was renamed Achterneed. Until the first World War Strathpeffer Station served visitors to the popular holiday village in the heyday of the “Strathpeffer Spa Express”, but wartime occupation of the hotels and changes in travel habits meant that Strathpfeffer never fully regained its former glory. Mounting debts and lack of patronage brought about the closure to passengers in 1946 and to freight in March 1951. The Old Station was renovated in 1986 and now houses the Highland Museum of Childhood and various other craft outlets. 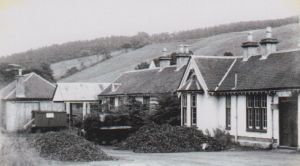 Timeline of the Station

The Highland Museum of Childhood has produced a timeline of the station based on photographs, archives and memories, and the information below is quoted courtesy of their leaflet The Old Station Strathpeffer.

1884-1914 The Station’s Heyday
The branch line and station were built in 1884, opening June 1885. Murdoch Paterson, well-known architect and civil engineer was responsible for the design. The building included a stationmaster’s office, ticket office, waiting room, and offices/stores.

1914-1918 World War I The station was in use for wartime activity including bringing casualties by train to one of the four US Navy hospitals in the village (see Strathpeffer home page).

1918-1940 The Decline of the Station
The Highland Railway was absorbed into London, Midland and Scottish (LMS) Railways in 1923. In the 1930s a platform was built at the east end extending away friom the tracks towards the Goods Shed.

1951-1980 After Railway Closure
After closure the station became mainly a coal depot until the early 1970s (see photo above). There was also an upholsterer’s workshop in the building.

1990-2016
The Highland Museum of Childhood was established. The cafê continued to be popular. The basement under the entire station was filled in. Gents and Ladies toilets were available. Renovations took place in 1980 and the Goods Shed was built in 2010. The latter is an educational unit established by the Museum of Childhood.