On Friday 23rd and Saturday 24th April, 1982, the Strathpeffer Amateur Operatic Society gave their last performances. The chosen opera was Offenbach’s ‘La Vie Parisienne’ and, by all accounts, it was an astounding finale. 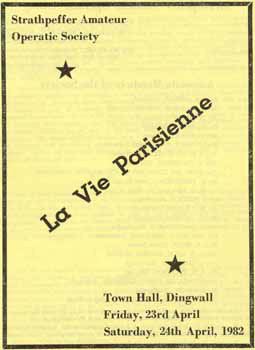 A Touch of Paris in Dingwall

The Strathpeffer Amateur Operatic Society added the French composer Jacques Offenbach to their impressive production list which extends over a period of twenty-three years from “The Mikado”, which they presented in 1959. In the early days, the Society had a leaning towards Gilbert and Sullivan, but since 1972 they have widened their scope with the most satisfactory of results.

Offenbach’s “La Vie Parisienne”, which was presented in Dingwall Town Hall, was an admirable choice, providing as it did sparkling music with grant opportunities for solo, duet, trio, quartet and choral work, to which the Society rose admirably producing the most exquisite of sounds and capturing the atmosphere the composer was endeavouring to create, of Paris of the late nineteenth century.

Strathpeffer is fortunate that it has in its number members who can both sing and act so well, bringing characters so vividly to life.

What a command of talent there is in their midst, and with new members coming forward the future of the company seems set fair. One was highly impressed by the performances of those who played the leading roles, especially the ladies. There were polished performances all round, so delightful to the ear and to the eye.

One congratulates the Society on introducing youngsters to the stage for it is on the young that such bodies depend for their future existence. There is plenty talent in the are if only it could be tapped, and encouraged.

In these days when the ear is “rattled” by mediocre performances on tape and record, when words and music seem of little consequence, you are maintaining your record for productions of a high standard, where every word is intelligible, the voice so mellifluous, and the music the essence of sweetness and lightness to the ear.

The combination of singers and orchestra was once again excellent, for which credit must go to the musical directors Fred Henson (conductor), Esther Jones and Isla Tait.

Evelyn Wilkie, an actress and producer of note with Dingwall Players in the fifties, and Irene Brown, who played many leading roles in Strathpeffer productions, were the perfect match, bringing acting and musical expertise to the production of a most enjoyable show.

The beautiful dresses worn by members of the Strathpeffer Amateur Operatic Society in their recent presentation of “La Vie Parisienne” will be worn again during Strathpeffer Victorian Day in June.

This must come as good news for local people who found them such a delight in the sparkling production staged in Dingwall Town Hall, for the costumes, which were mostly made by the members themselves, are well worth a second look.

The Society, which hopes to celebrate its Silver Jubilee next year, can be justly proud of this year’s production, which captured the full magic of life in Paris in the 1860s, and it is a sad reflection on local apathy that audiences for the two nights amounted to a mere 350 persons!

It has long been the Society’s policy to encourage young talent whenever possible. This year, Dingwall Academy was represented by three young can-can dancers – Anne Fisher, Suzanne Mathis and Jane Russell; also by three young men who acted and danced with great aplomb – Alistair Cooke, Gareth Laing and Alistair McDonald.

Even before the opening curtain rose, the mood was set by the lively overture arranged and conducted by Mr Fred Henson, again with some promising new talent provided by horn player Wendy Milne of Fearn and double bass James McDonald of Fortrose.

Mr Henson later told the “North Star”, “We are much indebted to the schools’ music departments for this promising new talent which echoes the expertise of the tutors.”
This year marked a break away from the Gilbert and Sullivan productions for which the society has become well known, for “La Vie Parisienne” has music composed by Jacques Offenbach.

The three acts were presented with considerable polish and, apart from a bit of prompting now and again, the entire show went with a magnificent swing, which is a credit to the entire production team and orchestra.

This year the society has a new patron, Vice-Admiral Sir John Hayes, KCB, OBE. The president is the Earl of Cromartie, MC, TD, who has supported the group for the past 24 years.

In view of this year’s excellent production, it will be interesting to see just what the Society will pull out of the bag to mark next year’s Silver Jubilee.