A visit to the last remaining pump room of the former Spa complex at Strathpeffer gives an idea of the procedures endured by those who came to “take the waters” at the beginning of the 20th century. Unfortunately, 21st century health and safety regulations no longer permit sampling of the contents of the sulphur or iron wells lying deep underground.

However, we can meet some of the characters who visited the Spa or meted out treatments.

Dr Fortescue Fox was an expert Victorian Physician who came to Strathpeffer where he developed an interest in Medical Hydrology. This field of medicine involved using the climate and waters.

In November 2019 RCHS was contacted by Dr Robin Fox, a grandson of Dr Fortescue Fox, as he is writing an article for a medical journal about his forebear, and has given additional information as follows:

“My grandfather moved from London partly for his health, and Strathpeffer was clearly good for him. He was soon married to a daughter of the Rev W S McDougall, Free Church minister of Jamestown, and living in a fine house where the family was awoken by a piper. He wrote “Strathpeffer Spa: its waters and climate”. During his time as medical superintendent the Spa expanded considerably. On returning to London he became something of a pioneer in Rheumatology and rehabilitation.”

Visitors to Strathpeffer came via the Highland Railway Company which opened its branch line to the village on 3 June 1885. Until then, visitors made the final stage of their journey by horse-drawn coach, which was both inconvenient and not very suitable for the many guests who were older, in poor health or invalids. In the first decade of the 20th century the Spa was overflowing with visitors and the Railway Company built their grand 90-bedroom Highland Hotel, which opened in 1911. 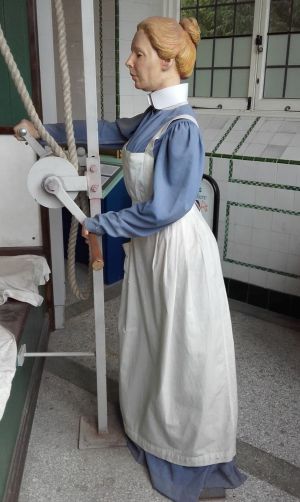 Meet the characters in the pump room and explore the treatments