This community is located on the Black Isle. It is a rural area. So, much of the area is dominated by agriculture. However, there are some small villages in the area including Mulbuie, Alcaig and Culbokie. Therefore, there are only approximately 2000 residents in the area.

As a result of its location it is a very beautiful area. For example one of the most spectacular views is across the firth to the Ben Wyvis massif and the county town of Dingwall. In addition there is the natural amphitheatre of the Burn of Ferintosh. During the 18th and 19th centuries this burn was the location of huge outdoor communion services. However, these ended in the late 1990s.

One of the most famous people from the area is Major General Sir Hector Macdonald. He was born in Mulbuie in the mid 19th century and became a war hero. In addition to a memorial in Mulbuie there is also a 100ft memorial in Dingwall. 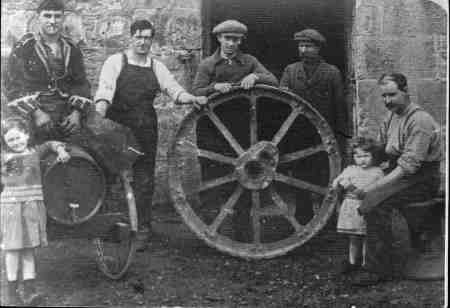 This photograph shows the doorway of the Culbokie Smiddy, c. 1925. The little girl is Jessie MacDonald with William Macdonald.    Attribution: unknown

Further information on the history and heritage of the area can be found by following the link below to another Ferintosh community website.

In order to visit this community site click on either the name of the site or the image in the link below. If this external link does not work please let Ross and Cromarty Heritage know, so that the missing external links can be repaired.