The article which follows is reproduced from the September 2019 edition of The Record, the monthly publication of the Free Church of Scotland, by permission of the Editor. 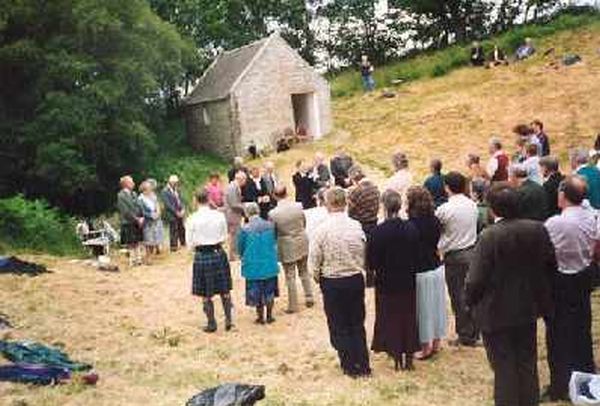 The Burn of Ferintosh is an important location in the spiritual history of the Highlands, and has also played a significant role in the history of the Free Church. It lies between Alcaig and tne Cromarty Bridge, by the New Urquhart Cemetery.

The natural amphitheatre was used during the 18th and 19th Centuries for huge annual communion services, for which people travelled up to 50 miles to attend.

The parish minister from 1813 was Rev. Dr John Macdonald, later known as The Apostle of the North. Dr Macdonald spent some of 1842 and 1843 travelling the Highlands, informing the people of the stand he and others intended to take at the forthcoming Church of Scotland General Assembly. After speaking he would ask people to sign their agreement to what was planned, and in this way gathered a great deal of support from the people of the Highlands.

The first Sunday after the Disruption Assembly, when 450 ministers left to form the Free Church of Scotland, Dr Macdonald preached at the Burn. His Gaelic text that day was Galatians 5 v1: For freedom Christ has set us free; stand firm therefore, and do not submit again to a yoke of slavery. He continued to preach at the Burn of Ferintosh until a new church was built for the congregation.

Outdoor Gaelic communions were held at the Burn until the 1950s, and Urquhart (Ferintosh) and Resolis Free Church still hold summer services there.

William Laidlaw, poet and assistant to Sir Walter Scott, writes of a communion service at the Burn:
“We set out on Sabbath to the communion at Ferintosh, near Dingwall, to which the people resort from fifty miles distant. Dr Macdonald, the minister, who attracts this concourse of persons, was the son of a weaver in Caithness (but from the Celtic population of the mountains there). He preached the sermon in the church in English, with a command of language, and a justness of tone, action, and reasoning – keeping close to the pure metaphysics of Calvin – that I have seldom, if ever, heard surpassed. He had great energy on all points, but it never touched on extravagance.

“The Gaelic congregation sat in a dell of a long, hollow, oval shape bordered with hazel, birch and wild roses. It seemed to be formed for the purpose. We walked around the outside of the congregated thousands and looked down on the glen from the upper end, and the scene was really indescribable. 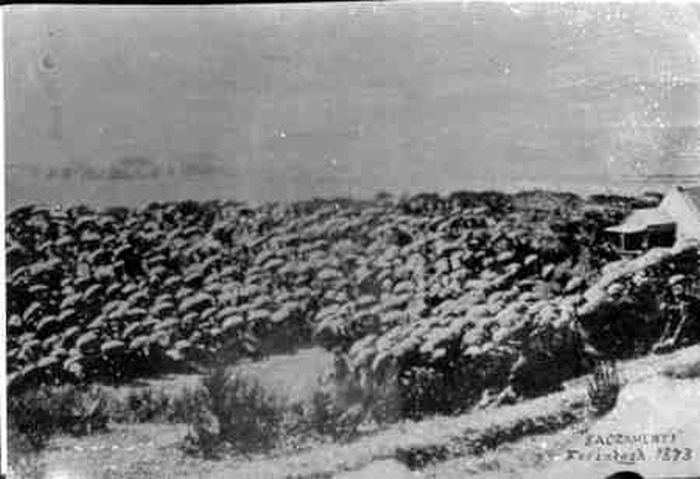 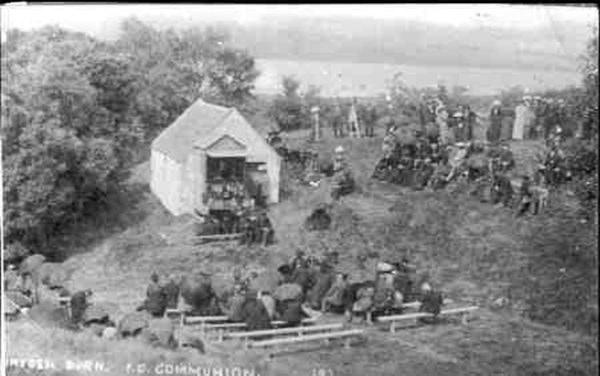 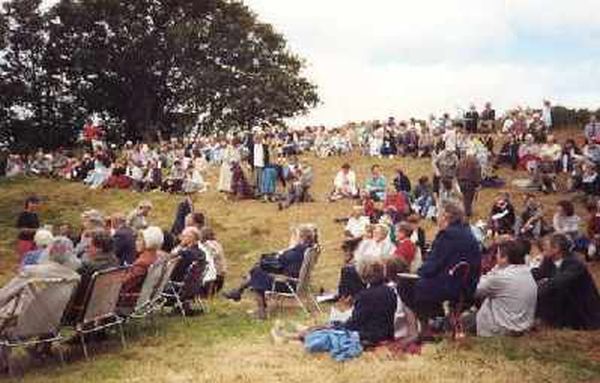 “Two-thirds of those present were women, dressed mostly in large, high, wide, muslin caps, the back part standing up like the head of a paper kite, and ornamented with ribbons. They had wrapped around them bright coloured plaid shawls, the predominant hue being scarlet. It was a warm breezy day, one of the most glorious in June. The place will be about half a mile from the Firth, on the south side, and at an elevation of five hundred feet. Dingwall was just obvious at the foot of Ben Wyvis, still spotted with wreaths of snow. Over the town, with its modern castle, its church, and Lombardy poplars, we saw the richly cultivated valley of Strathpeffer.

“The tufted rocks and woods of Brahan were a few miles to the south, and fields of wheat and potatoes, separated by hedgerows of trees, intervened. Farther off, the high peaked mountains that divide the county of Inverness from Ross-shire towered in the distance. I never saw such a scene. We sat down on the brae among the people, the long white communion tables being conspicuous at the bottom. The congregation began singing the psalm to one of the old plaintive wild tunes that I am told are only sung in the Gaelic service. The people all sing, but in such an extended multitude they could not sing together. They chanted, as it were, in masses or large groups. I can compare the singing to nothing earthly, except it be imagining what would be the effect of a gigantic and tremendous Aeolian harp, with hundreds of strings! There was no resisting the impression. After coming a little to myself I went and paced the length and breadth of the amphitheatre, taking averages and carefully noting, as well as I could, how the people were sitting together, and I could not in this way make less than nine thousand five hundred, besides those in the church, amounting, perhaps, to one thousand five hundred.

“Most of the gentlemen of the neighbourhood, with their families, were there. I enjoyed the scene as something perfect in its way, and of rare beauty and excellence.”

For more on The Burn era, see The Apostle of the North by Rev. J Kennedy.