The original jetty in Inverasdale was built approximately 150 years ago and was used by local fishermen to land their catch when fishing to sell and sustain their own families. Early in the 1900s Loch Ewe was a busy port to the old steam puffers which sailed up from Glasgow to bring supplies to the local merchants such as coal, wood, furniture and grocery supplies. The puffers would come into the loch every 10 days and local men would use an 18-foot rowing boat to go out to the puffer to transport their wares back to shore.

The old jetty is now rarely used, as it is not suitable or large enough for the uses of today’s sailor. Following a local study, the Loch Ewe Action Forum has raised sufficient funds through funding agencies to build a new slipway and car park and to improve the access road for all. It is anticipated that the work for this project will start in the late summer of 1999 and when complete, will provide a facility for local fishermen, tourists, and businessmen and for leisurely pursuits. It is also hoped, and the matter is being pursued, that the old jetty will continue to be maintained and may also be repaired to keep a part of history intact.

[Contributed by Claire Markey when a pupil at Inverasdale Primary School.] 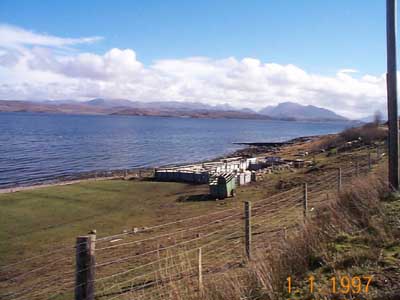 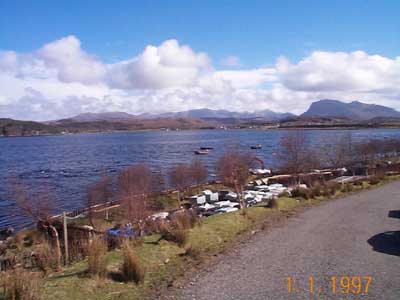 The bridge across the River Ewe in the centre of the village of Poolwe was constructed before the outbreak of World War Two. The views from either side are spectacular. On one side you can look up the River Ewe and on the other out to Loch Ewe and beyond.

[Contributed by Nicky Ella-Kirk when a pupil at Poolewe Primary School.] 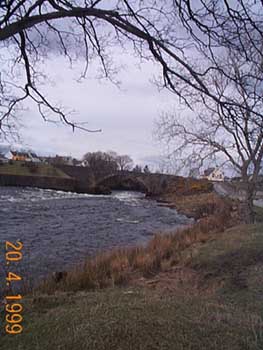 Visit the page on Inverewe Gardens to see some of the stunning flower displays and views from the gardens. 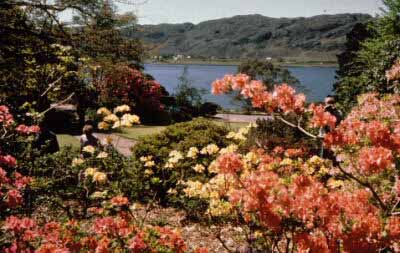