The Student and the Stone

Born Katherine Bell Matheson at Inverasdale, Gairloch, in 1928. She grew up on the banks of Loch Ewe and would have witnessed the Royal Navy vessels assembling to take part in the Arctic Convoys of WW2.
She moved to Glasgow to study Domestic Science and train as a Teacher in English & Gaelic. It was during this time that she met fellow students Ian Hamilton, Alan Stuart and Gavin Vernon at Glasgow University. It quickly became apparent that they had one similar interest in their passion for Scottish patriotism which led them to join the movement called “Covenant”, in favour of Home Rule.

On Christmas Day 1950 the four students removed the Stone of destiny from Westminster Abbey for return to Scotland. A major search for the stone was ordered by the British Government, but proved unsuccessful. The new custodians left the stone on the altar of Arbroath Abbey on 11 April 1951, in the safekeeping of the Church of Scotland.

The adventure that Christmas Day remained central to Ms Matheson’s life. Her pride in being Scottish was reflected in her thanks to the nation when the four were not arrested.

“It was the people of Scotland who saved us,” she said. “They made it abundantly clear that there would be riots if they attempted to prosecute us.”

She returned to and lived most of her life at Inverasdale, with her mother, where she taught domestic science at Achtercairn School. She continued with her political activity, playing a central role in the Ceartas (Gaelic for Justice) protest drawing attention to the unequal treatment of the Gaelic language and protested throughout Scotland by defacing road signs in the 1980s. She was also a close friend of Winnie Ewing, SNP MP for Highlands and Islands.

In 1996, in a symbolic response to growing dissatisfaction among Scots at the prevailing constitutional settlement, the British Government decided that the stone should be kept in Scotland when not in use at coronations and was returned in a handover ceremony at the border between representatives of the Home Office and of the Scottish Office. A few days later it arrived at Edinburgh castle where Prince Andrew, Duke of York, representing Queen Elizabeth II, formally handed over the Royal Warrant transferring the stone into the safekeeping of the Commissioners for the Regalia
It currently remains alongside the crown jewels of Scotland, in the Crown Room.
Kay Matheson died in 2013 at a care home on the shores of Loch Ewe, where she had spent the last 20 years.

Click here to find out more about the Stone of Destiny 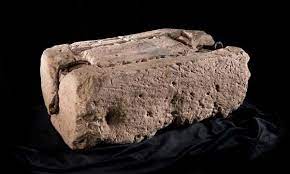