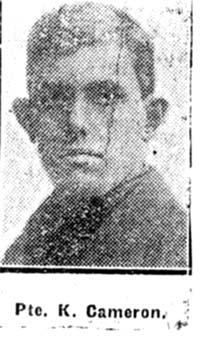 The death has occurred at Shieldaig, Strathcarron, of Pte. Kenneth Cameron, eldest son of Mr and Mrs Cameron. Deceased served for over a year with the Seaforth Highlanders, and was gassed early last winter. He was invalided home to England, where he remained some time in hospital. Soon afterwards he was discharged, his right arm being totally useless, and he also suffered from gas poisoning and trench shock. Great sympathy is extended to his parents, brothers, and sisters, in their sad bereavement. A photograph of deceased appears to-day. 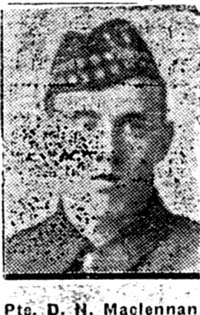 Shieldaig, Lochcarron, has lost many of her gallant sons in this war, and is now called on to mourn the loss of another. Mr and Mrs D. Maclennan recently received notice of the death on 18th April of their son, Private D. N. Maclennan. Private Maclennan, who was only twenty years of age, had served with the Seaforths for some time and fell fighting for King and Country. He was loved and respected by all around him, and much sympathy is extended to his sorrowing parents and brothers and sisters. A photograph appears today. 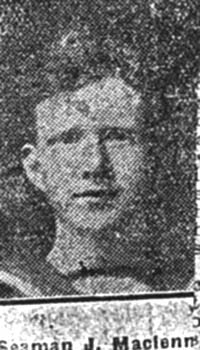 Seaman John Maclennan, whose photograph is reproduced above, was the son of Mr and Mrs Maclennan, Mary Street, Shieldaig, and who died of pneumonia at the Naval Hospital, Lerwick. The deceased, a promising young man of likeable disposition, was a great favourite with all who knew him, and before joining the Naval Service was a junior student in the Dingwall Academy, where he had a very successful career, and was highly esteemed by his teachers and school companions.

In the Navy he took, with some success, a course of signalling, and his examination officers, as well as his chaplain, ship officers and shipmates, wrote his parents sympathetic letters, all testifying to his keen abilities and exemplary character.