Lochcarron, formerly known as Janetown or Jeantown, consisted of a few houses until 1813 when it expanded due to the arrival of the Parliamentary road from Contin to Strome Ferry. The ferry operated for many years until it ceased in the latter part of the 20th century. 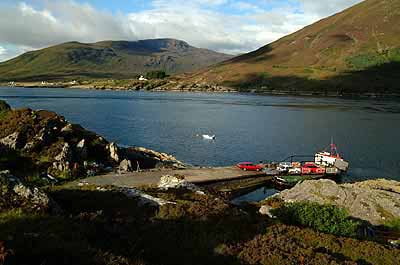 By 1897 the Dingwall to Skye Railway had reached Kyle of Lochalsh, with the final section, from Stromeferry to the terminus, taking more than four years to construct, owing to the difficult terrain through which it passed, requiring the construction of 29 bridges and more than 30 cuttings through solid rock.

The station consisted of a broad island platform on a pier adjacent to the water’s edge, plus station building, several sidings, signal box and small locomotive shed. The signal box closed in 1984 when electronic working was introduced but remains intact and has been adapted as a holiday cottage.

Until the early 1970s the station provided a connection to the ferry which crossed the Minch to Stornoway, until Ross and Cromarty County Council developed a new terminus at Ullapool, allowing a shorter crossing to Stornoway. Ferries also crossed from Kyle of Lochalsh to Skye until the opening of the Skye Bridge in October 1995 when they became redundant.