The handsome square cast iron memorial clock, known locally as the “Fowler Memorial Clock”, stands in Quay Street and is reputed to be the most photographed clock in the Highlands!

Erected in 1899 to the memory of Sir John Fowler of Braemore and his family, it originally stood in the middle of the road between the Caledonian Hotel and the corner of Quay Street and Argyle Street. Each of its four pedimented faces’ tympana is decorated with a crown and on top there is an urn whose leafy finial carries a weathervane. Sir John, the eminent engineer, and his family lived at Braemore House at Braemore junction near Corrieshalloch Gorge. He died in November 1898 and to quote the Inverness Courier obituary of November 25th 1898: “His life covered the greater part of the century and his name is associated with some of the greatest triumphs of modern engineering ….” He was born in 1817 in Ecclesfield, Sheffield, and by the age of 26 had commenced an independent career as chief engineer becoming responsible for, among others, The Oxford, Worcester and Wolverhampton Railway; the Severn Valley Railway, the mid-Kent Railway, Liverpool Central Station, the Northern and Western Railway of Ireland, the Railways of New South Wales and India, the Metropolitan Inner Circle Railway, the St. Johns Wood Railway, the Hammersmith Railway, the Highgate and Midland Railway, the Glasgow Union and City Railway and St. Enoch’s Station, and many others, most notably the Metropolitan (underground) railway. He was the main instigator of the project for the Garve and Ullapool Railway and he was responsible for the design of the Forth Railway Bridge. The bridge at Auchindrean opposite Lael forest walk is thought to be the first prototype for one of the spans for the Forth Railway Bridge.

At the base of the pedestal there are four inscriptions:
On the north plaque: This clock is erected by Sir Arthur Fowler’s friends in remembrance of his unfailing devotion to the interests and welfare to the people of Loch Broom.

On the west plaque: Also in memory of Sir John Edward Fowler 3rd Baronet of Braemore. Captain 2nd Battalion Seaforth Highlanders. Adjutant of the 4th Battalion Seaforth Highlanders. Born at Inverbroom, Lochbroom on 21st April 1885. Killed by shellfire in the trenches at Richebourg L’Avoue in France 22nd June 1915. He was mentioned in despatches. His Brigadier General writes: “He was one of the very best young officers I ever met and an example to all others.” One of his non-commissioned officers wrote “He endeared himself to all whether under him or over him. He was the guide, adviser and helpmate of every individual in the Battalion.”

On the east plaque: Also in memory of Sir Arthur Fowler’s second son Captain Alan Fowler, 2nd Battalion Queen’s Own Cameron Highlanders. Born at Inverbroom, Lochbroom on 27th February 1887. Killed while commanding a company in the front trench of Hill 60 in Flanders on 28th April 1915. His Colonel wrote: “He died a soldier’s death today, when holding a trench in a difficult and important position. I cannot speak too highly of the truly gallant way in which he has behaved.” His General wrote of him: “He was a first rate soldier, a good comrade, popular with officers and men alike.” 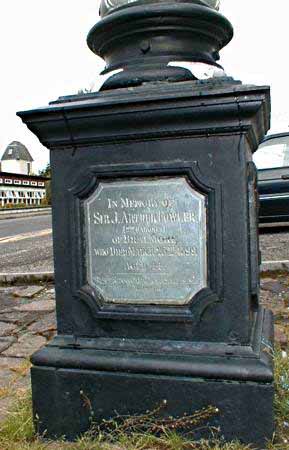 The clock was presented to the village in 1922 by the Fowler family with £100 to invest for maintenance. The clock was moved to its present position in the mid-1960s when the then District Council complained of traffic congestion. Thc clock was wound by hand until 1995 – custodian was local butcher Sandy Ross – when the current Lochbroom Community Council undertook a fundraising exercise to raise money for its electrification and this was achieved with the help of a Highland Regional Council grant, help from Scottish Hydro Electric and with local workmen offering their services free of charge. Donations were made by a number of local organisations and people. The clock now keeps excellent time. Thc next stage is to get a solar unit fitted so the lamps can be lit at night and an application has been made recently for grant assistance for a link chain fence with bollards to be placed around the clock to replace the present rocks which were positioned to prevent cars parking too close – an Italian camper van one year parked under the north facing arm and broke it off!

Although the clock has been officially handed over to Ross & Cromarty District Council it is very much the “baby” of the present Community Council who arrange for all the necessary work to be done including painting and upkeep and any repairs that are necessary.