In 2016, after two years of dedicated work by the people of Gairloch, a once-overgrown roadside verge became a community garden.

The area had been covered in gorse bushes almost eight feet high before a local retired couple cleared a 2-yard section to reveal a beautiful view. The gorse was cleared by the council but there remained general waste which had accumulated in the undergrowth over many years.

Fund-raising began through the Shop at the Pier, aided by the Wester Ross Environmental Network, and this resulted in donations of benches, tubs and planters, plus plants.

By March of 2016 the project attracted BBC’s Beechgrove Garden whose researchers were particularly impressed by the fact that every item of garden furniture, tubs, and even compost, had been donated. This led to inclusion in an episode of the programme. 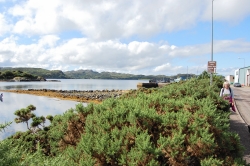 The area before ….      Attribution: courtesy of the Editor of The Ross-shire Journal

Throughout the project local businesses were equally supportive, with builders, a nursery, accountants, stores, and Gairloch Estate, all contributing goods and services. A local artist crafted an eye-catching ‘Welcome’ sign, while other decorative ornaments have also been contributed. Two holidaymakers from the central belt observed the work that was continuing and returned some months later with the equivalent of 12 bags of topsoil !

A suggestion by a local wildlife enthusiast resulted in 11 pairs of binoculars being donated within 24 hours.

Information and photographs above are courtesy of the Editor of The Ross-shire Journal. 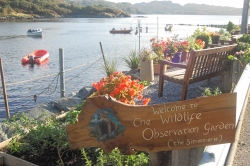 ….and after.          Attribution: courtesy of the Editor of The Ross-shire Journal

Moving on to November 2018, the press has reported the formal assessment of It’s Your Neighbourhood scheme of Keep Scotland Beautiful. The assessment reads: When rampant gorse bushes were cleared away revealing the stunning view, local people began to think that a bench would be an asset. From that first bench, residents have taken the area into their hearts and it is now tranformed into a delightful observation and relaxation space. To do this without paid staff is commendable.

In the same month it was revealed that WoodblocX of Dingwall had donated a large octagonal planter for use in the planting of a new display of 3,000 spring bulbs. 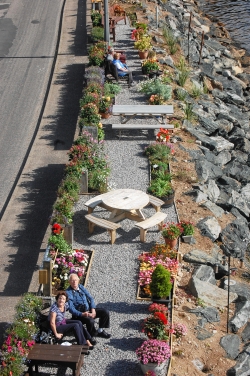