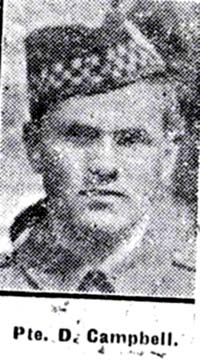 A photo appears to-day of Pte. Donald Campbell, Argyle and Sutherlands, son of Mr and Mrs Campbell, Polglass, Coigach who, as recently reported, was killed in action in the great offensive on April 2nd, 1918. He joined the Colours in June, 1916, and went to France in October following. Deceased was only 21 years of age. He was well liked by all who knew him. The deepest sympathy is extended to his parents, sisters, and brother.

The above is a portrait of Lance-Coporal A. Macleod, Seaforths, who won the DCM and in recognition of which he was, on 21st September, presented by the inhabitants of Coigach with a double gold albert with pendant replica of his medal bearing the following inscription:
Presented to Lance-Corporal A. Macleod from the inhabitants of Coigach on the occasion of his winning the DCM in France, September 1916.

Corporal Macleod belongs to Polbain. He is 23 years of age, and has been in the Territorials since he was 18. Previous to the war he was for some time a motor car driver with Mr G. Morrison, Caledonian Hotel, Ullapool. 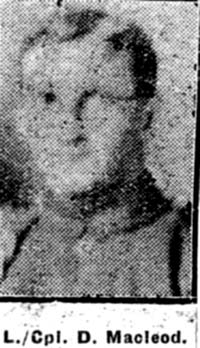 Mr Neil Macleod, Sea View Cottage, Polbain, Achiltibuie, as recently reported, has received official information that his son, Lce.-Cpl. Donald Macleod, Seaforths, is a prisoner of war in Germany. His photo appears today. Previous to the outbreak of war, L./Cpl. Macleod was employed in the Columba Hotel, Oban. On 4th August, 1914, he was called up as a Territorial, and mobilised with the 5th Seaforths. He went to Bedford, where he took ill, and went through a serious operation, with the result that in November 1915 he was discharged, being medically unfit. Returning home to Coigach, he resided with his parents. Recovering his health in his Highland home, he was called up on 20th June, 1917, and in December of same year was sent to France. L./Cpl. Macleod went through several engagements, including the offensive of the 21st March last, along with the famous 51st Division. Again in the thick of the fighting on the 9th April, on the 10th he was posted missing. The post card now received was posted in Germany on 11th April, and was received here by his father on 23rd May. L./Cpl. Macleod’s safety has been a relief to his people, and his many friends in a district where he is very popular hope that under the proposals for exchange of prisoners he may not be long in returning. He is a fine type of Highland soldier. 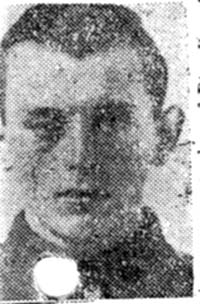 A photo appears today of Pte. Donald Macleod, Seaforths, whose family belongs to Coigach, Ross-shire, and whose father, Mr Murdo Macleod, resides at 149 Dumbarton Road, Glasgow. Wounded in the German offensive of March last, he has made a good recovery after five months’ hospital treatment, and is now with the 3rd (Reserve) Seaforths at Cromarty. When Pte. Macleod joined up he was working his uncle’s croft at Coigach. He has seen a good deal of the fighting. 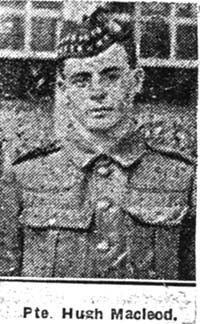 The above is a portrait of Private Hugh Macleod, Seaforths, killed on 6th September, and a son of Mr and Mrs Roderick Macleod, Achlochan, Coigach. He was 26 years of age. 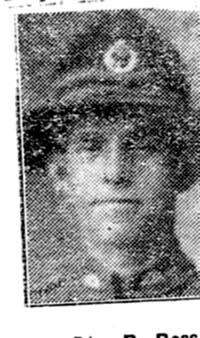 There appears to-day a photograph of the late Pte. Roderick Ross, New Zealanders, son of Mrs Ross, Reef, Achiltibuie, Ross-shire, who, as recently reported, died of wounds in a London hospital on December 20, 1917. Deceased was 32 years of age. Six years ago he joined his brother in New Zealand, and farmed there. In May, 1916, Pte. Ross joined the New Zealand contingent, and came over to this country, proceeding later on to the Western front. He was wounded in action on October 4, and for a time hope was entertained that he might recover. Deceased was a fine, manly type of Highlander, who unselfishly answered his country’s call, and gave to her the best he had in the field of battle.

Deep sympathy is felt with the mother.