The photograph of Gruinard island at first glance shows yet another beautiful Scottish setting but its history is embroiled in a dark part of UK history.

The island lies midway between Gairloch and Ullapool and was unpopulated since the early 20th century but had occasional visits from explorers and fishermen. It was part of the Eilean Darach estate which was purchased by Rosalynd Maitland in 1926 and on her death passed to her niece Molly Dunphie and her husband, both of whom were friends of Winston Churchill.

By 1941, when Britain was suffering from attacks at home and defeats abroad, Winston Churchill directed the scientists of Porton Down, a secret laboratory in Wiltshire, towards developing a biological agent to thwart Germany’s plans. 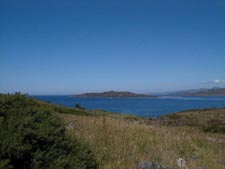 Research brought the development of a strain of anthrax, planned to be dropped over Europe in order to force German surrender.. But where to test it? Was it Churchill’s friendship with the Dunphies that resulted in the choice of Gruinard?

The MOD surveyed the island in 1942 and, later in the year, a group of scientists and military personnel began the task. Sheep were conveyed by boat and rowed to the island where they were contained within an exposure zone. Soldiers, in protective clothing and masks, loaded an “anthrax bomb” (gas canisters filled with spores) which was fired into the zone and subsequent “bombs” ensured the entire island was contaminated.. Within days all the sheep died and were incinerated on the island.

Fortunately, anthrax was never used in WW2 but the island remained contaminated, with signs on the mainland warning of the danger and forbidding entry, a situation which continued for many years as it was judged too dangerous and expensive to remove the hazard. 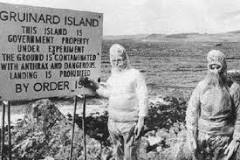 In 1986 decontamination began. The entire island was sprayed with 280 tonnes of formaldehyde diluted in sea water, and topsoil at the test site was removed. A flock of sheep placed on the island remained healthy. In 1990 a junior defence minister visited the island and declared it safe by having the warning signs removed. On 1 May 1990 the island was restored to heirs of the original owner for the original sale price of £500