Situated on the western side of Loch Ewe and adjacent to Poolewe, famed for the world-famous sub-tropical Inverewe Gardens developed by Osgood Mackenzie c. 1962. Poolewe was also the site of the Red Smiddy, the earliest iron blast furnace in Scotland which operated between 1610-1670 in the Loch Maree area.

Within the Gardens lies Inverewe House, built in 1862 by Osgood Mackenzie but destroyed by fire in 1914. The house was rebuilt by Osgood’s daughter, Mrs Mairi Sawyer, and was gifted by her to The National Trust for Scotland around 1952. In 2016 the National Trust announced plans to improve and extend the facilities within Inverewe House. A Visitors’ Centre was built in the Gardens in 1965.

Osgood Mackenzie’s mother, Lady Mary, was no less philanthropic than her son and devoted much of her life to improving the lives of the crofters on the estate. In appreciation of her life and work, when the former nurses’ home was built in 1912, it was dedicated In memory of Mary, Lady Mackenzie, with money left for that purpose by Dr Charles Robertson, late of Achtercairn, Gairloch. 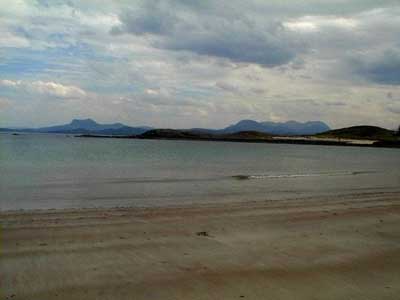 View from Mellon Udrigle. On left Ben Goblach and on right An Teallach.        Attribution: unknown