Index of Surnames of those that served during the Great war

The pages which follow contain extracts from the Ross-shire Journal during the 1914-1918 War. Newspaper copies had been deposited with Dingwall Museum but over the years had become rather fragile and were in danger of disintegrating and so it was felt that this valuable record should not be lost.

As will be obvious, the quality of photographs leaves much to be desired but it has to be remembered that they come from The Ross-shire Journal of 1914-18. If any descendant of these men and women owns “proper” photographs they would like to contribute, Ross and Cromarty Heritage Society will be more than happy to include them. Contact details are on our home page. 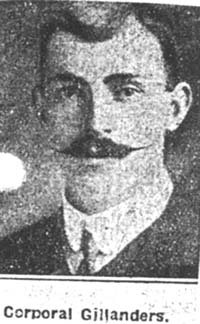 The above is a photograph of Corporal Kenneth Gillanders, Royal Engineers, mentioned in dispatches, who is a son of Mr Gillanders, tailor and clothier, Applecross. He was in the Glasgow Police at the outbreak of war, and immediately joined his regiment, the Royal Engineers. He has been in France since, and has seen much fighting, having had some narrow escapes. His horse was shot under him on two occasions, and in one instance he got cut off from his regiment for two days, and had to work his way back through the enemy’s lines. He has paid two short visits to his home in Cathcart, Glasgow, where his wife resides. Like most soldiers, he says little about himself, but one incident he relates as follows. Being out wire laying one night, he suddenly observed he was covered by a sniper. Instantly bringing his rifle to aim, he covered the sniper, and both fired simultaneously. The German’s bullet passed along the barrel of his rifle, shooting away the lobe of his right ear. His own shot went through the sniper’s brain. Corporal Gillanders, who is a brother-in-law of Constable Donald Ross, Applecross, is a typical soldier, powerfully built, and stands over 6 feet in height.

His cousin, First-Class Petty Officer Alexander Gillanders, HMS Inflexible, has been awarded the DSM for gallant service in the Dardanelles