“How much do we owe you? Just send us the bill.” Mr Friedrich’s bank employers in London.

Two tourists sparked a rescue operation spanning the length of Britain after they ignored “road closed” signs and became stuck on one of Scotland’s highest roads during last weekend’s heavy snow.

London banker Giles Friedrich and his girlfriend came to grief in a blizzard while attempting to drive over the infamous Bealach na Bo road in Wester Ross, a 2000ft hazardous mountain pass.

The road, which leads through the mountains from Kishorn to Applecross in a series of hairpin bends, was closed by council roads crew around 10am on Friday amid severe snow and high winds.

But the couple, who were on their first trip to the Highlands, disregarded the road closed signs and began the ascent instead of taking the longer route around the coast road to Applecross.

The drama began around 11am when Bill Robins, the council’s Ross and Cromarty roads manager, received a telephone call at his Dingwall office – from a Nat West bank in the City of London – to say a couple were stuck on the coast road at Applecross.

Mr Robins said “Apparently Mr Friedrich had just got a new mobile phone and didn’t know his telephone number so he phoned his boss at the Nat West bank”.

“I questioned whether it was the coast road because it had just been ploughed but the caller was adamant that the couple were trapped in their car at a hairpin bend on the coast road.”

Mr Robins radioed a snowplough driver who set off from Applecross, to go to the couple’s aid.

But shortly afterwards Mr Robins received another phone call from the Nat West bank to say it was the hill road, the Bealach, on which the couple were trapped and that they had decided to leave the car and walk to Lochcarron.

Fearing for their safety, Mr Robins alerted the Lochcarron snowplough to turn out and police at Portree.

And his fears mounted when some time later Kenny Black, a senior roads technician at Lochcarron, called Mr Robins to say the couple’s green Ford Focus had been found empty but there was no sign of anybody on the road.

“There was a slight panic then,” said Mr Robins. “It was only about four miles back to Lochcarron but the road was totally blocked and the weather was horrendous. But the next thing is, we get a call from Dot Mackenzie at the Applecross Hotel, the wife of one of our drivers, to say that the couple were at the hotel.”

Luckily for the tourists, they were discovered by members of a Welsh mountain rescue team who were on exercise in the area.

Speaking from the hotel afterwards, Mr Friedrich said, “We saw the road closed sign and were going to go round the long way. Then we met a couple of guys who work for the Hydro Electric and who had just driven over the top. They told us they thought it would be OK.

“But it wasn’t. We got up so far, but no further. The car got stuck, the road was too icy and slippery and the snow and hail was horizontal. Luckily these very kind Welsh people turned up who had also decided to go across the pass and they took us the the hotel in their vehicle. Everything turned out rather well apart from the roads people having to scour the coast for two townies.”

Judith Fish, proprietor at the Applecross Hotel, said, “They were very pleased to get to the hotel. It can be quite atrocious up there. It was the chap’s girlfriend’s birthday – not the best way to spend your birthday.”

Mr Robins revealed that Mr Friedrich’s boss in London had told him, “How much do we owe you? Just send us the bill”.

Tempted though the roads manager must have been to bolster his meagre roads budget, he declined and told him, “We don’t take money for rescuing people in this part of the world”. 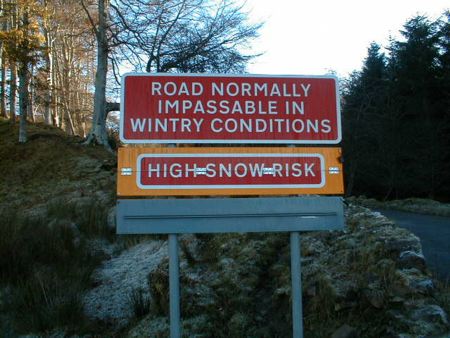 A timely word of warning about the Bealach (not always observed).     Attribution: unknown 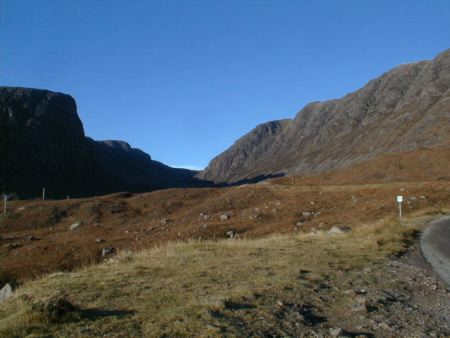 Bealach nam Bo (The Pass of the Cattle) leading from Kishorn to Applecross.        Attribution: unknown 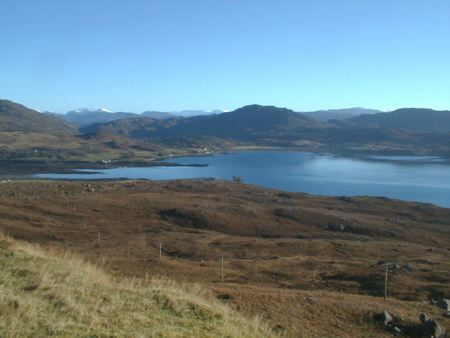 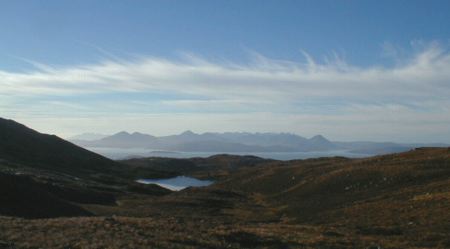