Ye His Saints – The Abbot’s stone

The Abbot’s stone, the most obvious relic of what was believed to be a thriving monastery extending from the river to the hill behind Clachan Burial Ground and the old Parish Church of Applecross. This large unfinished carved stone, set in the ground to the left of the graveyard, originally marked the grave of Ruaraidh Mor MacAgon, Abbot of Applecross, who, according to the Annals of Ulster, died as Abbot of Bangor in AD 801.

St Maelrubha, Ross-shire’s foremost saint, was, like Columba, of royal Irish blood and a member of the monastery of Bangor in Ireland, one of the largest colleges of the Irish Church. Maelrubha left Ireland for Scotland in AD 671 when he was twenty-nine years old. In AD 673 he founded the monastery of Applecross, in Wester Ross, within sight of the Isles of Raasay and Skye. Applecross is known to this day as An Comraich, the Sanctuary. Irish lore claims that St Maelrubha died in Applecross of natural causes on 21 April AD 722, aged eighty.

The Breviary of Aberdeen claims that Maelrubha’s martyrdom occurred at Urquhart, that on the spot where he suffered a wooden chapel was constructed, superseded by the parish church of Urquhart, and that his body was removed from this place and carried to Applecross. St Maelrubha is reputed to have founded settlements at Strathcarron, Contin and Ferintosh on the Black Isle. It was from his church at Ferintosh that he was fleeing from Danish or Norwegian pirates when he was killed. The brethren from the monastery of Applecross carried his body back to Applecross for burial. They stopped on the first night on an island in the River Blackwater, where the parish church of Contin now stands.

In the parish of Gairloch is Loch Maree, once called Loch Ewe, with Kinlochewe still at its head. Through time it has taken the name Maree from one of the islands called Innis Maree. The island, which is situated in the middle of the loch, has an ancient cemetery and it reputedly was once the residence of a good man called Maree, or Mourie or Maelrubha. A similar island in Loch Lomond, called Inch Murrin, was the dwelling place of St Mirin, who established his church in Paisley, west of Glasgow. A fair called Feil Maree used to be held in Contin on the last Wednesday of August and was latterly held in Dingwall. 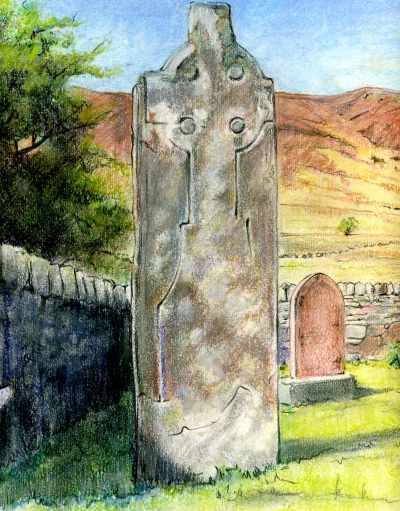